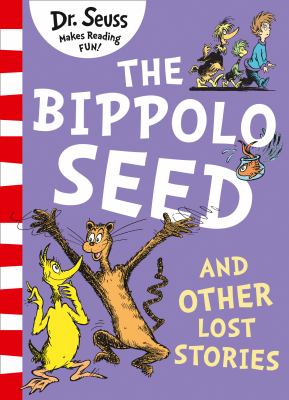 The bippolo seed and other lost stories / by Dr. Seuss.

DDC classification: 813.54 Summary: It's the literary equivalent of buried treasure -- seven newly-discovered, laugh-out-loud stories by Dr. Seuss! The first new Seuss stories to emerge since 1990. Lost for over fifty years, the seven rediscovered stories in this book are wonderfully entertaining, beautifully written and packed with great characters and humour. They include 'The Bippolo Seed,' in which a scheming cat leads an innocent duck to make a bad decision.
Tags from this library: No tags from this library for this title. Log in to add tags.

Presents seven Dr. Seuss stories first published in magazines between 1948 and 1959, with an introduction and commentary on each.

Originally published separately in slightly different form. First published in the UK in 2011.

It's the literary equivalent of buried treasure -- seven newly-discovered, laugh-out-loud stories by Dr. Seuss! The first new Seuss stories to emerge since 1990. Lost for over fifty years, the seven rediscovered stories in this book are wonderfully entertaining, beautifully written and packed with great characters and humour. They include 'The Bippolo Seed,' in which a scheming cat leads an innocent duck to make a bad decision.

This volume collects seven joyous Seuss stories that were published in Redbook in 1950 and 1951 but had never appeared in book form. In an insightful introduction, Seussian scholar Charles D. Cohen notes that Seuss wrote these tales at a transitional point in his career, when he grasped the importance of using the sounds of words to hook children on reading. The stories' rhymed couplets are pitch-perfect, the verse's rhythm as snappy as in any of Seuss's better-known works. In the title story, a duck and a cat's greed spins out of control as they imagine everything that they'll wish for from a magical seed. In "Steak for Supper," an outlandish menagerie follows a boy home to dine: "A Nupper for supper! A Gritch! And a Grickle!/ And also an Ikka! Oh, boy! What a pickle!" These creatures and others are portrayed with Seuss's trademark exaggeration and whimsy. The limitations of the source material are occasionally apparent-the longer stories overcrowd certain pages with text, the artwork sometimes feeling stretched to fit the format. Regardless, fans old and young will deem these "lost" stories a tremendous find. Ages 6-9. (Sept.) (c) Copyright PWxyz, LLC. All rights reserved.

K-Gr 6-Seven stories published in magazines from 1948 to '59 appear with their original texts and illustrations, all of which have been technologically enhanced. In a lengthy introduction, Seuss scholar Charles D. Cohen describes his research in uncovering these stories and the ways in which they resonate with familiar Seussian elements and themes. Youngsters see the folly of greed when the duck in "The Bippolo Seed" wants more than he needs and ends up with nothing. The message in "The Rabbit, the Bear, and the Zinniga-Zanniga" is that, ".when you fight with Big Guys.../A bit of Quick-Thinking/counts much more than size!" An illustration of the foolish bear atop the tree while the rabbit escapes adds to the fun. "Gustav, the Goldfish" and "The Strange Shirt Spot" demonstrate the consequences of not following the rules. Unable to settle on one occupation, the protagonist in "The Great Henry McBride" dreams big, convincing himself and children everywhere that they can be and do anything. The delightful rhythm, tongue-tickling language, and trademark art exemplify how Seuss's work has delighted generations of readers and made learning to read fun.-Marianne Saccardi, formerly at Norwalk Community College, CT (c) Copyright 2012. Library Journals LLC, a wholly owned subsidiary of Media Source, Inc. No redistribution permitted.

Seven rhymed tales, dug from hard to find places! Look for millions of Seuss fans with bright shiny faces!As Seuss scholar Charles D. Cohen notes in his buoyant introduction, the storiesall published in magazines in the early 1950s, but never elsewhere except, for some, in audio editionscatch Ted Geisel at the time he gave over writing in prose, inspired by new insight into the capacity of children to absorb and enjoy words and word sounds. His command of language and cadence is sure, while the pedantry that sometimes weighed down his later work is also visible but only lightly applied: Extreme greed leads to the loss of a wish-granting seed in the title story, for instance, and an overfed "Gustav, the Goldfish" outgrows every container. (The latter story is an early version of an unrhymed tale published by Seuss' first wife, Helen Palmer, as A Fish Out Of Water.) In other premises that saw service elsewhere, "The Great Henry McBride" ambitiously daydreams of future careers, and a "Strange Shirt Spot" keeps moving from place to place despite a frantic lad's efforts to remove it. The buffed-up illustrations look brand new, and despite occasional signs of age"Oranges! Apples! And all kinds of fruits! / And nine billion Hopalong Cassidy suits!"the writing is as fresh, silly and exhilarating as it must have been when first seen.The good Doctor may be dead these 20 years, but he's still good for splendid surprises. (Picture book. 6-9)]] Copyright Kirkus Reviews, used with permission.
More book reviews at iDreamBooks.com