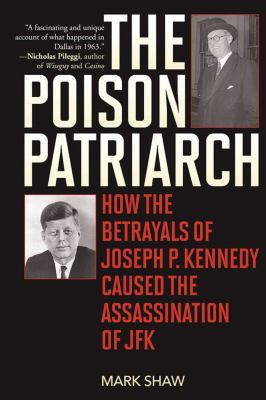 The poison patriarch : how the betrayals of Joseph P. Kennedy caused the assassination of JFK / Mark Shaw.

DDC classification: 973.922092 Summary: This book presents a new assessment of what happened in Dealey Plaza fifty years ago and asks why President Kennedy was murdered in 1963 instead of his Attorney General brother.
Tags from this library: No tags from this library for this title. Log in to add tags.
No physical items for this record

Focusing for the first time on why attorney general Robert F. Kennedy wasn't killed in 1963 instead of on why President John F. Kennedy was, Mark Shaw offers a stunning and provocative assassination theory that leads directly to the family patriarch, Joseph P. Kennedy.

Shaw addresses these tantalizing questions:
Why, shortly after his brother's death, did a grief-stricken RFK tell a colleague, "I thought they would get one of us . . . I thought it would be me"? Why was Belli, an attorney with almost no defense experience (but proven ties to the Mafia), chosen as Jack Ruby's attorney? How does Belli's Mafia connection call into question his legal strategy, which ultimately led to the Ruby's first-degree murder conviction and death sentence? What was Joseph Kennedy's relationship to organized crime? And how was his insistence that JFK appoint RFK as attorney general tantamount to signing the president's death warrant?
For fifty years, Shaw maintains, researchers investigating the president's murder in Dallas have been looking at the wrong motives and actors. The Poison Patriarch offers a shocking reassessment--one that is sure to alter the course of future assassination debates.

This book presents a new assessment of what happened in Dealey Plaza fifty years ago and asks why President Kennedy was murdered in 1963 instead of his Attorney General brother.

Using as his fulcrum Melvin Belli's role as Jack Ruby's defense attorney at Ruby's 1964 trial for the murder of Lee Harvey Oswald, Shaw (Melvin Belli, King of the Courtroom) notes the degrees of separation among Ruby, Belli, and JFK's father, Joseph P. Kennedy. Where does responsibility for JFK's murder lie? You can either be satisfied with the title's answer or dig in! Shaw zealously explains his reasoning: Belli was a personal-injury lawyer, not a criminal defense attorney. So why was he selected to defend Ruby? Because he had ties to mobster Mickey Cohen, who had ties to mobster Carlos Marcello, who had ties to mobster Sam Giancana. These mobsters had underworld ties to Jack Ruby and his lowbrow Dallas nightclub. For them, Belli could defend Ruby as deluded and insane. You see, JFK was elected with the alleged help of Giancana's labor bosses bringing out votes. But then JFK's father made "an ill-fated decision..., one that changed the course of history...." It would be "hearsay" in a court of law, but Shaw quotes someone who quotes someone who quotes JFK that it was his father who told him to appoint brother Robert as attorney general. RFK's expanded mob prosecutions then made the mob feel betrayed. RFK thought he might be putting himself at risk in pursuing racketeers, but the mob decided to shoot the "dog" instead of its "tail." So it was all Joe's fault. VERDICT Shaw says that his information is "fresh," but it sounds familiar. Voracious conspiracy theorists can read it and decide.-MH (c) Copyright 2013. Library Journals LLC, a wholly owned subsidiary of Media Source, Inc. No redistribution permitted.

Did a well-known society lawyer keep the secrets of the assassination of President John F. Kennedy? Title aside, only the final chapters of the book examine the toxic biography of Joseph P. Kennedy. Instead, Shaw takes an unusual route into the thicket of JFK conspiracy literature, focusing on the perturbing question of why the flamboyant civil attorney Melvin Belli, an associate of mobsters, would have been recruited to provide Jack Ruby's defense following his televised shooting of Lee Harvey Oswald. Belli pursued a strange "psychomotor epilepsy insanity defense," here termed "absurd," which failed at trial; Ruby died in 1967 awaiting a new trial after his subsequent death sentence was overturned on appeal. Later, Belli avoided the topic, telling conflicting stories about how he came to represent Ruby. Gangster Santo Trafficante supposedly warned notorious mob attorney Frank Ragano--whose memoir, closely examined by Shaw, implicates Jimmy Hoffa and others in the conspiracy--to never ask Belli about Ruby. Thus, Shaw argues that "probing Belli's behavior before, during and after the Ruby case is essential to any search for the truth" about the killings. Certainly, Belli seems capable of obfuscation; the author portrays him as "a braggart of the first degree [and] a Mafia groupie." Shaw finds it suspect that Belli's trial gambit was to make Ruby look "crazy when no one else in the real world thought he was" and ultimately argues that Belli was a plant meant to subtly control Ruby. The problem, as with most JFK assassination conspiracy theories, is the difficulty of directly connecting Belli's curious behavior to the purported Mafia assassination conspiracy. A clearly written but fevered polemic on the corruption of power, built around an intriguing theory, but it lacks a smoking gun.]] Copyright Kirkus Reviews, used with permission.
More book reviews at iDreamBooks.com