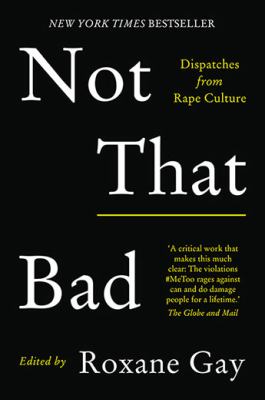 Not that bad : dispatches from rape culture / edited by Roxane Gay.

DDC classification: 364.1532 Summary: Searing and heartbreakingly candid, this provocative collection both reflects the world we live in and offers a call to arms insisting that ""not that bad"" must no longer be good enough.
Tags from this library: No tags from this library for this title. Log in to add tags.

Searing and heartbreakingly candid, this provocative collection both reflects the world we live in and offers a call to arms insisting that "not that bad" must no longer be good enough.

Searing and heartbreakingly candid, this provocative collection both reflects the world we live in and offers a call to arms insisting that ""not that bad"" must no longer be good enough.

Rape culture is examined in this stellar collection edited by National Book Critics Circle finalist Gay (Hunger; Bad Feminist) because as a society we use the term often but rarely engage with it. What are the effects of being taught to downplay sexual violence, to convince yourself it's not that bad? A recurring topic among contributors is whether to use the term victim or survivor; writer AJ McKenna says, "If I say I have survived, I'm fooling nobody. I didn't." Actress Ally Sheedy discusses decades-long sexism in Hollywood, educator and writer Sharisse Tracey takes on the myth of the perfect black family, actress Gabrielle Union navigates explaining consent to her stepsons, and author Amy Jo Burns revisits the cost of staying silent. Particularly insightful is writer Michelle Chen's exploration into the safety of women in migrant camps. Some share experiences of street harassment or witnessing public masturbation and the mind-set that it's an honor to be objectified. Gay succeeds in bringing men's and women's voices to the conversation, showing the broad influence of sexuality, race, and faith. VERDICT A standout collection on a crucial topic. That some parts may be difficult to read owing to details of sexual violence makes these essays even more necessary.-Stephanie Sendaula, Library Journal © Copyright 2018. Library Journals LLC, a wholly owned subsidiary of Media Source, Inc. No redistribution permitted.

Though her gang rape at age 12 was devastating, author Gay minimized her pain after talking to other women who had faced harassment, rape, and sexual assault. "What I went through was bad, but it wasn't that bad," she attempted to convince herself. The incisive essays she has compiled by artists, journalists, actors, and others cover a range of experiences yet all speak to the power of rape culture: yes, it is that bad. These deeply personal pieces lay bare the forces that allow sexual violence to flourish: society's expectation that women internalize blame, men's entitlement to women's bodies, and the normalization of assault. Sharisse Tracey describes the pressure from her community to forgive her father for raping her when she was a teen; V.L. Seek's probing "Utmost Resistance" examines the burden of studying rape cases in law school as a survivor. Several contributors emphasize that groping, cat-calling, and indecent exposure are acts of violence, too, making the book potentially eye-opening to readers who may see such experiences as unpleasant yet acceptable. VERDICT This potent volume slowly but surely chisels away at rape culture. A must for YA collections.-Mahnaz Dar, School Library Journal © Copyright 2018. Library Journals LLC, a wholly owned subsidiary of Media Source, Inc. No redistribution permitted.
More book reviews at iDreamBooks.com