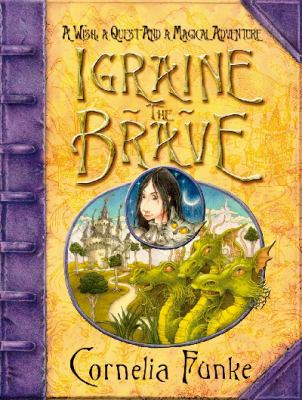 Igraine the brave / by Cornelia Funke, with illustrations by the author ; translated from the German by Anthea Bell.

An adventure is what Igraine wishes for most in the world - and on her twelfth birthday she finds one! Everyone at Castle Pimpernel is looking forward to Igraine's birthday. But when her magical present goes wrong and her parents turn themselves into pigs, it's up to Igraine to put things right - even if that means facing giants, three-headed dragons and a particularly Spiky Knight.

Falling into the Funke-lite category of fantasy (more Dragonrider than Inkheart), young listeners, especially girls, will be eager to find adventure with the irrepressible heroine of this sprightly adventure. Igraine longs to leave boring life at Pimpernel Castle and be a famous knight-unheard of, of course, for a girl. But when the magic of her sorcerer parents goes awry and they turn themselves into pigs at the very moment that nefarious necromancers gather to attack, Igraine is called to undertake a courageous and crucial quest. British actress Elbrick makes 12-year-old Igraine's frustration and exasperation palpable without sounding overwrought. And by giving the protagonist a youthful, yet confident and strong, vocal delivery, she helps listeners truly believe in Funke's characterization of Igraine. Additional solid portrayals-a sorrowful knight with an Americanized accent, a mostly friendly giant and singing books of magic, go far to create a lighthearted and colorful setting. Ages 8-up. Simultaneous release with the Scholastic/Chicken House hardcover (Reviews, Sept. 10). (Sept.) (c) Copyright PWxyz, LLC. All rights reserved

Gr 3-6-Igraine, the heroine of this medieval tale, wants something different from life. Her parents and her brother are magicians, and she considers their work "dreadfully boring." Instead, she longs to be a brave knight who has adventures and wins tournaments. When Osmund the Greedy and his army arrive at the gates of her ancestral castle, she gets a chance to prove herself. Her parents have given her a suit of magical armor for her 12th birthday but then a few complications arise that interfere with her grand plans. These challenges start when her parents make a magical error that turns them into unmagical pigs. Now Igraine must find a giant willing to give up his hair to save them. Along the way she must also help a sorrowful knight and rescue a gentle giant from hunters. Although her courage is challenged, Igraine is a resourceful heroine whose feisty demeanor will have readers rooting for her success. Funke's whimsical pen-and-ink illustrations are a good match for this spirited tale. The story has many twists and turns and an engaging heroine who rises to the challenge. Readers will eagerly join her on her quest, and younger children will enjoy an exciting read-aloud as this valiant knight saves the day.-Carole Phillips, Greenacres Elementary School, Scarsdale, NY (c) Copyright 2010. Library Journals LLC, a wholly owned subsidiary of Media Source, Inc. No redistribution permitted.

First published in Germany in 1998, this fantasy opens on the day before Igraine's twelfth birthday. Igraine lives in a very old castle, guarded by stone lions that roar at approaching strangers. Her older brother is a magician-in-training; Igraine plans to become a knight. When their castle is besieged by Osmund the Greedy and his evil henchman, Rowan Heartless, Igraine, her family, and their newfound champion, the Sorrowful Knight, work together to defeat their treacherous opponents. Children will find this a more down-to-earth, appealing fantasy, with an element of humor (Igraine's parents accidentally turn themselves into pigs) as well as a heroine whose knightly ambitions and ideals are taken seriously by her family. Among Funke's most imaginative and lovable creations are the walking, talking, snacking Books of Magic that the villains are plotting to steal. Funke's lively ink drawings introduce the characters, decorate the beginnings and ends of chapters, and occasionally provide large illustrations of the setting and action. A good read-aloud choice.--Phelan, Carolyn Copyright 2007 Booklist

The author of Princess Knight (2004) offers a longer tale along the same lines, here in its first English translation. Uninterested in becoming a magician like her parents and older brother, Igraine delights in feats of arms. Though a spellcasting error--that transforms her parents into non-magical pigs--casts a shadow on her 12th birthday, she is dazzled by the suit of magic armor they present her. It arrives just in time, too, because shortly thereafter, thuggish Osmund the Greedy arrives at the castle gates with an army, intent on seizing the resident library of talking grimoires. Will the castle's magical defenses hold out long enough for Igraine to steal a fast horse from under Osmund's nose, find a giant willing to give up the hair necessary for a parent-restoring spell, rescue an unaggressive dragon from hunters and help a sad knight who teaches her the rules of chivalry to defeat Osmund's supposedly undefeatable Castellan? Do you doubt? Illustrated with pen-and-ink sketches of Igraine in action, plus many tiny tomes sporting stubby limbs and animated faces, this engaging read, or read-aloud, is "joust" the ticket for all young fans of non-gender-specific knightly valor. (Fantasy. 9-11) Copyright ©Kirkus Reviews, used with permission.
More book reviews at iDreamBooks.com