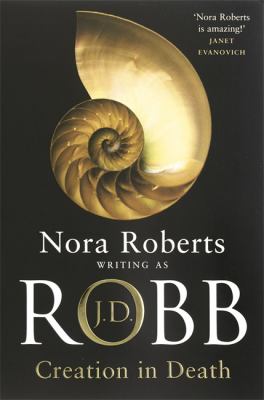 Genre/Form: Detective and mystery fiction. | Thrillers (Fiction)DDC classification: 813.54 Subject: Lieutenant Eve Dallas keeps the streets of a near-future New York City safe in this extraordinary series. But even she makes mistakes, and is haunted by those she couldn't save, and the killers she couldn't capture.
Tags from this library: No tags from this library for this title. Log in to add tags.
Fiction notes: Click to open in new window

Lieutenant Eve Dallas keeps the streets of New York City safe in this extraordinary series. But even she makes mistakes, and is haunted by those she couldn't save-and the killers she couldn't capture. When the body of a young brunette is found in East River Park, marked by signs of prolonged and painful torture, Eve is catapulted back to nine years ago. A man the media tagged The Groom-because he put silver rings on the fingers of his victims-had the city on edge with a killing spree that took the lives of four women in fifteen days. But now, The Groom has returned-and Eve's determined to finish him. Familiar with his methods, Eve knows that he has already grabbed his next victim. When it turns out that the dead woman was employed by Eve's billionaire husband, Roarke, she brings him onto the case-a move that proves fitting when it becomes chillingly clear that the killer has made it personal. And chances are that he's working up to the biggest challenge of his illustrious career-abducting a woman who will test his skills on every level and who promises to give him days and days of pleasure before she dies: Eve.

Lieutenant Eve Dallas keeps the streets of a near-future New York City safe in this extraordinary series. But even she makes mistakes, and is haunted by those she couldn't save, and the killers she couldn't capture.

NYPSD lieutenant Eve Dallas is back, and so is the Groom, a nasty serial killer Eve battled ten years earlier who has made his latest spree personal. (c) Copyright 2010. Library Journals LLC, a wholly owned subsidiary of Media Source, Inc. No redistribution permitted.

At 27 books and counting, Nora Roberts is more prolific under her Robb pseudonym than most authors manage in a single career. Yet the latest in her not-so-near-future detective series featuring New York Police Det. Eve Dallas offers a satisfyingly novel melange of suspense, sex, forensics and heroics. It's 2060, and the serial killer nicknamed "The Groom" is back in town after an absence of nine years, resuming his horrific run of kidnapping, torturing and killing young women. Dallas, who served as a detective in the frustrating first investigation, assumes lead role in this one. This time, not only do the killer's chosen victims have ties to Dallas's husband, Roarke, but Dallas herself may be the killer's ultimate target. Swiftly paced, the story cuts frequently from the investigation to the killer's "progress" with his victims. Dallas works to outplan, outfight and outsmart the killer; to keep her handsome, rich husband happy; and to be ready for the next round after a good night's sleep. Robb's latest is bound to please Dallas fans. (Nov.) (c) Copyright PWxyz, LLC. All rights reserved
More book reviews at iDreamBooks.com