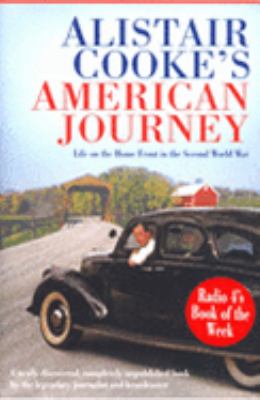 Alistair Cooke's American journey : life on the Home Front in the Second World War / with a foreword by Harold Evans.

Alistair Cooke, then a Washington correspondent for The Guardian , recognized a great story to be told in investigating at first hand the effects of the Second World War on America and the daily lives of Americans as they adjusted to radically new circumstances. Within weeks of the Pearl Harbor attack, with a reporter's zeal, Cooke set off on a circuit of the entire country to see what the war had done to people. He talked to everyone he encountered on his extensive trip, from miners to lumberjacks, to war-profiteers, to day-laborers, to local politicians - even the unfortunate Japanese-Americans who had been rapidly interned in stark, desert camps.

Intertwined with his reflections on changing landscapes and cityscapes and with his unique storytelling skills and insight, his acute ability to define detail and catch the sounds and syntax of different regional accents, this is Alistair Cooke moving into his prime as a reporter and a writer.

Introduction to a war -- A passport to the people -- Through the Appalachians to the pioneers -- Deep down South -- The Gulf Coast -- The Southwest -- Westward the course of empire -- The Pacific Northwest -- The Great Plains -- From wheat to steel -- The rise and fall of New England -- Epilogue: four months in 1945 -- Envoi.

"Shortly before his death in 2004, Alistair Cooke's personal secretary discovered in his New York study what Cooke had long believed was a lost manuscript: an entirely unpublished and extraordinary account of his travels through America during the Second World War." "This unique travelogue and time capsule celebrates an essential American character and the indomitable spirit of a nation that was to inspire Cooke's reports and broadcasts for some sixty years."--BOOK JACKET.