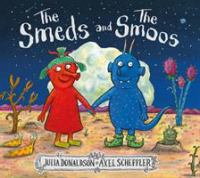 The Smeds and the Smoos / Julia Donaldson ; illustrated by Axel Scheffler.

Summary: The Smeds (who are red) never mix with the Smoos (who are blue). So when a young Smed and Smoo fall in love, their families strongly disapprove. But peace is restored and love conquers all in this happiest of love stories. There's even a gorgeous purple baby to celebrate!
Total holds: 0

<p> </p> Soar into space with this glorious love story of alien folk, from the creators of The Gruffalo and Stick Man. <p>The Smeds (who are red) never mix with the Smoos (who are blue).</p> <p>So when a young Smed and Smoo fall in love, their families strongly disapprove.</p> <p>But peace is restored and love conquers all in this happiest of love stories. There's even a gorgeous purple baby to celebrate!</p> With fabulous rhymes and breathtaking illustrations, this book is literally out of this world! From the creators of The Gruffalo, Stick Man and ZOG , which have all been made into animated films shown on BBC1 Zog and the Flying Doctors animation will be shown on BBC1 December 2020.

The Smeds (who are red) never mix with the Smoos (who are blue). So when a young Smed and Smoo fall in love, their families strongly disapprove. But peace is restored and love conquers all in this happiest of love stories. There's even a gorgeous purple baby to celebrate!

Longtime collaborators Donaldson and Scheffler (The Gruffalo) convey this story of star-crossed lovers with their customary vim. "By a loobular lake on a far-off planet" lives Janet, a Smed with red skin, green hair, and a long snout; and Bill, a Smoo with polka-dotted blue skin, orange horns, and spotted green slippers. Forbidden by their grandparents to pair up ("Never, never marry a Smoo..../ They drink black tea!/ They eat green stew!"), the two eventually elope. As their families travel the galaxy together in hot pursuit, they discover just how diverse worlds can be, and gradually let their guard down with each other. Back home, another discovery awaits: Janet and Bill are new parents of "A red one? A blue one? But no--/That baby was purple, from head to toe!" The Sneetches-esque story bogs down a bit under its Seussian vocabulary ("Janet met Bill in the Wurpular Wood,/ Where the trockles grew tall/ and the glompoms smelled good"). But the timely message of inclusivity is proffered unmistakably, and with a panoply of adorable creatures to boot. Ages 4--8. (Nov.)

In their newest book, the writer and illustrator best known for The Gruffalo (1999) introduce two neighboring groups of aliens on a faraway planet. Young Smeds are taught not to mingle with the Smoos, who are blue. Young Smoos learn to shun the Smeds, who are red. But while the Smeds splash about in their lake, and the Smoos bounce around on their hill, Janet (a Smed) and Bill (a Smoo) befriend each other in the woods. When their elders object, they fly away one night in the Smeds' spaceship. Soon Smeds and Smoos alike take off in the Smoos' spaceship to search for them. During the trip, they come to respect each other. Returning home, they're overjoyed to find Bill, Janet, and their purple baby, who is beloved by all. Donaldson's songwriting roots are evident in the rhythmic, rhyming, flowing narrative, while Scheffler's vibrant mixed-media artwork captures the amiable tone of the text. Equally reminiscent of Shakespeare's Romeo and Juliet and Seuss' "The Sneetches," this rollicking picture book delivers its message with humor and heart.

Donaldson and Scheffler (most recently The Ugly Five, rev. 9/18) tell the story of the red Smeds and the blue Smoos, who share a far-off planet but deeply distrust each other (as the Smeds are warned: "Never, never play with the Smoos. / They sleep in holes. They wear strange shoes"). The antipathy goes unquestioned -- until Smed Janet and Smoo Bill form a friendship. Rhyming couplets are peppered with nonsense words that, a la Dr. Seuss or Carroll's "The Jabberwocky," still somehow make sense; for example, "Janet met Bill in the Wurpular Wood, / Where the trockles grew tall / and the glompoms smell good." Scheffler's ink-and-watercolor pictures have a zany cartoonish feel, paying homage to Seuss. The alien planet features a variety of comical flourishes, including quirky plants with teeth, spikes, or eyes; each surrounding planet, too, has its own distinct character. Donaldson's message is clear without being heavy-handed, with a satisfying final scene of harmonious joy over the new (purple) baby and the Smeds and Smoos, young and old, celebrating under the "silvery squoon." Susan Dove Lempke March/April 2021 p.54(c) Copyright 2021. The Horn Book, Inc., a wholly owned subsidiary of Media Source, Inc. No redistribution permitted.

Two youngsters from mutually hostile groups connect. This tale of prejudiced extraterrestrials jumps immediately into rollicking verse. "By a loobular lake on a far-off planet / There lived a young Smed, / and her name was Janet. / Not far away, on a humplety hill, / There lived a young Smoo / by the name of Bill." The patter and nonsense words (wurpular, trockle) invoke Dr. Seuss. Smeds and Smoos alike have antennae and tubular noses, but Smeds, red, have webbed feet they wear bare while Smoos, blue, sport elflike boots. The illustrations' eye-catching colors are intensely saturated throughout, sometimes jarringly so. Despite parallel contemptuous commands to "Never, never play with" the other group, Janet and Bill secretly bond and grow up to marry. "Janet and Bill stole out that night / While their families slept / and the squoon shone bright. / They clambered into the Smeds' red rocket. / (Grandfather Sned had forgotten to lock it.) / Bill pressed the button, and Janet steered… // …When their families woke, they had both disappeared!" A multiplanet search leads to reconciliation and integration. This unsubtle metaphor for fixing racism and xenophobia ignores real-world power imbalances: The Smeds and Smoos may distrust one another, but they share equal status. Moreover, the notion that interracial couples and mixed-race offspring--a purple Smed/Smoo baby--are a solution for racism is false and places an unfair burden on mixed-race readers. Rip-roaring verse but painfully simplistic messaging. (Picture book. 4-7) Copyright (c) Kirkus Reviews, used with permission.