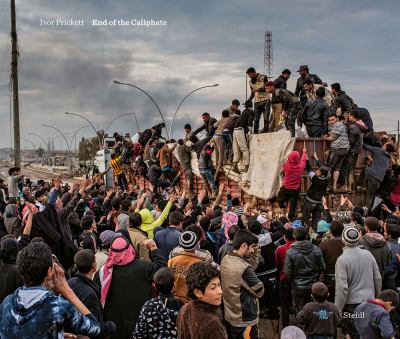 End of the Caliphate / Ivor Prickett ; with an essay by Anthony Loyd.

This book is the result of over a year's work in 2016 and 2017 photographing the military campaign to reclaim Iraq's second largest city, Mosul, from ISIS. Working exclusively for the New York Times, Ivor Prickett was often embedded within Iraqi special forces troops as he documented both the fi ghting and its toll on the civilian population and urban landscape. The operation lasted nearly nine months, resulted in thousands of civilian deaths and ruined vast tracts of the city. Involving some of most brutal urban combat since World War II, the fall of Mosul was key to the downfall of the Islamic State: soon after the remains of the so-called "Caliphate" quickly collapsed. Prickett focuses on the human struggles of confl ict. Taken on the frontline, his pictures legitimately and compellingly record the experience of being "caught in the crossfi re," whether as a soldier or non-combatant. He furthermore captures post-war reality while attempting to reconstruct the fi nal weeks of combat: the devastated city including abandoned corpses of ISIS fi ghters, and, months later, families searching for missing loved ones, and civilians returning to reclaim their homes and lives.