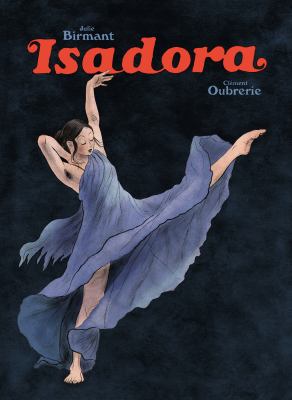 By: Self Made Hero.

"There was never a place for [Isadora Duncan] in the ranks of the terrible, slow army of the cautious. She ran ahead, where there were no paths." - Dorothy Parker

In 1899, performing in the drawing rooms of London's elite, Isadora Duncan was already laying the foundations for modern dance. The 22-year-old's movements were visceral, free-flowing, and expressive; she performed barefoot. She shattered the conventions of traditional ballet and, in doing so, enchanted high society. A year later, in Paris, she met the sculptor Auguste Rodin, whose work proved a revelation, and the influential dancer Loie Fuller, whose support marked the beginning of a dazzling on-stage career.

In Isadora, Julie Birmant and Clément Oubrerie capture the astonishing life and scandalous times of the so-called "Mother of Modern Dance." This extraordinary graphic novel takes in her arrival in Europe, her rise to stardom and the development of a style of dance - inspired by natural forms and Greek sculpture - that would become her enduring legacy.

Meet the mother of modern dance, Isadora Duncan, in this full-color graphic biography. Duncan bucked every tradition she ever encountered, and her unique style on stage mirrored the way she approached life with improvised, unpredictable gestures. Though California-born, her life, fame, and notoriety were built across Europe. This tome, darkly colored, appropriately reflecting a hazy WWI era, tells the tale of a young woman whose resistance of convention took her to the heights of celebrity and a painful fall from glory. The work is bookended by narratives centering on the tumult that was Duncan's short-lived marriage to Russian poet Sergei Yesenin, which unfortunately (and falsely) suggests that her life orbited about this relationship. The artwork's blacks and grays effectively convey the multiple tragedies therein. The creators could have been more transparent about their process of research in recreating the life of this historical figure by adding some notes or citations. The work is for readers already somewhat familiar with Duncan's impact as a pioneer in the world of dance and those seeking a fearless, self-made heroine.--Katrina Spencer Copyright 2019 Booklist
More book reviews at iDreamBooks.com