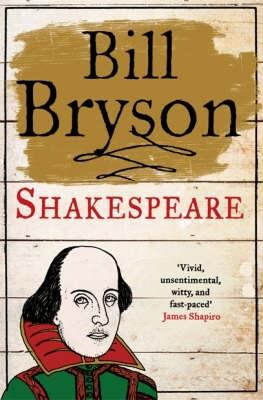 Bill Bryson's biography of William Shakespeare unravels the superstitions, academic discoveries and myths surrounding the life of our greatest poet and playwright.

Not a biography but a walk in the woods with the actors, academics, curators, and others who love Shakespeare. (c) Copyright 2010. Library Journals LLC, a wholly owned subsidiary of Media Source, Inc. No redistribution permitted.

Considering the hundreds of thousands of words that have been written about Shakespeare, relatively little is known about the man himself. In the absence of much documentation about his life, we have the plays and poetry he wrote. In this addition to the Eminent Lives series, bestselling author Bryson (The Life and Times of the Thunderbolt Kid) does what he does best: marshaling the usual little facts that others might overlook-for example, that in Shakespeare's day perhaps 40% of women were pregnant when they got married-to paint a portrait of the world in which the Bard lived and prospered. Bryson's curiosity serves him well, as he delves into subjects as diverse as the reliability of the extant images of Shakespeare, a brief history of the theater in England and the continuing debates about whether William Shakespeare of Stratford-upon-Avon really wrote Shakespeare's works. Bryson is a pleasant and funny guide to a subject at once overexposed and elusive-as Bryson puts it, "he is a kind of literary equivalent of an electron-forever there and not there." (Nov.) (c) Copyright PWxyz, LLC. All rights reserved

Humorous travel writer Bryson doesn't seem the obvious choice for a Shakespeare biography, but he does the job quite wonderfully by sticking to the facts about Shakespeare's life. Those are very few, so most Shakespeare biographers proceed more or less imaginatively. Not Bryson. He instead brings amused but understanding skepticism to what his forebears have posited about each period of Shakespeare's life and constructs a plausible continuity from their most persuasive ideas and what other sources reveal about Shakespeare's milieu. As he proceeds, he doesn't so much shatter illusions as reveal how creative biography and historiography must be at 400 years' remove from their subjects' physical existence. The records just don't exist to make them less conjectural. It even turns out that today's restored Globe Theatre doesn't and can't reproduce Shakespeare's Globe. But if Shakespeare is hard to document, there is at least one other of his contemporaries who is impossible to trace whoever wrote his plays instead of him and Bryson splendidly concludes a splendid book by demolishing the claims for Bacon, Marlowe, Oxford, and all.--Olson, Ray Copyright 2007 Booklist

A telling glance at one of history's most famously unknowable figures. As sometimes happens with expatriates, journalist Bryson (The Life and Times of the Thunderbolt Kid: A Memoir, 2006, etc.) often turned his attention to his native America during his 20-year residence in England (Made in America, 1995, etc.). Apparently he's now been back home long enough to look the other way in this 12th volume in James Atlas's well-received Eminent Lives series. And who better fits the bill for this assortment of brief biographies than Shakespeare, the literary behemoth who practically defines the Western canon yet boasts a CV that could hardly be slimmer. As the typically wry Bryson observes, "It is because we have so much of Shakespeare's work that we can appreciate how little we know of him as a person....faced with a wealth of text but a poverty of context, scholars have focused obsessively on what they can know." Bryson is just as happy to point out what we can't. To him, Shakespeare is the "literary equivalent of an electron--forever there and not there." Indeed, he makes so much of the fact that so much has been made from the singularly few known facts of the Bard's life that one might say this thin volume's raison d''tre is to identify the many paradoxes surrounding all things Shakespeare, which Bryson candidly illuminates in several deft turns of phrase. That is as good a tack as any to take in this sort of Cliffs Notes-style overview of the rich afterlife and times of Shakespeare, recognized as great, Bryson claims, for his "positive and palpable appreciation of the transfixing power of language"--a point on which even those who don't believe Shakespeare was Shakespeare would agree, and a trait he happens to share with his biographer. Shakespeare redux for the common reader. Copyright ©Kirkus Reviews, used with permission.
More book reviews at iDreamBooks.com