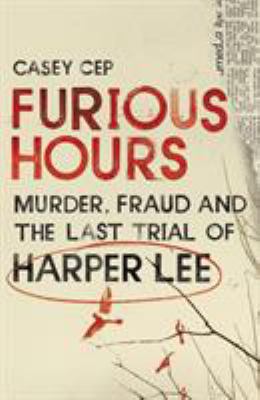 Genre/Form: True crime stories.DDC classification: 364.15232092 Summary: Alabama, 1972. The stunning true story of an Alabama serial killer, and the trial that obsessed the author of To Kill a Mockingbird in the years after the publication of her classic novel a complicated and difficult time in her life that, until now, has been very little examined.
Tags from this library: No tags from this library for this title. Log in to add tags.

' A triumph on every level . One of the losses to literature is that Harper Lee never found a way to tell a gothic true-crime story she'd spent years researching. Casey Cep has excavated this mesmerizing story and tells it with grace and insight and a fierce fidelity to the truth. '
DAVID GRANN, author of Killers of the Flower Moon
_____________________________
The stunning story of an Alabama serial killer and the true-crime book that Harper Lee worked on obsessively in the years after To Kill a Mockingbird

Reverend Willie Maxwell was a rural preacher accused of murdering five of his family members for insurance money in the 1970s. With the help of a savvy lawyer, he escaped justice for years until a relative shot him dead at the funeral of his last victim. Despite hundreds of witnesses, Maxwell's murderer was acquitted - thanks to the same attorney who had previously defended the Reverend.

As Alabama is consumed by these gripping events, it's not long until news of the case reaches Alabama's - and America's - most famous writer. Intrigued by the story, Harper Lee makes a journey back to her home state to witness the Reverend's killer face trial. Lee had the idea of writing her own In Cold Blood, the true-crime classic she had helped her friend Truman Capote research. She spent a year in town reporting on the Maxwell case and many more years trying to finish the book she called The Reverend .

Now Casey Cep brings this story to life, from the shocking murders to the courtroom drama to the racial politics of the Deep South. At the same time, she offers a deeply moving portrait of one of America's most beloved writers and her struggle with fame, success and the mystery of artistic creativity.

This is the story Harper Lee wanted to write. This is the story of why she couldn't.
_____________________________
' Fascinating ... Cep has spliced together a Southern-gothic tale of multiple murder and the unhappy story of Lee's literary career, to produce a tale that is engrossing in its detail and deeply poignant ... Cep spends the first third of Furious Hours following the jaw-dropping trail of murders ... Engrossing ... Cep writes about all this with great skill, sensitivity and attention to detail .'
SUNDAY TIMES

' It's been a long time since I picked up a book so impossible to put down . Furious Hours made me forget dinner, ignore incoming calls, and stay up reading into the small hours. It's a work of literary and legal detection as gripping as a thriller . But it's also a meditation on motive and mystery, the curious workings of history, hope, and ambition, justice, and the darkest matters of life and death. Casey Cep's investigation into an infamous Southern murder trial and Harper Lee's quest to write about it is a beautiful, sobering, and sometimes chilling triumph .'
HELEN MACDONALD, author of H is for Hawk

'This story is just too good ... Furious Hours builds and builds until it collides with the writer who saw the power of Maxwell's story, but for some reason was unable to harness it. It lays bare the inner life of a woman who had a world-class gift for hiding ... this book makes a magical leap, and it goes from being a superbly written true-crime story to the sort of story that even Lee would have been proud to write .'
MICHAEL LEWIS, author of Moneyball and The Big Short

Alabama, 1972. The stunning true story of an Alabama serial killer, and the trial that obsessed the author of To Kill a Mockingbird in the years after the publication of her classic novel a complicated and difficult time in her life that, until now, has been very little examined.

In the late 1970s, while still struggling to write a follow-up to To Kill a Mockingbird, novelist Harper Lee went to Alexander City, AL, to learn everything she could about the mysterious life and public death of Willie Maxwell, Jr. Maxwell, a local preacher, rumored voodoo priest, and suspect in multiple murders, was shot and killed in front of a room full of witnesses at the funeral of one of his alleged victims. This debut by Cep is the fascinating account of Maxwell, his lawyer Tom Radney, and Lee's determination to tell their story in a book called The Reverend. However, this is not a work specifically about Lee; the compelling stories of Maxwell and his lawyer comprise nearly half of the text. There are no major secrets revealed here, as Lee's work on the Maxwell story was discussed in Charles Shields's Mockingbird: A Portrait of Harper Lee, and it's still uncertain how much of The Reverend Lee ever wrote. Yet, Cep masterfully builds the suspense throughout this thoroughly researched and enjoyable account. VERDICT Recommended for all who enjoy true crime and legal dramas and essential for those hoping to learn more about Lee's enigmatic life.--Nicholas Graham, Univ. of North Carolina, Chapel Hill

Journalist Cep makes her debut with a brilliant account of Harper Lee's failed attempt to write a true crime book. Part one follows the career of Alabama preacher Willie Maxwell as five family members over several years die under mysterious circumstances, all with large life insurance policies held by the reverend, rumored also to be a voodoo priest. On June 18, 1977, Maxwell was shot dead in front of 300 people at his stepdaughter's funeral in Alexander City, Ala. Part two focuses on his killer's trial later that year, which Harper Lee attended. Along the way, Cep relates the history of courthouses, voodoo, Alabama politics, and everything one needs to know about the insanity defense. Part three charts the To Kill a Mockingbird author's efforts to write about the trial, but in Alexander City she finds only myths, lies, and her own insecurities. By many accounts, Lee wrote a book and may have rewritten it as fiction, though no manuscript has ever been found. As to what happened to the years of work Lee did on the story, Cep notes, "Lee... was so elusive that even her mysteries have mysteries: not only what she wrote, but how; not only when she stopped, but why." Meticulously researched, this is essential reading for anyone interested in Lee and American literary history. Author tour. Agent: Edward Orloff, McCormick Literary. (May) © Copyright PWxyz, LLC. All rights reserved.

Furious Hours comprises three distinct and interrelated stories. The first involves five suspicious deaths and insurance fraud seemingly committed by Willie Maxwell in Alabama in the early 1970s and Maxwell's subsequent murder, in front of a chapel full of witnesses, while at the funeral of his last victim. The second story involves the attorney--Tom Radney--who not only defended and exonerated Maxwell in numerous trials, but also defended his murderer. Cep analyzes Radney within the politics in Alabama during the 1960s and 1970s. The third story, and the real focus of the book, is that of Harper Lee--whom Cep follows from Monroeville, Alabama, to Manhattan--and her struggles to write To Kill a Mockingbird, her work and friendship with Truman Capote, and her retreat from literature. The three stories come together as Lee travels back home to cover the trial of Maxwell's killer in the hope of jump-starting her writing with a book like In Cold Blood, a book she failed to complete. This is a well-written and entertaining read, and Cep does what Lee did not--she writes the story. Summing Up: Recommended. Graduate students and general readers. --Kenneth james Bindas, Kent State University

Harper Lee's crucial work with Truman Capote on In Cold Blood (1966) has been much scrutinized as part of the ongoing mystery regarding her struggle to write after the runaway success of To Kill a Mockingbird (1960), but Cep is the first to reveal in full Lee's efforts to write her own true-crime chronicle, one that, unlike Capote's, would stick to the facts. Lee, who quit law school just weeks before graduation, chose a scandalous case involving the much-feared African American reverend Willie Maxwell, who profited from life-insurance policies on five family members who died under extremely suspicious circumstances; Robert Burns, a relative who shot Maxwell dead at the funeral of his last alleged victim; and attorney Tom Radney, a rare white Alabama liberal who represented Maxwell, then defended his killer. With zeal for research and a gift for linguistic precision, Cep delves into Alabama's history, tells the striking stories of all involved in this macabre saga, and chronicles Lee's extensive investigation, including attending Burns' trial and speaking with Radney and others touched by the killings. Yet Lee could never bring her book to fruition. Cep has vividly and insightfully retrieved a grimly fascinating true-crime story and done Lee justice in a fresh and compelling portrait of this essential American writer.--Donna Seaman Copyright 2019 Booklist

Cep's debut recounts how a series of rural Alabama murders inspired Harper Lee to write again, years after the publication of To Kill a Mockingbird.Death surrounded the Rev. Willie Maxwell. Following his wife's mysterious murder in 1970, four more of Maxwell's family members were inexplicably found dead within seven years. Locals blamed voodoo, but a deeper investigation pointed to fraud: Maxwell, said Lee, "had a profound and abiding belief in insurance," and he collected thousands in death benefits. He was a suspect in his wife's case (charged and curiously acquitted), but years later, before the police could make another arrest, he was killed in a public fit of vigilante justice. In a further twist, the same lawyer who helped clear Maxwell's name decided to represent his killer. Lee, still uncomfortable over the embellishments of her friend Truman Capote's In Cold Blood, wondered "whether she could write the kind of old-fashioned, straitlaced journalism she admired, and whether it could be as successful as the far-bending accounts of her contemporaries." In this effortlessly immersive narrative, Cep engagingly traces how Lee found the case and beganand ultimately abandoneda project she called The Reverend. Cep writes with the accessible erudition of podcast-style journalism; she breathes not only life, but style into her exhaustive, impressively researched narrative. She relies heavily on the backstories of each of her narrative threads, which transforms her book into a collection of connected preambles. Short histories of fraud, Southern politics, and urban development take shape alongside a condensed biography of Lee. This kind of storytelling may feel disjointed, but there's a reason for it: By fully detailing the crimes before Lee even appears, Cep allows readers to see the case through Lee's eyes and recognize its nascent literary potential. Above all, this is a book about inspiration and how a passion for the mysteries of humanity can cause an undeniable creative spark.A well-tempered blend of true crime and literary lore. Copyright Kirkus Reviews, used with permission.
More book reviews at iDreamBooks.com