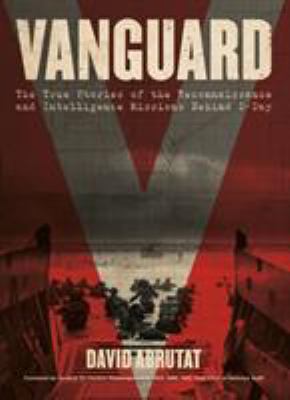 Vanguard : the true stories of the reconnaissance and intelligence missions behind D-Day / David Abrutat ; foreword by Gordon Messenger.

Operation OVERLORD, the opening up of an Allied second front by the invasionof the Normandy beaches in June 1944 was the largest military invasion of all time,but it was preceded by years of industrial scale intelligence collection and dangerousclandestine reconnaissance missions off the French coast.
VANGUARD is the untold story of this work, the intelligence machine and covertreconnaissance missions that went into the D-Day planning, such as the signalsintelligence intercepts, the agent running operations orchestrated by the 15th Flotilla,to the clandestine work of the X-Craft and COPP (Combined Operations PilotageParties) diver teams that scoured the Normandy coast months before the June 1944deadline.
The book pulls together previously unpublished but declassified Top Secretdocuments, diaries, letters and personal accounts from some of the few remainingveterans who were there.