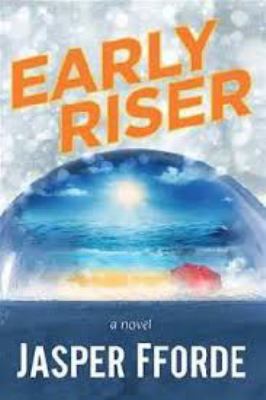 DDC classification: 823/.92 Summary: "Every Winter, the human population hibernates. Charlie Worthing in his first year with the Winter Consuls, a group responsible for ensuring the hibernatory safe passage of the sleeping masses, is investigating an outbreak of viral dreams which are killing people while trying to avoid the Villains, the Nightwalkers, and the WinterVolk in this fantasy suspense thriller"-- Provided by publisher.
Tags from this library: No tags from this library for this title. Log in to add tags.
Total holds: 0

Every winter, the human population hibernates. During those bitterly cold four months, the nation is a snow-draped landscape of desolate loneliness, devoid of human activity. Well . . . not quite.

"Every Winter, the human population hibernates. Charlie Worthing in his first year with the Winter Consuls, a group responsible for ensuring the hibernatory safe passage of the sleeping masses, is investigating an outbreak of viral dreams which are killing people while trying to avoid the Villains, the Nightwalkers, and the WinterVolk in this fantasy suspense thriller"-- Provided by publisher.

Each winter, much of humanity hibernates during the deep cold and snow, relying on the protection of an elite crew known as the Winter Consuls. Some villains prey on the sleeping, such as nightwalkers who eat the living, and the Wintervolk are a lot less mythical than they should be. Many first-time Winter Consul members barely survive the first freeze, much less volunteer to be out in the subzero temperatures. But not Charlie Worthing. When Charlie attempts to deliver a nightwalker to the often dangerous Sector 12, he gets caught both in an investigation of viral dreams that kill people and a conspiracy involving the major corporation HiberTech and splinter group ­RealSleep. Veiled commentary on corporate greed, sleep and dreaming, and twisted popular culture highlight why Fforde, perhaps best known for his "Thursday Next" series, is on par with authors such as Terry Pratchett and Douglas Adams. VERDICT Fforde's masterly, real-world, and socially conscious prose is filled with running jokes, amusing footnotes, and smart wordplay in this stand-alone novel. [See Prepub Alert, 8/27/18.]-Kristi ­Chadwick, Massachusetts Lib. Syst., Northampton © Copyright 2019. Library Journals LLC, a wholly owned subsidiary of Media Source, Inc. No redistribution permitted.

In this richly detailed, dystopic novel from Fforde (the Thursday Next series), most of the population of Wales hibernates in huge Dormitoria through the unbearable Winter. The poor hope not to end up Dead in Sleep, while the elite, benefiting from the designer drug Morphenox, fare better but also risk becoming barely functional nightwalkers, used for manual labor and spare body parts. Charlie Worthing, awake as the newest member of the order-maintaining team of Winter Consuls, is thrown into chasing the mystery of a killer viral dream in opposition to government and business forces alike. The sprightly characters, such as the murderous Villains maintaining the habits of English sophisticates, and the intimately feuding pair of Chief Consul Toccata and Aurora, the head of HiberTech security, bring absurdity into the ambiance, but behave understandably enough to be credible. Charlie's confused but determined mundanity is a relatable anchor in this wild winter world, leavened by Fforde's surrealistic humor. Douglas Adams fans will enjoy the vibe. Author tour. Agent: Will Francis, Janklow & Nesbit U.K. (Feb.) © Copyright PWxyz, LLC. All rights reserved.

Charlie Worthing is a Winter Consul novice, tasked with ensuring the safety of his fellow Welshmen who hibernate through the bitter winter with the help of the wonder drug Morphenox. A routine assignment involving a nightwalker, the essentially dead, zombie-like result of Morphenox gone wrong, takes a strange and deadly turn when he is stranded in Sector 12, aka Douzey, where winter is its most brutal and the inhabitants including the Winter Consul are the most hearty. And foolhardy. As Worthing blindly stumbles equally into lifesaving victory and deadly defeat, he becomes entwined with Aurora, the head of Hiber Tech security, an artist named Brigitta, who may or may not be dead and with whom he may or may not be in love, and dreams of a blue Buick that have driven greater men insane. Readers familiar with Fforde's (The Woman Who Died a Lot, 2012) gleefully pun-heavy world building will relish this stand-alone novel, confident that everything will work out in the end for the underdog. Give it to fans of John Scalzi and Genevieve Cogman's Invisible Library series.--Susan Maguire Copyright 2018 Booklist

Fforde (The Eye of Zoltar, 2014, etc.) returns from his "creative hiatus" with a madcap adventure through the Welsh winter, which has grown so deadly most humans literally sleep through it.Charlie Worthing has just volunteered to join the brave (or, perhaps more accurately, insane) members of the Winter Consul Service, the select group of people who don't hibernate through winter in order to keep the sleepers safe until they wake up in the spring. The sleepers, at least the rich and well-connected ones, are aided by a drug called Morphenox, which sometimes has the unfortunate side effect of turning the sleeper into a nightwalker, which is more or less a zombie that can perform menial tasks (or, in one notable case, play Tom Jones songs on the bouzouki). Constantly warned of the high likelihood of his death by his fellow Winterers, Charlie must quickly learn to navigate the various dangers that come with his new job, such as the probably mythical Wintervolk, like the Gronk, which often leaves victims with strains of Rodgers and Hammerstein tunes running through their heads; roaming groups of faded English aristocrats bent on villainy and kidnapping; strange co-workers he isn't sure he can trust; and a "viral dream" about a blue Buick. Charlie's journey through the especially isolated and dangerous area called Sector Twelve, where there's "always something weird going on," is so absorbing, and Fforde's wit so sharp, the reveal that the narrative is also a commentary on capitalism comes across as a brilliant twist. Fforde writes in the acknowledgments that he hopes to return to a quicker publishing schedule, but this wonderful tale was well worth the wait.Whip-smart, tremendous fun, and an utter delight from start to finish. Copyright Kirkus Reviews, used with permission.
More book reviews at iDreamBooks.com