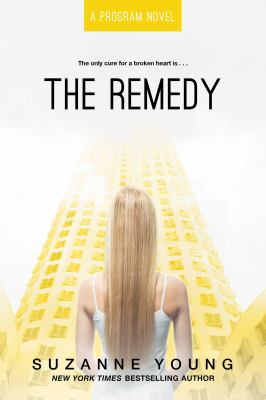 DDC classification: 813.6 Summary: Seventeen-year-old Quinn provides closure to grieving families by taking on the short-term role of a deceased loved one, until huge secrets come to the surface about Quinn's own past.
Tags from this library: No tags from this library for this title. Log in to add tags.
Fiction notes: Click to open in new window

Can one girl take on so many identities without losing her own? Find out in this riveting companion to The Program and the New York Times bestselling The Treatment .

In a world before The Program...

Quinlan McKee is a closer. Since the age of seven, Quinn has held the responsibility of providing closure to grieving families with a special skill--she can "become" anyone.

Recommended by grief counselors, Quinn is hired by families to take on the short-term role of a deceased loved one between the ages of fifteen and twenty. She's not an exact copy, of course, but she wears their clothes and changes her hair, studies them through pictures and videos, and soon, Quinn can act like them, smell like them, and be them for all intents and purposes. But to do her job successfully, she can't get attached.

Now seventeen, Quinn is deft at recreating herself, sometimes confusing her own past with those of the people she's portrayed. When she's given her longest assignment, playing the role of Catalina Barnes, Quinn begins to bond with the deceased girl's boyfriend. But that's only the beginning of the complications, especially when Quinn finds out the truth about Catalina's death. And the epidemic it could start.

Companion book to: The Program and The Treatment.

Seventeen-year-old Quinn provides closure to grieving families by taking on the short-term role of a deceased loved one, until huge secrets come to the surface about Quinn's own past.

Gr 9 Up-In this prequel to The Program (S. & S., 2013), Young tells the story of Quinlan McKee, a closer who helps families grieve the loss of their teenage daughters by temporarily posing as the deceased to provide families with closure. Families pay lots of money to get closers to dress up as their dead children, spend a few last days with them, and say to Quinlan what they wish they could have said to their daughters. Quinlan is one of the best, but being a closer has its drawbacks: she's a social pariah and often feels like she doesn't know who the real Quinlan McKee is. When she's given a long assignment to help the family of Catalina, a young girl who committed suicide, she sparks a forbidden romance with the dead girl's boyfriend and begins to lose sight of reality and forget who she really is. With the help of her ex boyfriend-turned-best friend, Deacon, she's able to snap back to reality with a renewed resolve to uncover the secrets of Catalina's death. This poignant and well-written novel does an exceptional job of providing fans of The Program with a vivid picture of how the suicide epidemic began. The end will leave readers thinking about the mysteries surrounding Quinlan and Catalina long after they've finished, and the loose ends leave the story open to the possibility of a sequel. VERDICT With three-dimensional characters and perfect pacing, this work won't disappoint fans of the first novel.-Candyce Pruitt-Goddard, Hartford Public Library, CT (c) Copyright 2015. Library Journals LLC, a wholly owned subsidiary of Media Source, Inc. No redistribution permitted.

Seventeen-year-old Quinlan McKee has been a closer for 11 years, briefly moving into the lives of families who have a lost a child of her age to provide therapy for those left behind. She impersonates their dead child so the family can experience closure, with one more chance to say all they need to in order to move on. It's emotionally exhausting, but with her boyfriend, Deacon, a closer himself, and her father, a doctor who counsels grieving parents, it's the only life Quinn has ever known. She feels a strong commitment to helping her families, takes pride in her work, and handles the stress fairly well until she receives an assignment whose unusual circumstances hint at some sort of foul play. This companion novel to The Program (2013) and The Treatment (2014) will appeal to the same audience of romance readers and fans of psychological thrillers. There are plenty of plot holes that require suspension of disbelief, but the intriguing premise, swift pace, plentiful chapter hooks, and shocking ending (which demands a sequel) will have readers staying up late to finish it.--Carton, Debbie Copyright 2015 Booklist

Quinlan has always worked for her father's company as a Closer--an actor/counselor who helps grieving families recover from tragic losses by temporarily "becoming" lost loved ones. While on an unusually complicated assignment, Quinn begins to suspect a conspiracy. Set before The Program, this prequel adds layers of intrigue to the series, but it also stands alone as an engaging psychological mystery. (c) Copyright 2015. The Horn Book, Inc., a wholly owned subsidiary of Media Source, Inc. No redistribution permitted.

Quinlan has an uncanny ability to become someone else, especially if that person is dead.Working for an elite government program, Quinlan is a "closer." She enters the lives of the bereaved and temporarily plays the role of the deceased in order to bring closure to the grief-stricken. Having had this job since she was a child, 17-year-old Quinlan is starting to feel hairline fissures in her psyche, finding it increasingly difficult to recall her own personality. Quinlan is driven both by compassion to help the despairing and pressure from her father, who is the head of the grief department. Her latest assignment requires deeper immersion than ever before, and her father is secretive about the details. She becomes Catalina, a beloved daughter who died of mysterious causes. Catalina's boyfriend, Isaac, is included in the assignment, and Quinlan, her own loneliness heightened by his need, finds herself drawn to Isaac's desperation and passion. As the melancholy and eerie story unfolds, Quinlan realizes that no one is telling her the truth, and her life has never been her own. Exploring the topic of memory manipulation as a cure for distress, this stand-alone prequel offers shadowy references to Young's previous novels, The Program (2013) and The Treatment (2014). A visceral exploration of the eternal and misguided search for pain-free happiness in an almost-now Brave New World. (Dystopian romance. 14-18) Copyright Kirkus Reviews, used with permission.
More book reviews at iDreamBooks.com