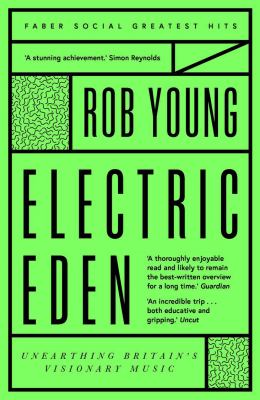 DDC classification: 781.6200941 Summary: In the late 1960s, with popular culture hurtling forward on the sounds of rock music, some brave musicians looked back instead, trying to recover the lost treasures of English roots music and update them for the new age. Young shows, through enchanting storytelling and brilliant commentary, that this revival in England inspired the Beatles and Pink Floyd, Led Zeppelin and Traffic, Kate Bush and Talk Talk.
Tags from this library: No tags from this library for this title. Log in to add tags.

A new edition as part of the Faber Social Greatest Hits - books that have taken writing about music in new and exciting directions for the twenty-first century.

In the late 1960s, with popular culture hurtling forward on the sounds of rock music, some brave musicians looked back instead, trying to recover the lost treasures of English roots music and update them for the new age. Young shows, through enchanting storytelling and brilliant commentary, that this revival in England inspired the Beatles and Pink Floyd, Led Zeppelin and Traffic, Kate Bush and Talk Talk.

While rock 'n' roll and psychedelic rock dominated popular music in the late 1960s, several groups of British musicians were returning to nature in an effort to recover the roots of their culture's music. Young, editor at large of the UK music magazine The Wire, traces the idealistic endeavor that led numerous musicians back to the countryside in search of ballads, ditties, and mythical tales of an earlier Britain uncorrupted by modernity. Along the way, Young chronicles the stories of Fairport Convention, Steeleye Span, Pentangle, Nick Drake, Sandy Denny, and Vashti Bunyan. He introduces Cecil Sharp, who, much like Alan Lomax in the States, traveled around Britain seeking out the tunes and lyrics preserved over centuries by ordinary folk. -VERDICT Young's remarkable (though overly long) book brings to life a mostly forgotten group of musicians who were nevertheless quite influential in the 1960s and 1970s. It stands alone in providing in-depth sketches of seminal bands and, indeed, this entire generation of musicians. A lovely exploration of what has become known as British folk rock. For all libraries.-Henry L. Carrigan Jr., Evanston, IL (c) Copyright 2011. Library Journals LLC, a wholly owned subsidiary of Media Source, Inc. No redistribution permitted.

In this massive, beguiling history of 20th-century British folk music and its legacy, music journalist Young surveys the scene from the Edwardian revival through its postwar coffee-house heyday to contemporary outcroppings. He probes its influences on other genres, from the classical music of Ralph Vaughan Williams to the plangent Renaissance-ish harmonies of Led Zeppelin's "Stairway to Heaven"; the book's headliners are folk-rock luminaries of the '60s and '70s: Fairport Convention, the Incredible String Band, Steeleye Span, and Nick Drake. Young roots his narrative in analyses of folk traditions and the eternal English nostalgia for a mythic rural past, but he also treats the folkie eruption as a very modern reaction to the discontents of industrial society. The folk culture he celebrates is really that of the musicians themselves: their gypsy wanderings, their clubs and festivals and country-house idylls, their debauches and overdoses, their fashion oscillations between hobbit outfits and pagan nudity. American readers' eyes may glaze at the endless litany of groups they have never heard of, but many will be inspired to rediscover these bands by Young's evocations of their music-and the romantic yearnings it expressed. Photos. (May) (c) Copyright PWxyz, LLC. All rights reserved.

*Starred Review* In this fascinating and absorbing examination of Britain's folk music, Young manages the seemingly impossible task of making sense of the various strands of the genre, from Land's End in Cornwall to John o' Groats in Scotland. Young posits that the literature, art, and music of Britain share a common bond, a palpable connection to the landscape that encompasses variou. secret garden. an. paradises lost. The music that he describes here evinces the musicians' desire to return to a bucolic past and reclaim a lost golden age. Consequently, Young finds common ground, too, in numerous non-folk sources, including the poetry of William Blake, the writings of William Morris, the classical music of Ralph Vaughan Williams and Gustav Holst, and the cosmic rock of Marc Bolan of T-Rex. In Young's rich imagination, these artists are all links in the chain of tradition, connected to one another despite their considerable differences. As his discussions range from the singer-songwriter scene in Britain to the folk-based inspiration of early Led Zeppelin, he profiles such seminal figures of the British folk movement as A. L. Lloyd, Cecil Sharp, Ewan MacColl, Fairport Convention, Steeleye Span, Nick Drake, and Richard and Linda Thompson. An exhaustive study and a monumental achievement.--Sawyers, Jun. Copyright 2010 Booklist

A dense, brilliant charting of England's folk-music tradition and its multiplicity of modern mutations.The Wire editor at large Young brings considerable acumen to bear in this ambitious critical history. Beginning with cult siren Vashti Bunyan's quixotic 1971 journey across the countryside in a horse-drawn wagon, the writer explores a "silver chain" of impulsespastoral, utopian, paganrunning through the indigenous music of the British Isles. Beginning in the late 19th century at the doorstep of writer-artist William Morris, the author probes the pioneering work of such song collectors as Ralph Vaughan Williams and Cecil Sharp. Moving into the age of recorded music, he celebrates key figures in the 1950s folk boom like A.L. Lloyd and Ewan MacColl. The meat of the narrative takes in the '60s, when England's folk clubs spawned seminal performers like guitarist Davy Graham, vocalist Shirley Collins and family harmony group The Watersons, who in turn inspired the great folk-rock acts of the era. Young focuses on the major namesFairport Convention, Pentangle, the Incredible String Band, Nick Drake, John Martyn, Steeleye Spanbut he doesn't ignore dozens of lesser-known performers in tune with the Arcadian muse. After a look at the waning of folk-rock, which coincided with the late-'70s ascent of Thatcherism, Young surveys the works of such latter-day inheritors as Kate Bush, David Sylvian, Julian Cope and Mark Hollis' Talk Talk. It's impossible to completely convey the sweep and detail of the author's work, which reflects a deep knowledge of congruent works in English literature, film and visual arts. He logs the connections between the folk boom and parallel developments in Early Music and world music, and doesn't ignore its tangential connections with genres like heavy metal. He ties the movement to the English landscape itself in a compelling chapter on festivals that culminates in Glastonbury's 1971 debut. While the book is massive, it never bogs down in pedantry, and Young's lyrical, good-humored, bracingly intelligent narrative voice keeps the story moving at a brisk pace.A breathtakingly accomplished, entertaining and illuminating epic.]] Copyright Kirkus Reviews, used with permission.
More book reviews at iDreamBooks.com