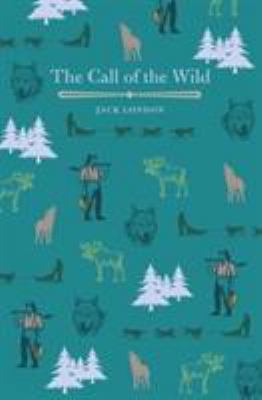 The call of the wild / Jack London.

DDC classification: 813.52 Summary: "Adventure! Drama! Danger! Loyalty! This work tells the tale of a dog's fight for survival in the harsh and frozen Yukon. Born into luxury but sold as a sledge dog, he rises above all his enemies to become one of the most feared and admired dogs in the north. Oxford Children's Classics present not only the original and unabridged story of The Call of the Wild but also help you to discover a whole world of new adventures with an amazing assortment of recommendations and activities." -- Publisher description.
Tags from this library: No tags from this library for this title. Log in to add tags.

"Adventure! Drama! Danger! Loyalty! This work tells the tale of a dog's fight for survival in the harsh and frozen Yukon. Born into luxury but sold as a sledge dog, he rises above all his enemies to become one of the most feared and admired dogs in the north. Oxford Children's Classics present not only the original and unabridged story of The Call of the Wild but also help you to discover a whole world of new adventures with an amazing assortment of recommendations and activities." -- Publisher description.

London's classic tale of survival, about a gentle California dog's gradual transformation into a fierce arctic predator, calls for a robust, masculine reading. Because it is told from the dog's point of view, it also demands a narrator who can communicate the nuances of both animal and human emotion. Actor/narrator William Roberts's (The Fall of the House of Usher) performance amply meets those standards and ranks with the late Frank Muller's reading of this title for Recorded Books as among the best around. Highly recommended. [Audio clip available through www.naxosaudiobooks.com; an alternate abridged edition, read by Garrick Hagon, is also available from Naxos AudioBooks.-Ed.]-R. Kent Rasmussen, Thousand Oaks, CA (c) Copyright 2010. Library Journals LLC, a wholly owned subsidiary of Media Source, Inc. No redistribution permitted.

Years ago, Classic Comics, heavily digested versions of classic novels, functioned as illustrated Cliff's Notes for students. Kleid (Ninety Candles, Brownsville) and Nino (Graphic Classics: The Invisible Man) have updated the old form with this adaptation of Jack London's perennial. Kleid's adaptation competently summarizes the original, introducing the reader to Buck the dog, the vile man in the red sweater and the sympathetic John Thornton, highlighting the main events from the novel and using London's most workmanlike sentences to keep the story moving along. Nino's black-and-white art has a nice kinetic, almost impressionistic quality. Unfortunately, his emphasis on movement over clarity makes it difficult to tell human beings from each other, let alone dogs, and obscures any real emotion. Kleid himself sums up the biggest problem with this adaptation in his afterword: "London was smart-he went the novel route, where it's easier to get inside a dog's head." The audience for this adaptation is blurred: older readers may just read the original, while younger readers are unlikely to understand either the art or Kleid's self-indulgent afterword, which tries to compare the adaptation to Grant Morrison and Frank Quitely's groundbreaking (but arguably unsuitable for children) We3. (Mar.) (c) Copyright PWxyz, LLC. All rights reserved

Gr 7 Up-In this new audiobook edition, London's classic adventure story (originally pubished in 1903) presents a vivid exploration of a world that will not be too familiar to the average young reader. The plot revolves around Buck, a St. Bernard-Scotch Collie mix, who was the personal pet of Judge Miller in California's Santa Clara Valley. While strolling around the ranch as he was wont to do, Buck is taken by Manuel, the judge's gardener, and then sold to pay off some of Manuel's gambling debts. Crated and shipped off to Seattle, Buck's life is forever changed, as he finds himself in the hands of French-Canadians who take him, along with several other dogs, to the Klondike. There he is trained to be a sled dog, and Buck quickly learns the meaning of survival of the fittest. A fierce rivalry develops between Buck and the lead dog, Spitz, and, eventually, it is a fight to the death. Matthew Steward does an excellent job of bringing the bitterly cold and brutal world of Buck and the other sled dogs to life. Steward's enactment of the various human characters, their abuse and ruthless treatment of the dogs, will keep listeners captivated to the very end. Whether or not listeners are familiar with London's original, this audiobook will undoubtedly bring a better understanding of what it takes to live in a world that is wild and threatening, and through London's use of human emotions and traits that Buck reveals in this bitter, cold, wild adventure, it is one not easily forgotten.-Sheila Acosta, Cody Library, San Antonio, TX (c) Copyright 2014. Library Journals LLC, a wholly owned subsidiary of Media Source, Inc. No redistribution permitted.

Gr. 6-9. Jack London's unparalleled tale of ferocious dignity and love joins the Puffin Graphics series, which already includes such classics as Macbeth, Dracula, and Black Beauty. Buck, complacent in his comfortable home, is dognapped and sold into servitude. Amid the frigid landscape of the Yukon during the gold rush, the sled dog's life of struggle remolds Buck into a fierce leader and a loyal companion. Kleid\b wisely omits extraneous details but preserves much of London's language and sweep, boiling the story down to archetypal purity. Unfortunately, although Nino's figures are emotive and the dual-tone backgrounds are appropriately stark, setting predominantly white panels against a white page encourages the eye to pass too easily over the images, breaking down the essential union of words and pictures. But the story can't be beat, and functioning on the strength of its action-packed narrative, this version will prove an exciting way into a classic for many reluctant readers. --Jesse Karp Copyright 2006 Booklist

London's classic novel of a stolen dog learning to survive in the Yukon is presented with its text unabridged and accompanied by engravings that evoke the snow and cold of northern Canada. In a foreword, Jean Craighead George describes how her childhood appreciation for London's novel led her to travel to the Arctic and write [cf2]Julie of the Wolves[cf1]. From HORN BOOK Spring 2003, (c) Copyright 2010. The Horn Book, Inc., a wholly owned subsidiary of Media Source, Inc. No redistribution permitted.
More book reviews at iDreamBooks.com