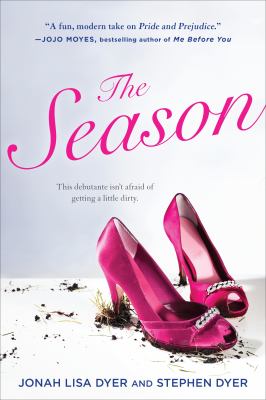 DDC classification: [Fic] Summary: Follows the experiences of Olympic hopeful Megan, who, after being entered against her will in the Dallas debutante season, falls unexpectedly in love and is targeted by a poisonous drama queen.Other editions: Reproduction of (manifestation):: Dyer, Jonah Lisa. Season.
Tags from this library: No tags from this library for this title. Log in to add tags.

Megan McKnight is a soccer star with Olympic dreams, a history major, an expert at the three Rs of Texas (readin', ridin', and ropin'), and she's not a girly girl. So when her Southern belle mother secretly enters her as a debutante for the year's deb season in their hometown of Dallas, she's furious-and has no idea what she's in for.

Megan's attitude gets her on probation with the mother hen of the debs, and she has only a month to prove she can ballroom dance, display impeccable manners, and curtsey like a proper Texas lady or she'll get the boot and disgrace her family. The perk of being a debutante, of course, is going to parties, and it's at one of these lavish affairs where Megan gets swept off her feet by the debonair and down-to-earth Hank Waterhouse. If only she didn't have to contend with a backstabbing blonde and her handsome but surly billionaire boyfriend.

Will Megan be able to juggle her soccer dreams and Texas society? Because the season has just begun, and the drama is just getting started.

Praise for The Season -

Follows the experiences of Olympic hopeful Megan, who, after being entered against her will in the Dallas debutante season, falls unexpectedly in love and is targeted by a poisonous drama queen.

In this contemporary retelling of Pride and Prejudice, Megan McKnight (standing in for Elizabeth Bennet) is a college soccer star and tomboy whose mother demands she go through the prestigious Dallas debutante season with her twin sister, Julia, representing Jane. Megan and Julia are debutante royalty-all of the women in their family have been debs-and live on a struggling cattle ranch, which their mother hopes to sell to solve their financial woes. The Dyers, a married screenwriting team, send the twins to party after lavish party, with suitors swirling around them, including two for Megan (Hank, in place of Mr. Wickham, and Andrew, a Darcy figure). The authors paint Megan in broad strokes, portraying her as the unlikeliest of debs and playing up the physical comedy (Megan goes to her first event of the season with a wicked black eye) before giving her a dramatic transformation from clumsy tomboy to polished-but not too polished-debutante. Austen fans will enjoy recognizing classic Pride and Prejudice moments and appreciate the message about staying true to oneself. Ages 14-up. Agent: Simon Lipskar, Writers House. (July) © Copyright PWxyz, LLC. All rights reserved.

Gr 9 Up-Megan McKnight's got her eye on the Olympics. She's more comfortable on a soccer field than executing a "Texas Dip" for the Dallas elite as a Bluebonnet debutante. But with her family's ranch in jeopardy and her parents' marriage in similar straits, Megan reluctantly agrees to debut with her twin sister, Julia. What follows is a Southern-flavored Pride and Prejudice, with the Texas upper crust and one Manhattan socialite substituting for the English gentry. Plenty of familiar characters and plot points abound. The strongest literary revamp is Hank, the charming but ultimately caddish manipulator, and, of course, Megan, who jumps off the page, sticking to her guns when it's important while also evolving. Sadly, Andrew (the Darcy) is close but not quite a match for the heroine. With extravagant parties, a car chase, family scandal, and even a brawl, the Dyers keep things interesting. Megan learns what she's capable of (for good or ill) and what it means to misjudge others. Occasional swearing and sexual situations happen off-page. The dialogue ranges from wonderfully cheeky to occasionally overdramatic, with a few forced lines from the source material peppered throughout. VERDICT This tale covers no new territory and yet is a thoroughly enjoyable read, especially for fans of Austen retellings.-Danielle Serra, Cliffside Park Public Library, NJ © Copyright 2016. Library Journals LLC, a wholly owned subsidiary of Media Source, Inc. No redistribution permitted.

A junior at S.M.U., Megan is a Division I soccer player with World Cup dreams. Shocked when she learns of her selection as a Dallas debutante, she is furious with her mother, who arranged it. Unwanted shopping sprees and remedial Etiquette and Deportment classes are followed by lavish themed parties and arranged escorts with eligible young men. Not even her personal stylist can conceal Megan's soccer-related black eye before her first formal event two hours after the game. Still, playing along with the show dog debutante process for family reasons, she becomes increasingly involved and is ultimately changed by the experience. Throughout the novel, the Dyers weave elements of characters, scenes, and dialogue from Pride and Prejudice, including an enigmatic, Darcy-like love interest and a conniving, Wickham-like cad. While the amusing scene in which an embarrassed Megan makes her first condom purchase may have no nineteenth-century equivalent, elements such as misjudging people, dealing with social disasters, and falling in love are common to both eras. A wryly amusing first-person narrative.--Phelan, Carolyn Copyright 2016 Booklist

College athlete Megan dreams of playing Olympic soccer, not being a stupid Texas Bluebonnet debutante with her twin, Julia. But it means so much to their mother, and it might even save her parents' marriage--if she isn't thrown out. As Megan navigates millionaires' parties and crams into gowns and torturous underwear, she finds love and her own definition of poise in this breezy comedy. (c) Copyright 2017. The Horn Book, Inc., a wholly owned subsidiary of Media Source, Inc. No redistribution permitted.

College soccer defines 20-year-old Megan's life, until her mom forces her to participate in an exclusive debutante season.Megan immediately makes the debutantes' pedigrees clear, noting that, "even in 2016 a Bluebonnet debut in Dallas still meant white girls of privilege and wealth." And while her family's cattle ranch is bleeding money, Megan's trust fund ensures that she's largely able to keep up with the ridiculous expenditures on stylists, custom designer attire, and lavish parties. Megan's rough edges (such as her inability to flirt) are eventually smoothed as she learns the importance of becoming socially acceptable through the use of plastic "chicken cutlet things" to increase her bust size and shapewear to alter her silhouette and by learning to properly serve tea. As in any good ugly-duckling metamorphosis story, brash Megan manages to catch the eye of just the right man. Unfortunately, as the romance plotline plays out, any notions of female empowerment that Megan's transformation supposedly represents are thoroughly undermined. The novel does introduce real issues of domestic violence and sexual abuse but then largely marginalizes them in favor of focusing on the challenges of being a rich debutante.Ultimately, though a season undoubtedly presents conflicts for its participants, Megan's are unlikely to resonate with most modern readers. (Fiction. 14-18) Copyright Kirkus Reviews, used with permission.
More book reviews at iDreamBooks.com