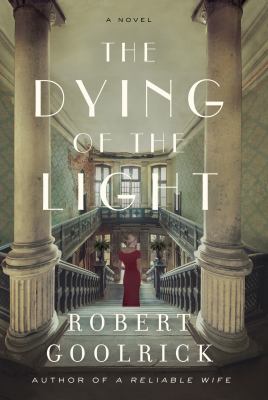 The dying of the light : a novel / Robert Goolrick.

DDC classification: 813/.6 Summary: Diana Cook, born at the turn of the nineteenth century, the only daughter of Virginia gentry, agrees to marry a rich captain to save her family's land. Luckily for Diana, her union with the captain is brief and gives her a beautiful son. But after the son is grown is when the real tragedy begins.
Tags from this library: No tags from this library for this title. Log in to add tags.
Total holds: 0

<p>From the author of the bestselling A Reliable Wife comes a dramatic, passionate tale of a glamorous Southern debutante who marries for money and ultimately suffers for love--a southern gothic as written by Dominick Dunne.</p> <p>It begins with a house and ends in ashes . . .</p> <p>Diana Cooke was "born with the century" and came of age just after World War I. The daughter of Virginia gentry, she knew early that her parents had only one asset, besides her famous beauty: their stately house, Saratoga, the largest in the commonwealth, which has hosted the crème of society and Hollywood royalty. Though they are land-rich, the Cookes do not have the means to sustain the estate. Without a wealthy husband, Diana will lose the mansion that has been the heart and soul of her family for five generations.</p> <p>The mysterious Captain Copperton is an outsider with no bloodline but plenty of cash. Seeing the ravishing nineteen-year-old Diana for the first time, he's determined to have her. Diana knows that marrying him would make the Cookes solvent and ensure that Saratoga will always be theirs. Yet Copperton is cruel as well as vulgar; while she admires his money, she cannot abide him. Carrying the weight of Saratoga and generations of Cookes on her shoulders, she ultimately succumbs to duty, sacrificing everything, including love.</p> <p>Luckily for Diana, fate intervenes. Her union with Copperton is brief and gives her a son she adores. But when her handsome, charming Ashton, now grown, returns to Saratoga with his college roommate, the real scandal and tragedy begins.</p> <p>Reveling in the secrets, mores, and society of twentieth-century genteel Southern life, The Dying of the Light is a romance, a melodrama, and a cautionary tale told with the grandeur and sweep of an epic Hollywood classic.</p>

Diana Cook, born at the turn of the nineteenth century, the only daughter of Virginia gentry, agrees to marry a rich captain to save her family's land. Luckily for Diana, her union with the captain is brief and gives her a beautiful son. But after the son is grown is when the real tragedy begins.

Diana Cooke is no mere beauty: she is adventurous, smart, and, sadly, needs to save her family home, Saratoga, in Virginia. Once a gem of Southern society, the mansion, along with the Cookes, has fallen on hard times after World War I. On making her debut into society, Diana catches the eye of Captain Copperton, an obscenely rich man. After an exciting start, the marriage rapidly becomes miserable. When Copperton dies in an accident, his will deals Diana the unkindest cut: their son, Ashton, is sent to boarding school. The story then jumps ahead nine years as Ashton and his college roommate Gibby visit Saratoga, setting in motion a series of events with tragic consequences. While Goolrick (A Reliable Wife) was aiming for Southern gothic, the novel's tone ends up being more overwrought than atmospheric.The framing device of a reporter looking to uncover the truth behind the fire that destroyed Saratoga adds a curious distance to the overall narration. More problematic is the way the author writes his black and female characters. The ease in which he pardons Copperton for continued marital rapes of Diana aligns with his chauvinistic descriptions of her and other female personae. Verdict Buy only where the author's previous books were popular. [See Prepub Alert, 1/29/18.]-Lynnanne Pearson, Skokie P.L., IL © Copyright 2018. Library Journals LLC, a wholly owned subsidiary of Media Source, Inc. No redistribution permitted.

Goolrick (A Reliable Wife) tells the intriguing and heartbreaking story of American debutante Diana Cooke, whose difficult adult life culminated in her disappearance after her family's estate, Saratoga, burned to the ground. Diana, a beautiful, tomboyish girl, had caring parents who doted on her, and also reinforced the notion that if Diana didn't marry someone wealthy, they could lose Saratoga. Diana, just coming into her twenties, meets Captain Copperton, an older gentleman of new money, and the two quickly marry. Known as a charmer, the captain turns out to be a cruel husband. Together, Diana and Copperton have a son, Ashton, who proves to be Diana's only solace. But after Copperton dies in a horse race, Ashton is sent away, and Diana is left alone with Saratoga, barely able to make ends meet as his fortune is in limbo. Eventually, a grown Ashton returns and begins to set Saratoga on the right course once again, until his devotion to his mother is challenged when she begins a love affair with his closest friend, Gibby. In the end, everyone must overcome their own prejudices to forge a way forward. Filled with glamour and devastating family scheming, this American tragedy swathed in honor, money, and betrayal will please fans of dramatic, sweeping historicals. (July) © Copyright PWxyz, LLC. All rights reserved.

Stunning southern belle Diana Cooke devotes her life to preserving her family's magnificent estate, losing almost everything else in the process. With the family fortune waning at the dawn of the twentieth century, rather than relinquishing Saratoga, their generational mansion, the Cookes offer up Diana like a lamb to slaughter, and she willingly does her duty, marrying gauche millionaire Captain Cooperton. Though Saratoga is now protected, Diana is trapped in a loveless and unexpectedly brutal marriage. Despite the abuse she suffers, she feels blessed by the birth of her son, Ashton, a seemingly golden child who harbors his own dark secrets. Fast-forward two decades, when Ashton returns from school with his roommate and best friend, the charming Gibby Cavenaugh. While Ashton feverishly attempts to restore the ancestral home, Diana and Gibby, irresistibly drawn to one another, indulge their mutually smoldering passions. As in all southern gothics, tragedy and doom lurk around every bend and twist of Goolrick's (The Fall of Princes, 2015) melodramatic tale.--Flanagan, Margaret Copyright 2010 Booklist

A blue-blooded Southern belle's grandiose life is upended by the desire that consumes her.Goolrick (The Fall of Princes, 2015, etc.) returns to the gothic influences that marked his first two novels, heightened here by an operatic arc that doesn't quite ring true. A modern-day prologue finds a young reporter sifting through the ashes of Saratoga, an enormous Virginia mansion that burned to the ground in 1941, taking lives with it. The novel itself is the story of Diana Cooke, who in 1919 is the debutante of the year, destined for high society. On Diana's burdened shoulders lies the responsibility of saving Saratoga, her family's home, by marrying Capt. Copperton, a vulgar and violent man who fathers Diana's one saving grace, a son named Ashton. After Copperton dies in an accident, Diana retreats to the lonely halls of Saratoga. Her life becomes infinitely more complicated when Ashton returns from college with his handsome roommate, Gibby Cavenaugh, in tow. Ashton commits himself to fixing up Saratoga, bringing in an eccentric librarian, Lucius Walter, and a high-spirited decorator, Rose de Lisle. Gibby, meanwhile, commits himself to fulfilling the pent-up desires of the not-so-modest Diana Cooke Copperton. As they say, drama ensues. There is an accident. A suicide. A fistfight and a near drowning. "Secrets revealed about the true state of things," writes Goolrick. "An accounting. Cards shown." Through it all develops the complex, unconventional triangle between Diana and "the single godlike creature her two men had become in her misted eyes." Goolrick's writing is always lyrical, and even simple lines like "They tried so hard it broke their hearts," or "Love, for him, was archeological, a dig for a treasure he would never find," are bitterly poetic. Yet stripped to its core, the story is soapy, over-the-top, and plunging toward an inevitable finale.A lurid and ultimately tragic tale revolving around a woman willing to burn her life to the ground. Copyright Kirkus Reviews, used with permission.
More book reviews at iDreamBooks.com