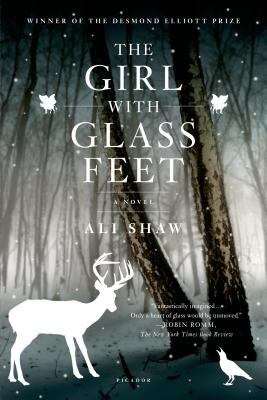 The girl with glass feet : a novel / Ali Shaw.

Genre/Form: Fantasy fiction. | Romance fiction.DDC classification: 823/.92 Summary: "Strange things are happening on the remote and snowbound archipelago of St Hauda's Land. Unusual winged creatures flit around icy bogland; albino animals hide themselves in the snow-glazed woods; jellyfish glow in the ocean's depths - and Ida MacLaird is slowly turning into glass from the feet up."-- Back cover.
Tags from this library: No tags from this library for this title. Log in to add tags.

WINNER OF THE DESMOND ELLIOTT PRIZE

Strange things are happening on the remote and snowbound archipelago of St. Hauda's Land. Magical winged creatures flit around the icy bogland, albino animals hide themselves in the snow-glazed woods, and Ida Maclaird is slowly turning into glass. Ida is an outsider in these parts who has only visited the islands once before. Yet during that one fateful visit the glass transformation began to take hold, and now she has returned in search of a cure.

The Girl with Glass Feet is a love story to treasure, "crafted with elegance and swept by passionate magic and the yearning for connection. A rare pleasure" (Katherine Dunn, author of Geek Love ).

"Strange things are happening on the remote and snowbound archipelago of St Hauda's Land. Unusual winged creatures flit around icy bogland; albino animals hide themselves in the snow-glazed woods; jellyfish glow in the ocean's depths - and Ida MacLaird is slowly turning into glass from the feet up."-- Back cover.

Ida Maclaird is turning to glass from her feet up, one painful shard at a time. She has returned to St. Hauda's Land, a remote group of islands that hosts such oddities as tiny moth/cow hybrids, searching for answers. There she meets the reclusive Midas Crook, who prefers to experience life through his camera lens. As Ida becomes more enmeshed in Midas's life, we learn that the cold and desolate landscape has long been host to failed love affairs and tragic lives. Can Ida be saved? Or any of the other dismal characters? This debut from former bookseller and Bodleian Library worker Shaw features some inspired prose and haunting imagery. Still, the bleak tone and unrelenting tales of woe will weigh heavily on most readers, though those with a neo-gothic bent or a fondness for the darker offerings of authors like Charles de Lint and John Crowley may be drawn to Shaw's work. Verdict Optional reading as we wait to see if any buzz follows this one over the Atlantic (it's been long-listed for the 2009 Guardian First Book Award). [See Prepub Alert, LJ 9/15/09.]-Jenn B. Stidham, Houston Community Coll.-Northeast (c) Copyright 2010. Library Journals LLC, a wholly owned subsidiary of Media Source, Inc. No redistribution permitted.

The cold northern islands of St. Hauda's Land are home to strange creatures and intertwining human secrets in Shaw's earnest, magic-tinged debut. Ida Maclaird returns to the archipelago to find a cure for the condition her last visit brought her-she is slowly turning into glass. The landscape is at once beautiful and ominous, and its residents mistrustful, but she grows close to Midas Crook, a young man who, despite his intention to spend his life alone, falls in love with Ida and becomes desperate to save her. Their quest leads them to Henry Fuwa, a hermit biologist devoted to preserving the moth-winged bull, a species of insect-sized winged bovines; to Carl Mausen, a friend of Ida's family whose devotion to her mother makes him both ally and enemy; and finally to Emiliana Stallows, who claims to have once cured a girl with Ida's affliction. Each of these characters' histories intertwine, though their motivations surrounding Ida are muddled by their loyalties. Both love story and dirge, Shaw's novel flows gracefully and is wonderfully dreamlike, with the danger of the islands matched by the characters' dark pasts. (Jan.) (c) Copyright PWxyz, LLC. All rights reserved

Combining magic realism, the conventions of a romance novel, and a British sense of practicality, this charming first novel creates a new fable. After visiting a family friend on a remote island, Ida Maclaird finds herself strangely and literally turning to glass. When she returns to try and find the mysterious scientist who may have an answer, she stumbles on old love triangles and Midas, a lonely young man trying to find a way to heal his own mysterious pains. As Ida and Midas try to unravel mysteries from the past generations, they also try to unravel the mystery of Ida's affliction and slowly find a connection to each other.--Block, Marta Segal Copyright 2009 Booklist

Emotional entanglements on a faraway frozen island are shaped by romance and tragedy in a melancholic yet whimsical British debut. Albino crows, ice, gray vistas and an animal that can turn living things white all accentuate the monochrome palette Shaw uses to paint his imaginary landscape, the snowy archipelago of St. Hauda's Land, and to characterize the people who live therefragile, isolated or abandoned. Ida Maclaird, slowly turning to glass from the feet up, has returned to St. Hauda's to find Henry Fuwa, a scientist she believes can help with her strange condition. While on the island, she's living in the cottage of Carl Maulsen, who loved but lost Ida's mother. A clandestine love affair also shadowed the parents of Midas Crook, whose mother was Henry's lover. Shy, inexperienced Midas is trying to live a life completely unlike that of his suicidal father, and when he meets Ida he slowly opens up to his feelings for her. Together they visit Henry, whose weird science includes a less-than-encouraging evaluation of Ida's ailment: It's both fast-moving and incurable. Although kept apart by Carl and various plot delays, Ida and Midas eventually become lovers, but little time remains, and both must confront their deepest fears as Shaw winds his tale toward a magical final scene and a more prosaic epilogue. At its best, this strikingly visual novel shrugs off self-consciousness and a sense of strain to become captivatingly ethereal. Copyright Kirkus Reviews, used with permission.
More book reviews at iDreamBooks.com