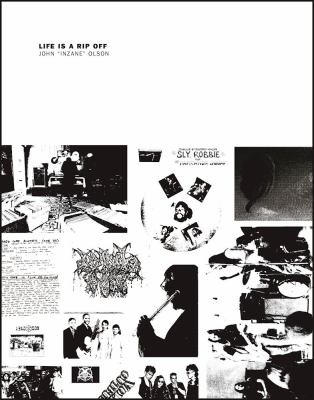 Life is a rip off / John "Inzane" Olson.

LIFE IS A RIP OFF: THE COMPLETE BOOK is 404 pages and 12 months of record reviews--one record a day, every day, for one year. Yes, John "Inzane" Olson aka Inzane Johnny of Wolf Eyes aka American Tapes did that. And he reviewed everything from death metal demo cassettes to the Staples Singers' gospel. Enter into the OLZONE and find out about music you've never known, bands from places that you've never heard, and then read his review of classic rock cornerstones such as KANSAS. Reading LRIP will make you re-realize why blues is relevant, why every punk band in America matters, why jazz is good for the heart, and metal will always ride by your side.

"To write music op-ed this good, you have to tap the primordial sap sack, to butterfly stroke the ancient ooze of tune begatment, cave dwell with the knuckle draggers, scratch symbols into the dirt with the freaks and make it rain. He do and it did."--Henry Rollins

"[Life is a Rip Off] is the best way [John Olson] can add another cubist layer to the sound and visuality he's already presented for the last twenty or so years. He's sharing something the people who don't know him personally don't get enough of--his textual, syntactical brain, stained as it is with dollar-store spray paint."-- Ben Hell Hall, Detroit artist.

"When John agreed to write a record review a day, back in 20xx, I wasn't too keen on the idea. Not because I didn't think he could do it - but that I knew he would do it, even if it became a years-long all-encompassing obsessive task."--Tovah Olson, The Dead Machines.

"A record a day. A year in review"--Back cover.