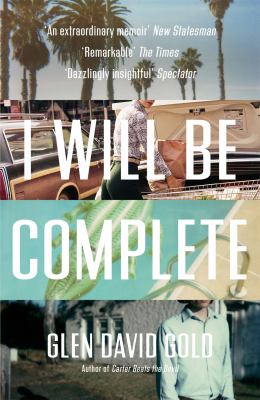 I will be complete : a memoir / Glen David Gold.

Genre/Form: Autobiographies.DDC classification: 813.6 Summary: From the bestselling author of Carter Beats the Devil and Sunnyside, a shocking, big-hearted memoir about his bizarre upbringing in California in the 1970s and how he survived it.
Tags from this library: No tags from this library for this title. Log in to add tags.

From the bestselling author of Carter Beats the Devil and Sunnyside , a shocking, big-hearted memoir about his bizarre upbringing in California in the 1970s and how he survived it.

Glen David Gold grew up rich on the beaches of 1970s California, until his father lost a fortune and his parents divorced when he was ten.

Glen and his English mother moved to San Francisco, where she was fleeced by a series of charming con men and turned increasingly wayward. When he was twelve, she took off for New York without telling him, leaving him to fend for himself. On midnight streets and at drug-fuelled parties, wise-cracking his way through an alarming adult world, Glen watched his mother's countless, wild attempts to reinvent herself.

In this exceptional memoir, acclaimed novelist Glen David Gold captures his bizarre, lonely upbringing and how it shaped him as an adult with stunning insight and unsparing candour. Shocking, mordantly funny and achingly affecting, he tells an unforgettable story of the years he spent trying to rescue his mother - and his ultimate realisation that only by breaking free could he ever hope to be complete.

'The prose is crystalline, hard as real diamonds, flashing, revealing. The story is simple, just a boy and his mother's long disintegration, but the journey is darkly complicated, heartbreaking, beautiful as hell.' Mark Childress, author of Crazy in Alabama

From the bestselling author of Carter Beats the Devil and Sunnyside, a shocking, big-hearted memoir about his bizarre upbringing in California in the 1970s and how he survived it.

When Gold was just 12 years old, his mother left him alone in their San Francisco apartment while she took a spur-of-the-moment trip to New York with a new fling. Days later, his mother called and said he would be fine, to think of it as an adventure. As Gold outlines in this searching memoir, the emotional bruises of his unstable childhood would last as he began started to make his own way in the world and began a career as a writer. Following the chaos of his formative years, Gold developed a detachment from emotion that he once regarded as a superpower but later recognized as depression. He skilfully describes this process, from his early years living in a house that served as a showy monument to his father's fly-by-night wealth, through his six years going to college and working in bookstores, and his early struggles with relationships and his career. Years later, his mother would deny the New York getaway ever happened. But, in his memoir, Gold powerfully reclaims his own story.--Bridget Thoreson Copyright 2018 Booklist

A novelist and short story writer takes a stab at memoir."For years I didn't write this memoir because I wasn't sure of myself," writes Gold (Sunnyside, 2009, etc.) near the end. "I was waiting for a specific perception to cascade down and surround and I was hoping it would feel like radiance. Oh now I understand why my mother did that. I was waiting for the moment I would be a slightly better person." These perceptionsthe author's clear desire for insightful retrospectionfollow Gold throughout the book. He writes searchingly about the tenuous relationship with his mother that he fostered, watched decay, and eventually restored. Systematically, it seems, she loved and demoralized him at the same time. "I loved my father but I belonged to my mother," writes the author. This feeling of belonging and ownership would eventually come to define him. As he navigated through the hardships of social acclimation at Wesleyan University, in the workforce, and in his romantic life, Gold was constantly seeking a comfortable place in a world constantly in flux. But this struggle made him particularly insightful, and he offers consistently interesting takes on a variety of topics, specifically childhood and the process of maturation: "I was an anxious kid. I was born with a job. My parents told me they wanted to be parents so they could avoid the mistakes their own parents had made. I think they said this to let me know I was loved, but it made me feel pressure. I was going to have a better childhood. I wasn't sure what that entailed, but it suggested responsibilities." Gold delivers an engaging work of nonfiction that shows the author in a continuous battle to reconcile axioms with personal truths. As readers accompany him through his tumultuous relationships, unsuccessful jobs, or awkward interactions with his father, most will enjoy the ride.A strong memoir that oozes with the excitement of a life well-livedand well-analyzed. Copyright Kirkus Reviews, used with permission.
More book reviews at iDreamBooks.com