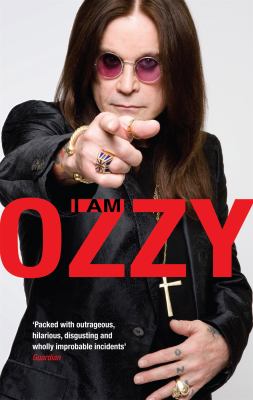 I am Ozzy / Ozzy Osbourne with Chris Ayres.

Genre/Form: Biographies.DDC classification: 782.42166092 Summary: Born into a life so poor that the whole family slept in one room, Ozzy endured a tough upbringing. Music was his salvation and his band Black Sabbath went on to change the music scene forever.
Tags from this library: No tags from this library for this title. Log in to add tags.
Fiction notes: Click to open in new window
No physical items for this record

People ask me how come I'm still alive, and I don't know what to say. When I was growing up, if you'd have put me up against a wall with the other kids from my street and asked me which one of us was gonna make it to the age of sixty, with five kids and four grandkids and houses in Buckinghamshire and California, I wouldn't have put money on me, no f**king way. But here I am: ready to tell my story, in my own words, for the first time.

A lot of it ain't gonna be pretty. I've done some bad things in my time. But I ain't the devil. I'm just John Osbourne: a working class kid from Aston, who quit his job in the factory and went looking for a good time.

Born into a life so poor that the whole family slept in one room, Ozzy endured a tough upbringing. Music was his salvation and his band Black Sabbath went on to change the music scene forever.

Osbourne, lead singer for the legendary band Black Sabbath, popular rock solo artist, husband to Sharon, and recent TV personality, is lucky to be alive. His autobiography describes the excesses of his rock 'n' roll lifestyle-every bottle, needle, pill, girl, and gun. Holding back nothing, this is horrific, fascinating, and often hilarious. Case-in-point: He asked Betty Ford where the bar was while checking into rehab for the first time. Ayers (Death By Leisure: A Cautionary Tale) does a great job of getting out of the way because his contribution is seamless; the voice here is pure Ozzy. Readers get behind-the-scenes stories of all of the numerous, infamous incidents of his life, including rumors of Satanism, biting the heads off of bats and doves, the bizarre death of guitarist Randy Rhoades, his courtship of the now-famous Sharon Osbourne, and his constant and endless battles with alcohol, drugs, and lawyers. Verdict Fans of Osbourne and his family and readers of rock 'n' roll biographies must read this. One of the most amazing rock autobiographies of all time; highly recommended.-Todd Spires, Bradley Univ. Lib., Peoria, IL (c) Copyright 2010. Library Journals LLC, a wholly owned subsidiary of Media Source, Inc. No redistribution permitted.

Frank Skinner delivers a perfect performance of Osbourne's memoir of his long and colorful career-from his humble beginnings to his days fronting Black Sabbath and rise as a successful solo artist. Skinner captures Osbourne's slurry drawl in an intimate performance that transports the listener to a quiet pub where Ozzy is holding court and swapping stories about family, factory jobs, stints in prison, drugs, sex, alcohol, guns, chickens, more drugs, band breakups. Equally compelling are Skinner's renditions of Osbourne's friends and bandmates-his Geezer Butler is a knockout. A must for fans of Black Sabbath, Ozzy Osbourne, and the rock 'n' roll memoir; highly memorable and recommended. A Grand Central hardcover. (Jan.) (c) Copyright PWxyz, LLC. All rights reserved

The legendary booze-addled metal rocker turned reality-TV star comes clean in his tell-all autobiography. Although brought up in the bleak British factory town of Aston, John "Ozzy" Osbourne's tragicomic rags-to-riches tale is somehow quintessentially American. It's an epic dream/nightmare that takes him from Winson Green prison in 1966 to a presidential dinner with George W. Bush in 2004. Tracing his adult life from petty thief and slaughterhouse worker to rock star, Osbourne's first-person slang-and-expletive-driven style comes off like he's casually relating his story while knocking back pints at the pub. "What you read here," he writes, "is what dribbled out of the jelly I call my brain when I asked it for my life story." During the late 1960s his transformation from inept shoplifter to notorious Black Sabbath frontman was unlikely enough. In fact, the band got its first paying gigs by waiting outside concert venues hoping the regularly scheduled act wouldn't show. After a few years, Osbourne and his bandmates were touring America and becoming millionaires from their riff-heavy doom music. As expected, with success came personal excess and inevitable alienation from the other members of the group. But as a solo performer, Osbourne's predilection for guns, drink, drugs, near-death experiences, cruelty to animals and relieving himself in public soon became the stuff of legend. His most infamous exploitsbiting the head off a bat and accidentally urinating on the Alamoare addressed, but they seem tame compared to other dark moments of his checkered past: nearly killing his wife Sharon during an alcohol-induced blackout, waking up after a bender in the middle of a busy highway, burning down his backyard, etc. Osbourne is confessional to a fault, jeopardizing his demonic-rocker reputation with glib remarks about his love for Paul McCartney and Robin Williams. The most distinguishing feature of the book is the staggering chapter-by-chapter accumulation of drunken mishaps, bodily dysfunctions and drug-induced mayhem over a 40-plus-year careera rsum of anti-social atrocities comparable to any of rock 'n' roll's most reckless outlaws. An autobiography as toxic and addictive as any drug its author has ever ingested. Copyright Kirkus Reviews, used with permission.
More book reviews at iDreamBooks.com