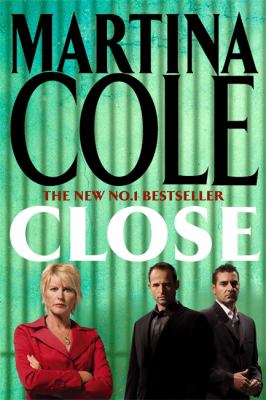 | Organised crime -- England -- London -- FictionGenre/Form: Detective and mystery fiction. | Thrillers (Fiction)Subject: Close, is the story of the women who are left behind. Set in London's dark and violent gangland, this novel tells the tale of a gutsy mother and her two sons, and their lives in and out of jail.
Tags from this library: No tags from this library for this title. Log in to add tags.
Fiction notes: Click to open in new window
No physical items for this record

Keep your friends close and your enemies closer. And your family should be closest of all.

Patrick Brodie knows exactly how far he's prepared to go to get what he wants. And he wants it all. Now. Before long, Patrick has become a legend in his own lifetime. Violently.

Lily Diamond is different from the kind of woman Patrick is normally attracted to. But together they are determined that their children will have everything they didn't. Until the unthinkable happens and Lily is left on her own to look after their family in a dangerous world. The Brodies must stay close to survive. But as everyone knows, your sins will find you out.

Close, is the story of the women who are left behind. Set in London's dark and violent gangland, this novel tells the tale of a gutsy mother and her two sons, and their lives in and out of jail.

Cole is the top best-selling adult fiction author in the United Kingdom, and this is her first novel to be published in the United States. Some in the media have touted her as another Jackie Collins, with Close being the English version of The Sopranos. This reviewer, however, as a fan of both Collins and the HBO hit show, just does not see the comparisons. Readers never really get a sense of who Patrick Brodie or Lil Diamond are because Cole merely stereotypes them as a hardened criminal and his "diamond in the rough" wife of 16 years, respectively, and only a few of their many children are actually given full-blown roles. Instead of letting readers figure things out, Cole hits them over the head with story. And the violence and graphic language she includes--perhaps because she feels it's expected in a mobster story--are detrimental to the plot. Overall, Cole attempts to cover too many years (40), even in 500-plus pages. Her book flops as a family saga, a thriller, and a crime story. Not recommended. [See Prepub Alert, LJ 3/15/08.]--Marianne Fitzgerald, Annapolis, MD (c) Copyright 2010. Library Journals LLC, a wholly owned subsidiary of Media Source, Inc. No redistribution permitted.

Sopranos fans will welcome British author Cole's U.S. debut, the U.K.'s #1 hardcover bestseller for 2006, which offers plenty of violence, sex, intrigue and skullduggery involving London's criminal Brodie family over several decades. In the 1960s, young Patrick Brodie cuts a path to the top by brashly brushing aside those running the city's East End clubs with their illegal liquor and prostitutes. Meanwhile, he marries a beautiful, abused factory girl, Lily Diamond, who soon bears him a brood. Pat provides brains and brawn, but Lily is the glue that holds the fractious family together as their fortunes rise and fall with increasing waves of violence. In the Brodies' world, the only law is corrupt, the only trust is in family (and that's not absolute) and the only certainty is death. Despite needless repetitions (Pat Brodie was "not a man to cross," "a man to respect," "a man only a fool would cross," etc.), this book should appeal to those who like their crime fiction raw. (July) (c) Copyright PWxyz, LLC. All rights reserved

Best-sellers don't always translate from one country to another, even when they're written in the same language. Cole has 14 chart-topping novels in the UK and yet remains largely unknown in the U.S. Her publisher hopes to change that by making Close (first published in 2006) her American debut. A committed marketing effort may well generate interest in Cole, but the question remains whether Americans will stick with her book. It seems unlikely. This sprawling family saga of London gangsters is sometimes violent yet curiously bloodless, marred by repetition and cliché, and although Cole clearly knows her turf devoid of the specifics that might make it come alive for readers unfamiliar with the milieu. Worse, she tends to cut away from scenes just as they get interesting, instead lingering endlessly on her characters' thoughts. This impressionistic approach leaves readers looking for solid anchors of plot, time line, and telling detail. It's a brick-size book that could have been cut by half without serious loss, and though things improve somewhat after the 100-page mark, the question is whether readers not on assignment will get that far. Bad books sometimes do become best-sellers, usually because they tap into our psyche in a particular way; this one obviously has strong appeal at home but, despite the strength of the pound versus the dollar, doesn't seem likely to travel.--Graff, Keir Copyright 2008 Booklist

Irish crime family rules the rackets in 1970s London. British crime writer Cole's first novel to be published in the United States is a gritty exploration of the rise and fall of a peculiarly Celtic mob dynasty. The depth of characterization that distinguished The Sopranos and The Godfather is sorely lacking here. Patrick Brodie is the undisputed kingpin of drug, gambling and prostitution operations in London's vast underworld, thanks to his carefully forged alliances with muscle--thug enforcers like the Williams brothers--and ethnic power bases, such as the Caribbean African element, led by Spider and his Rastafarian crew. Pat marries Lil, shy illegitimate daughter of Annie, who's always resented Lil, especially when the latter becomes her meal ticket. Lil and Patrick are a true love match, although as Lil gives birth to four children, she grows increasingly impatient with Patrick's irregular hours--"skulduggery" is not a nine-to-five job. Patrick, ever vigilant for incipient plots to topple him, takes spectacular revenge on a few errant snitches, former allies and crooked cops, but new mobsters are amassing influence. The traitorous Williams brothers aim to unseat Brodie and Spider once and for all. At home, Lil, pregnant with her fifth, brutally punishes her second son, kiddie sociopath Lance, for pushing a six-year-old girl off the school bus. Shortly before eldest son Patrick Jr.'s long-planned lavish tenth birthday party, the Williamses ambush and assassinate Patrick in the family foyer. In the aftermath of Patrick's removal, his archrival Lenny takes over, eliminating the brawny but brainless Williamses. Lil is forced to prostitute herself to Lenny to support her family. But Patrick Jr. is getting older and stronger every day and bears an uncanny resemblance, in looks and temperament, to his father. Under the radar, Lance, abetted by adoring granny Annie, is committing his most egregious crimes in the Brodie home. Cole's repetitious analyses of family dynamics and gang politics renders the book at least a third too long. A dismal sojourn in some very unpleasant company. Copyright ©Kirkus Reviews, used with permission.
More book reviews at iDreamBooks.com