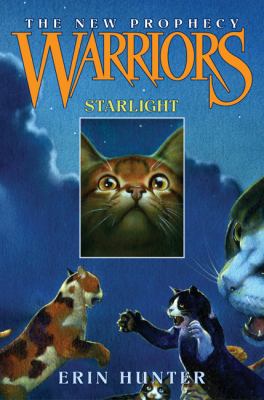 The fourth book in this second series, Warriors: The New Prophecy #4: Starlight, brings more adventure, intrigue, and thrilling battles to the epic world of the warrior Clans.

Before there is peace, blood will spill blood....

The Clans have finally arrived in their new home, and now they must struggle to establish territories, learn hidden dangers, and find a new place to communicate with StarClan. But more than one cat is harboring sinister plans that could lead to violence and darkness, and as the warriors wait for a sign, they begin to realize that the threats they face in the forest may not be as perilous as the threats they face from within.

The warrior cat Clans arrive at their new home and set about exploring and fighting over the unfamiliar territory.

In the third and fourth books in this series, the cats abandon their homes and travel to the new place foretold by StarClan. The Clans adapt to working together, then must separate to establish new territories. Hunter easily balances multiple plot lines and points of view, creating a believable world. [Review covers these Warriors: The New Prophecy titles: Dawn and Starlight.] (c) Copyright 2010. The Horn Book, Inc., a wholly owned subsidiary of Media Source, Inc. No redistribution permitted. All rights reserved.
More book reviews at iDreamBooks.com