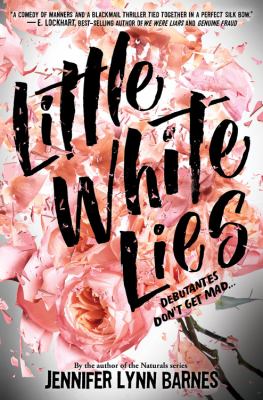 DDC classification: [Fic] Summary: Eighteen-year-old Sawyer accepts her estranged grandmother's bribe to live with her for a year, participate in the debutante season and ball, and possibly meet the father she has never known.
Tags from this library: No tags from this library for this title. Log in to add tags.

"I'm not saying this is Sawyer's fault," the prim and proper one said delicately. "But."
Eighteen-year-old auto mechanic Sawyer Taft did not expect her estranged grandmother to show up at her apartment door and offer her a six-figure contract to participate in debutante season. And she definitely never imagined she would accept. But when she realizes that immersing herself in her grandmother's "society" might mean discovering the answer to the biggest mystery of her life-her father's identity-she signs on the dotted line and braces herself for a year of makeovers, big dresses, bigger egos, and a whole lot of bless your heart . The one thing she doesn't expect to find is friendship, but as she's drawn into a group of debutantes with scandalous, dangerous secrets of their own, Sawyer quickly discovers that her family isn't the only mainstay of high society with skeletons in their closet. There are people in her grandmother's glittering world who are not what they appear, and no one wants Sawyer poking her nose into the past. As she navigates the twisted relationships between her new friends and their powerful parents, Sawyer's search for the truth about her own origins is just the beginning.
Set in the world of debutante balls, grand estates and rolling green hills, Little White Lies combines a charming setting, a classic fish-out-of-water story, and the sort of layered mystery only author Jennifer Lynn Barnes can pull off.

"By the author of the Naturals series"--Dust jacket.

Eighteen-year-old Sawyer accepts her estranged grandmother's bribe to live with her for a year, participate in the debutante season and ball, and possibly meet the father she has never known.

Eighteen-year-old Sawyer-a car mechanic and daughter of a single mom in the South-is offered a deal she cannot refuse: her estranged maternal grandmother, Lillian, a wealthy socialite, will give Sawyer half a million dollars if she agrees to live with her for one year and become a debutante. Sawyer accepts in the hope of discovering her father's identity within her grandmother's social strata, and she is soon wooing attractive young men at society events and befriending her cousin, Lily. Lily has plenty of secrets of her own-secrets that help unspool the mystery at this novel's center, having to do with a missing girl and a scandalous blogger. Time jumps between chapters and blog post interstitials may create confusion at the story's start, but after the structure smooths out, the momentum picks up, as do the secrets. Though Barnes (The Fixer) paints Sawyer as an outsider, and the young woman constantly protests the moneyed world into which she is dropped, the ease of her assimilation saps tension-she seems born for this life. Full of gossiping, conniving, and back-stabbing, this breezy read is light on mystery and heavy on made-for-film debutante antics. Ages 12-up. Agent: Elizabeth Harding, Curtis Brown. (Nov.) © Copyright PWxyz, LLC. All rights reserved.

Sawyer Taft is used to hard work: at 18, she spends her time fixing cars, looking out for her less-than-reliable bartender mom, and verbally dressing down the guys who think a female mechanic is asking to be hit on. But then her estranged grandmother Lillian unexpectedly shows up and offers Sawyer a job of a different kind. If Sawyer agrees to enter society as a debutante, Lillian is prepared to offer her a six-figure trust, more than enough to comfortably fund college. If that's not incentive enough, Sawyer's mom has always been tight-lipped about Sawyer's dad, but Sawyer knows he's someone from her mom's high-society days, and she's hungry for clues. But the life of a debutante isn't just fancy parties and pretty dresses, and Sawyer soon gets swept up in a mystery that involves her mom's past and her own future, and it could be darker than she ever suspected. Fans of the nonstop intrigue of the Pretty Little Liars series will devour this glamorous, family-focused mystery that's led by a whip-smart, tough-as-nails heroine.--Maggie Reagan Copyright 2018 Booklist

When eighteen-year-old Sawyer's maternal grandmother (whom she's never met) offers to pay her to participate in debutante season, Sawyer accepts--partly because she's hoping to discover the identity of her biological father. But it's not just her family hiding something--the deb world is full of dirty secrets. Though it's sometimes hard to keep track of the characters' complicated familial connections, the story is enjoyably scandalous. (c) Copyright 2019. The Horn Book, Inc., a wholly owned subsidiary of Media Source, Inc. No redistribution permitted.

Eighteen-year-old small-town mechanic Sawyer Taft gets much more than she bargains for when she's made an offer she can't possibly refuse.Sawyer, who is white (as are all major characters), has never known her father's identity, and her mother, Ellie, hasn't exactly been the most reliable caretaker: In fact, sometimes Sawyer feels more like the mother in their relationship. Evidently Sawyer's maternal grandmother, "aging Southern belle" Lillian Taft, tossed Ellie out when she became pregnant at 17 and has never kept in touchor so Ellie claimed. When Lillian offers Sawyer a contract promising half a million bucks and a chance to find out who her biological father really is, Sawyer signs, but she must participate in all the season's debutante events. Sawyer's relatives don't quite match the picture that her mother painted: Lillian is chock-full of Southern charm but with an edge that the wryly funny, no-nonsense Sawyer admires, and she grows close to her cousin, Lily. When Sawyer stumbles onto the dark secrets of a senator's daughter out for revenge, finding her father takes a back seat to events that could signal disaster for the Tafts. One thing is certain: Nothing, and no one, is what it seems. Barnes' (Bad Blood, 2017, etc.) immersive world of Southern debs hides a darkness beneath the white-gloved veneer of civility.Sawyer's smart narrative, along with plenty of biting social commentary, will keep readers turning the pages. (Fiction. 14-18) Copyright Kirkus Reviews, used with permission.
More book reviews at iDreamBooks.com