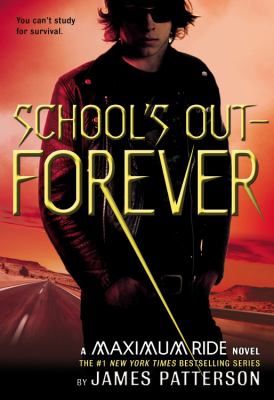 | Teen adventure stories -- Juvenile fiction | Teen science fiction -- Fiction | Human experimentation in medicine -- Juvenile fiction | Teen suspense fictionGenre/Form: Science fiction. | Fantasy fiction. | Teen fiction.DDC classification: [Fic] Summary: After a short stay with an FBI agent who gives them a chance to attend school and live a normal life, the six genetically-altered, winged youths head toward Florida and Max's ultimate destiny--to save the world, whether she wants to or not.
Tags from this library: No tags from this library for this title. Log in to add tags.
Fiction notes: Click to open in new window

In this eagerly awaited follow-up, brave bird-kid Max and her flock are discovered by an FBI agent and forced to go to "school." There is no such thing as an ordinary day as Max deciphers how and when she's supposed to save the world, and she faces her greatest enemy--a clone of herself. Little, Brown and Company

After a short stay with an FBI agent who gives them a chance to attend school and live a normal life, the six genetically-altered, winged youths head toward Florida and Max's ultimate destiny--to save the world, whether she wants to or not.

Gr 6-10-This book picks up exactly where The Angel Experiment (Little, Brown, 2005) left off. The six genetically engineered bird children have escaped from the wolf-hybrid Erasers again, Max is still hearing "The Voice" in her head, and she is still reeling from the revelation that Ari, the most persistent of all the Erasers, is dead by her hand and that he might be her brother. From this point forward, there is action, but no distinctive plot. The closest the story line comes to compelling is when the kids are taken in and enrolled in school by a seemingly kind woman who just happens to be a high-ranking FBI agent. It will not shock readers when it is eventually revealed that she has betrayed them. This book is full of as many twists, turns, and conspiracies as an episode of daytime drama. And just like a soap opera, it relies heavily on melodrama until the very end, whereupon readers discover that very little has actually happened. The story is disappointingly anticlimactic and violent. Still, it does have some appeal-the children continually outmaneuver their attackers without permanent damage. Plus, the talking dog they pick up during their adventures is sure to entertain.-Heather M. Campbell, Philip S. Miller Library, Castle Rock, CO (c) Copyright 2010. Library Journals LLC, a wholly owned subsidiary of Media Source, Inc. No redistribution permitted.

Gr. 7-10. Max and her flock are back in this new volume in the Maximum Ride series, a follow-up to The Angel Experiment (2004). In a flying fight with Erasers, Fang is injured so seriously that the flock takes him to a hospital. It's obvious he's not a normal human (having wings and avian DNA), so it isn't long before the FBI shows up. Anne Walker, the lead agent, takes the flock home to her Virginia farm, where she tries to mother the kids and enrolls them in a nearby private school. Living a somewhat normal life for the first time, Max, 14, manages a date and a first kiss, and others in the flock begin the quest to find their birth parents. Then everything falls apart, and the six kids face betrayal and extreme danger. Patterson, an accomplished storyteller, once again demonstrates his ability to write page-turning action scenes, this time leavening the suspense with some surprising humor; at one point, Max declares that she's Avian American. Fans of the first book will be delighted with this continuation of the story, even though the book leaves the fate of the flock wide open\b . For more about Patterson's jump into YA, see the adjacent Story behind the Story. --Diana Herald Copyright 2006 Booklist

Slightly choppier than the first book, this installment finds Max and her motley flock of human-bird genetic hybrids seeking temporary refuge in the home of an FBI agent. Forced into a formal education, they research their past amid double-identity mayhem. Despite an episodic plot line, fans will be thrilled with the ongoing character growth and well-timed revelations. (c) Copyright 2010. The Horn Book, Inc., a wholly owned subsidiary of Media Source, Inc. No redistribution permitted. All rights reserved.

Readers are in for another exciting wild ride of fights (bloody) and flights (in the sky) as Max and her flock struggle to stay alive. 98% human with 2% avian genes grafted on, these six winged, scrappy kids soar powerfully through the air. In this second installment, they head towards Washington D.C. in pursuit of their unknown parents of origin, who may or may not know that the kids were raised by genetic scientists prone to torture. Max's straightforward, sardonic first-person voice does most of the narration as the flock navigates a rescue by a vaguely maternal FBI honcho, a stint in a regular school (or is it?) and constant pursuit by Erasers (deadly wolf-human combinations). Who controls the Voice in Max's head telling her to save the world? What would that even mean? Is an international corporation the enemy? Who's in league with the evil scientists who created the flock? These questions are yet unanswered, leaving readers breathless for the follow-up to this action-packed page-turner. (Science fiction. YA) Copyright ©Kirkus Reviews, used with permission.
More book reviews at iDreamBooks.com