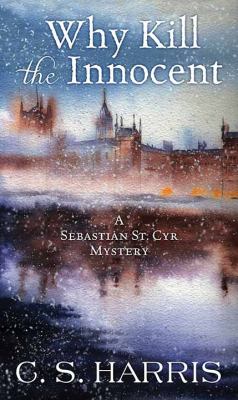 Genre/Form: Regency fiction. | Historical fiction. | Detective and mystery fiction.DDC classification: 813/.54 Summary: "London, 1814. A brutal murder draws nobleman Sebastian St. Cyr into the tangled web of the British royal court where intrigue abounds and betrayal awaits"-- Provided by publisher.
Tags from this library: No tags from this library for this title. Log in to add tags.
Fiction notes: Click to open in new window

London, 1814. As a cruel winter holds the city in its icy grip, the bloody body of a beautiful young musician is found half-buried in a snowdrift. Jane Ambrose's ties to Princess Charlotte, the only child of the Prince Regent and heir presumptive to the throne, panic the palace, which moves quickly to shut down any investigation into the death of the talented pianist. But Sebastian St. Cyr, Viscount Devlin, and his wife, Hero, refuse to allow Jane's murderer to escape justice.

In his 13th investigation (after Where the Dead Lie), Sebastian St. Cyr and his wife, Hero, work to expose the seamy underbelly of Regency London in a case that begins on the frozen streets of down-at-heels -Clerkenwell but reaches all the way up to the halls of power. When Hero discovers the body of Jane Ambrose, it is obvious that she did not die of the killing cold; it is also apparent that the Palace will want to hush up the death of the crown princess's piano teacher. When St. Cyr refuses to let the case rest, he must sort through conflicting motives, from an unfaithful husband to power brokers who feared she knew too many secrets. His dogged determination eventually finds an answer close to home. The characters of St. Cyr and Hero defy societal expectations in ways that seem plausible for their time while speaking strongly to contemporary readers. St. Cyr is haunted by PTSD and a search for his own shadowed identity, while Hero proves to be his equal partner at every turn. The mystery highlights the circumscribed course of women's lives of the Regency era while exposing the rot that underlies the period's glitter. VERDICT Highly recommended for lovers of historical thrillers. [See Prepub Alert, 11/15/17.]- Marlene Harris, Reading Reality, LLC, Duluth, GA © Copyright 2018. Library Journals LLC, a wholly owned subsidiary of Media Source, Inc. No redistribution permitted.

Harris's fascinating 13th mystery set in Regency-era London (after 2017's Where the Dead Lie) centers on the plight of Princess Charlotte, heiress presumptive to the throne, who's being encouraged to marry William, Prince of Orange, a union designed to benefit her father's political agenda. Hero Devlin, Sebastian St. Cyr's wife, and midwife Alexi Sauvage are hurrying home from helping with the delivery of an infant when they literally stumble on the body of a young woman, whom Hero recognizes as Jane Ambrose, Princess Charlotte's piano teacher. An examination of the corpse indicates that Jane was killed elsewhere and dumped in the street. Soon Sebastian and Hero are investigating the death, in spite of aggressive efforts on the part of the palace to label it as accidental and so shield Princess Charlotte from any hint of scandal. Or is there a more sinister reason for their actions? Harris ably weaves real events into a satisfying mystery that's chock-full of engrossing historical tidbits. Agent: Helen Breitwieser, Cornerstone Literary. (Apr.) © Copyright PWxyz, LLC. All rights reserved.

*Starred Review* In the thirteenth Sebastian St. Cyr mystery, after Where the Dead Lie (2017), Sebastian's wife, Hero, literally trips over a frozen corpse in an unsavory part of London during a blizzard. Jane Ambrose was a brilliant musician with a tragic personal life and a connection to Princess Charlotte. While the city builds a Frost Fair on the frozen Thames, Hero and Sebastian pursue separate lines of inquiry. Sebastian strong-arms answers from Jane's husband and other unsavories. Hero navigates court intrigue and her network of underappreciated, brilliant women. Both are thwarted by Hero's father, the Machiavellian Lord Jarvis, who will do anything to keep scandal away from his cousin, the prince regent. Those who have watched Sebastian and Hero go from adversaries to true partners will relish the pair's commitment to working together to find justice. Harris, as always, manages to weave political and military issues of the day and a sense of moral outrage on behalf of those society leaves behind, especially, poor women. Also provided is a crash course on the cruelties and whims of the regent's family life, which adds another layer to the unfortunate puzzle of Jane Ambrose. The best St. Cyr yet.--Maguire, Susan Copyright 2018 Booklist

The famous London Frost Fair of 1814, which took place on the frozen River Thames, provides the chilling backdrop to a death caused by a woman's desire to cast off the shackles of her unhappy life.On a bitterly cold and snowy day, Hero Devlin, a reformer who often visits some of London's most squalid areas, stumbles over the body of Jane Ambrose, piano teacher to Princess Charlotte, the prince regent's daughter. Hero sends for her husband, Sebastian St. Cyr, Viscount Devlin, knowing that the death of someone close to the princess will be made to look like an accidentwhich it might indeed have been if the body had not been moved from another place. Hero and Devlin, no strangers to mystery (Where the Dead Lie, 2017, etc.), resolve to find the truth even though it will be both difficult and dangerous. Hero's father, Charles, Lord Jarvis, the regent's cousin and hatchet man, will do nothing to help her. The peevish, petulant regent, hated by most of the populace, is intent on divorcing his wife and keeping his daughter isolated from society because she's more popular than he is. The couple's sleuthing turns up all too many possible killers, ranging from Jane's husband to Nathan Rothschild, and motives, from jealousy to dangerous secrets. Jane's twin brother received the acclaim his more talented sister deserved. She was also denied credit for writing her husband's popular operas and was often mistreated by him. And a hurried autopsy shows that she had been raped in the days before her death. Hero and Devlin use all their connections high and low to turn up clues as they crisscross the frozen city.Harris does a fine job of exploring the striking inequality and political intrigue of the Regency period in a mystery packed with historical detail and myriad motives. Copyright Kirkus Reviews, used with permission.
More book reviews at iDreamBooks.com