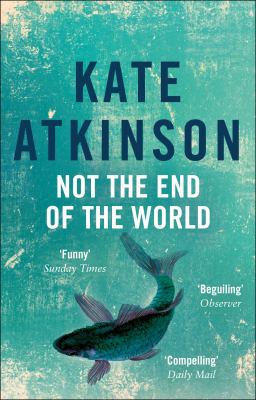 Genre/Form: Detective and mystery fiction.DDC classification: 823.914 Review: "It is summer, it is the Edinburgh Festival. People queuing for a lunchtime show witness a road-rage incident - an incident that changes the lives of everyone involved. Jackson Brodie, ex-army, ex-police, ex-private detective, is also an innocent bystander - until he becomes a suspect."--BOOK JACKET.
Tags from this library: No tags from this library for this title. Log in to add tags.
Fiction notes: Click to open in new window

What is the real world? Does it exist, or is it merely a means of keeping another reality at bay?

Not the End of the World is Kate Atkinson's first collection of short stories. Playful and profound, they explore the world we think we know whilst offering a vision of another world which lurks just beneath the surface of our consciousness, a world where the myths we have banished from our lives are startlingly present and where imagination has the power to transform reality.

From Charlene and Trudi, obsessively making lists while bombs explode softly in the streets outside, to gormless Eddie, maniacal cataloguer of fish, and Meredith Zane who may just have discovered the secret to eternal life, each of these stories shows that when the worlds of material existence and imagination collide, anything is possible.

"It is summer, it is the Edinburgh Festival. People queuing for a lunchtime show witness a road-rage incident - an incident that changes the lives of everyone involved. Jackson Brodie, ex-army, ex-police, ex-private detective, is also an innocent bystander - until he becomes a suspect."--BOOK JACKET.

The characters in most of these stories are as bleak and staid as Atkinson's portrayal of the Scottish landscape. The women in particular seem to emerge out of nowhere and end up not much further along, though listeners will still find themselves briefly caught up in their lives. As the tales, read by Geraldine James, mount one on another, there is slight movement toward death or abandonment, often under unusual (and somewhat contrived) circumstances, as if these lives were doomed from the start. Characters reappear briefly and unexpectedly in other stories though not with enough regularity to make interconnected lives central to the collection's structure. While the writing is excellent, and one has to admire the author's ability to build on so very little, if you're not paying attention you could suddenly find yourself in the middle of another story. Atkinson's debut novel, Behind the Scenes at the Museum, won the prestigious Whitbread Award, so she should have a loyal following in America as well as Great Britain.-Rochelle Ratner, formerly with Soho Weekly News, New York (c) Copyright 2010. Library Journals LLC, a wholly owned subsidiary of Media Source, Inc. No redistribution permitted.

Atkinson, who began her career with Behind the Scenes at the Museum, a Whitbread Book of the Year, and enjoyed good reviews for two more novels, now gathers together this suite of comparatively loosely connected stories. Atkinson's work has grown increasingly diffuse; her most recent book, Emotionally Weird, was printed in three fonts, representing separate strings of narrative. This collection takes that conceit without the typesetting extravagance one step further, opening and closing on two women who seem to tell one another the intervening tales. Atkinson's Scheherazades, singletons of indeterminate age named Charlene and Trudi, appear first in "a food hall as vast as a small city," and by the book's end which may or may not be the end of the world they're starving to death in a squalid, freezing flat in what feels like an apocalyptic present. In the women's restless imaginations, readers meet more than one girlfriend (in different stories, and each unbeknownst to the other) of a man named Hawk; a gaggle of perfect-toothed American Zane sisters; and a governess who may or may not be a goddess. Some of Atkinson's devices a giant cat who impregnates a woman with kittens, an evil twin who gets to have all the fun make for stories as simple as fables, but some, like the nanny goddess and the virtuoso, multiple-voiced "Dissonance," are sharp and memorable, full of astutely observed family dynamics. While not as intense or as unified as Atkinson's full-length work, this is a sharp and wholly original collection. (Dec. 3) (c) Copyright PWxyz, LLC. All rights reserved

Although they don't carry quite the emotional weight of George Saunders' brilliant stories ( CivilWarLand in Bad Decline, 1996), Atkinson's exceptionally entertaining tales display the same wild inventiveness. Sometimes the same characters and images (she is especially fond of wolf-skin gloves and Buffy the Vampire Slayer) recur in the 12 stories collected here, which, in the main, feature delightfully witty people marshaling their resources to confront a world that often disappoints. In Unseen Translation, a nanny who resembles a Marine Corps Mary Poppins spirits eight-year-old Arthur away from his wealthy, neglectful parents. In the more somber Sheer Big Waste of Love, Addison Fox, whose mother was a prostitute, carries with him the memory of being violently rejected by his wealthy father; however, an encounter with the man's legitimate children makes him realize things could have been much worse. Other titles feature people coping with the end of the world by going shopping and a woman killed in a car wreck who finds she is invisible, housebound, and addicted to Oprah. --Joanne Wilkinson Copyright 2003 Booklist

Twelve debut stories from Whitbread winner Atkinson (Behind the Scenes at the Museum, 1996) are unparalleled in deftness but in their depth less compelling. Characters from one tale are sometimes referred to in another--as with Meredith Zane, whose aunt Nanci Zane married a Briton (in the 1970s) and then died during dentistry ("The Bodies Vest"), causing her own dentist father, back in California, to shoot himself. Earlier in the volume but later in time, Meredith ("Transparent Fiction") is 25 and living with a wannabe scriptwriter in London. When Meredith twitches the cape from the shoulders of a famous producer's wife, the aging lady turns to dust. Ovid-like metamorphoses appeal to Atkinson, who prefaces the stories with Latin passages, even Greek, allusions that tend to make the stories seem the more minor. A prolixity of cuteness and verve can give energy but can also cloy ("Meredith, Baxter, and Wilson--which sounded like a firm of lawyers--were all girls, as were the endlessly confusing Taylor, Tyler, Skyler, and Sky"). The pieces are nothing, though, if not capable in their details, as in "Tunnel of Fish," about a young deaf boy's fantasies, or "Unseen Translation," about a likably strident nanny who seeks to rescue her charges from the "ordinary." More familiar still is "Temporal Anomaly," about an Edinburgh woman who hovers, watching her family's reactions after she "dies" in a car wreck. In "Wedding Favors," a divorced mother is alone after her last child leaves for college, while in "The Cat Lover," a woman's pet grows huge and she gets pregnant by him. Opening and closing the volume are twin stories, the first about futuristic threats to the world ("Charlene and Trudi Go Shopping"), the other ("Pleasureland") about its end. In both, the characters rattle off lists of things to do, eat, and buy in another Ovid-like device that, here, just seems minimizing and affected. Stories, on balance, that appear above all to love the sound of their own voices. Copyright ©Kirkus Reviews, used with permission.
More book reviews at iDreamBooks.com