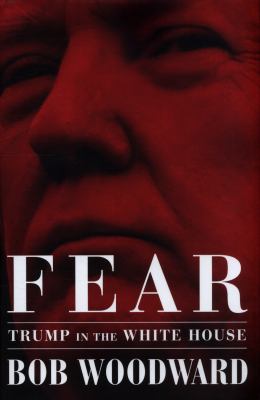 Genre/Form: Biographies.DDC classification: 973.933092 Summary: With authoritative reporting honed through eight presidencies from Nixon to Obama, author Bob Woodward reveals in unprecedented detail the harrowing life inside President Donald Trump’s White House and precisely how he makes decisions on major foreign and domestic policies. Woodward draws from hundreds of hours of interviews with firsthand sources, meeting notes, personal diaries, files and documents. The focus is on the explosive debates and the decision-making in the Oval Office, the Situation Room, Air Force One and the White House residence.
Tags from this library: No tags from this library for this title. Log in to add tags.

THE INSIDE STORY ON PRESIDENT TRUMP, AS ONLY BOB WOODWARD CAN TELL IT.

' Fear is a meticulously researched account of a White House and a president in financial, legal and personal disorder...essential reading...' Daily Mail

'The sheer weight of anecdotes depicts a man with no empathy and a pathological capacity for lying.' - The Financial Times

'Fuelling his narrative is an astonishing cast of rogues, ideologues, self-made millionaires and men in uniform who have spent the past two years in and out of Trump's administration.' - The Sunday Times

'Woodward's meticulous account of office intrigues, the president's men don't seem to be trembling with fright. What they mostly feel is contempt for Trump or pity for his ignorance and the "teenage logic" of his obsessively vented grievances.' - The Observer

'Horribly fascinating. Strongly recommended. If you can bear it.' Richard Dawkins

'To me the standout message from the book...is that the president is a bit clueless, a bit vain, a bit dangerous even; but his people are utterly at sea...' - Justin Webb, The Times

'He is the master and I'd trust him over politicians of either party any day of the week.' -- Peter Baker, New York Times

'His work has been factually unassailable . . . In an age of 'alternative facts' and corrosive tweets about 'fake news,' Woodward is truth's gold standard.' - Jill Abramson, The Washington Post

' Fear depicts a White House awash in dysfunction, where the Lord of the Flies is the closest thing to an owner's manual.' The Guardian

'I wonder how many journalists have arrived in Washington over the years dreaming of becoming the next Bob Woodward . . . Though his books are often sensational, he is the opposite of sensationalist. He's diligent, rigorous, fastidious about the facts, and studiously ethical . There's something almost monastic about his method . . . He's Washington's chronicler in chief .' -- Nick Bryant, BBC

'I've been on the receiving end of a Bob Woodward book. There were quotes in it I didn't like. But never once -- never -- did I think Woodward made it up. Anonymous sources have looser lips and may take liberties. But Woodward always plays is straight. Someone told it to him.' -- Ari Fleisher, White House Press Secretary for George W. Bush


With authoritative reporting honed through eight presidencies from Nixon to Obama, author Bob Woodward reveals in unprecedented detail the harrowing life inside President Donald Trump's White House and precisely how he makes decisions on major foreign and domestic policies. Woodward draws from hundreds of hours of interviews with firsthand sources, meeting notes, personal diaries, files and documents. The focus is on the explosive debates and the decision-making in the Oval Office, the Situation Room, Air Force One and the White House residence.

Fear is the most intimate portrait of a sitting president ever published during the president's first years in office.

With authoritative reporting honed through eight presidencies from Nixon to Obama, author Bob Woodward reveals in unprecedented detail the harrowing life inside President Donald Trump’s White House and precisely how he makes decisions on major foreign and domestic policies. Woodward draws from hundreds of hours of interviews with firsthand sources, meeting notes, personal diaries, files and documents. The focus is on the explosive debates and the decision-making in the Oval Office, the Situation Room, Air Force One and the White House residence.

In a compulsively readable narrative "drawn from hundreds of hours of interviews with firsthand participants and witnesses," Washington Post associate editor Woodward contends that members of the Trump administration took steps to "intentionally block some of what they believed were the president's most dangerous impulses." Woodward deems those actions "no less than an administrative coup d'etat." In the most dramatic example, Gary Cohn, Trump's top economic advisor, removed a draft letter from the Oval Office that terminated a free trade agreement with South Korea, which constituted, in Cohn's view, "a potential trigger to a national security catastrophe." As Cohn had hoped, Trump "never noticed the missing letter." Woodward also offers other sensational anecdotes unrelated to his administrative coup theme-such as an argument between chief of staff John Kelly and the head of the Immigration and Customs Enforcement union that was so heated that Trump later said he thought the two were going to get into a fistfight-as well as the occasional positive comment, such as those about the First Couple's affection for each other, and Trump's newspaper-reading habits. He ends with another sensational claim: that John Dowd, Trump's lawyer for the special counsel Russia investigation, told Trump that he would end up behind bars if he agreed to be interviewed by the special counsel, and considered Trump "a fucking liar." Woodward's reporting, with its heavy reliance on "multiple deep background interviews with firsthand sources" who remain anonymous, will be problematic for some, especially those not already inclined to believe the worst about the president. But readers who trust the reporting will find this to be both entertaining and disturbing reading. (Sept.) © Copyright PWxyz, LLC. All rights reserved.

Michael Wolff told us about it, Omarosa flaunted it, and now veteran White House watcher Woodward pounds it home. The wheels have come off the White House bus. Of course, anyone with access to a TV set or a news feed is already aware of the book's juiciest bits: General John Kelly calling President Trump an idiot, or Trump lawyer John Dowd telling his client that a sit-down with Robert Mueller would lead to an orange jumpsuit. It requires the book as a whole, however, to really convey what a dysfunctional environment the Trump landscape has become. Woodward's writing, as in previous books, leans toward the leaden. The way he uses/ignores quotation marks and his tendency to pop into the narrative are particularly annoying. Yet, when he describes the key players together in a room in full cry, fighting, for example, about the response to Charlottesville, the book is riveting. Trump's temper, his obsession with image, his incapacity to do his job or to even understand some of the most basic responsibilities of the presidency these are the things that take readers, along with many of the president's staffers, through the looking glass darkly. But what is equally disconcerting, displayed here again and again, is Trump's inability to take advice, along with his unwavering faith in his "gut." Still, at times, Woodward is able to make Trump relatable as an Everyman infuriated by government; after all, who hasn't wondered about the point of staying in Afghanistan after 17 years? Although there's no sourcing, it's not difficult to figure out who spoke to Woodward. The perspectives of Dowd and economic advisor Gary Cohn are apparent, and Steve Bannon's presence is obvious whenever an interviewee describes something brilliant being said or done by . . . Steve Bannon. The title of the book comes from an interview in which the president states that true power comes through fear. Well, this look inside the Trump White House is pretty scary.--Ilene Cooper Copyright 2018 Booklist

A dish-filled tiptoe through the current White House in the company of an all-knowing tour guide, legendary Washington Post investigative reporter and definitive insider Woodward (The Last of the President's Men, 2015, etc.)."He's always looking for adult supervision." So says big-money donor Rebekah Mercer to alt-right mastermind Steve Bannon of Donald Trump early on in Woodward's book, setting a theme that will be sounded throughout the narrative. By the author's account, Trump, sensitive and insensitive, out of his element and constantly enraged, cannot be trusted to act on his own instincts while anywhere near the Oval Office. Indeed, the earliest and instantly newsworthy moment of the book comes when economic adviser Gary Cohn spirits away a letter from Trump's desk that would have broken the U.S. alliance with South Korea. Trump demanded the letter but then, it seems, forgot about it in its absence. "It was no less than an administrative coup d'tat," writes Woodward, "an undermining of the will of the president of the United States and its constitutional authority." It's not the sole instance, either, as the author steadily recounts. Drawing on deep background, meaning that sources cannot be identifiedthe reasons are immediately evidentWoodward ticks down a long list of insiders and their various ways of adapting to the mercurial president, sometimes successfully but more often not. One figure who can be seen constantly walking that line is South Carolina Sen. Lindsey Graham, whom former staffer Reince Priebus sold on Trump by saying, "you're a lot of fun. He needs fun people around him." Trump emerges as anything but funbut also rather easily managed by those around him, so long as he is able to sign documents ("Trump liked signing. It meant he was doing things, and he had an up-and-down penmanship that looked authoritative in black Magic Marker") and otherwise look presidential.Woodward's book will shock only those who haven't been paying attention. For those who have, it reinforces a strongly emerging narrative that there's a serious need for grown-ups on Pennsylvania Avenuegrown-ups who have read the Constitution. Copyright Kirkus Reviews, used with permission.
More book reviews at iDreamBooks.com