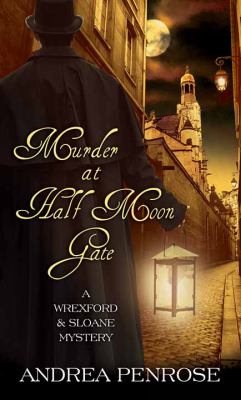 Genre/Form: Regency fiction. | Historical fiction. | Detective and mystery fiction.DDC classification: 813/.54 Summary: "A wealthy lord who is a brilliant scientist ... an enigmatic young widow who secretly pens satirical cartoons ... a violent killing disguised as a robbery ... Nothing is as it seems in Regency London, especially when the Earl of Wrexford and Charlotte Sloane join forces to solve a shocking murder"-- Provided by publisher.
Tags from this library: No tags from this library for this title. Log in to add tags.

When Lord Wrexford discovers the body of a gifted inventor in a dark London alley, he promptly alerts the watchman and lets the authorities handle the matter. But Wrexford soon finds himself drawn into the murder investigation when the inventor's widow begs for his assistance, claiming the crime was not a random robbery.

"A wealthy lord who is a brilliant scientist ... an enigmatic young widow who secretly pens satirical cartoons ... a violent killing disguised as a robbery ... Nothing is as it seems in Regency London, especially when the Earl of Wrexford and Charlotte Sloane join forces to solve a shocking murder"-- Provided by publisher.

After a night of gambling, Lord -Wrexford and his friend Sheffield, discover a dead body in an alley. Always a scientist, -Wrexford checks on the victim, although he turns the case over to a watchman. It isn't long before the victim's widow shows up at Wrexford's home begging for his assistance, claiming he had once helped her husband, an inventor, who had been working a revolutionary steam engine design. Wrexford turns to Charlotte Sloane, who under the pseudonym A.J. Quill, is recognized as a skilled satirical cartoonist. Together, the two use his society friends, her network of informers, and a group of clever street urchins to investigate the murder of a man whose inventions could change industry and England forever. VERDICT The compelling follow-up to Murder on Black Swan Lane is an intricately plotted mystery set in Regency England. Its complex story line and authentic historical details bring the early days of the Industrial Revolution vividly to life. Bound to fascinate readers of C.S. Harris and even fans of Victorian mysteries.-Lesa Holstine, Evansville Vanderburgh P.L., IN © Copyright 2018. Library Journals LLC, a wholly owned subsidiary of Media Source, Inc. No redistribution permitted.

Early in Penrose's able second Regency mystery (after 2017's Murder on Black Swan Lane), the Earl of Wrexford, a respected amateur chemist, is returning home from a night of gambling when he stumbles over a mutilated corpse in London's disreputable St. Giles district. He's shocked to learn that the victim is an acquaintance, Elihu Ashton, a textile factory owner who shares his scientific bent. Elihu's widow, Isobel, who reveals that Elihu recently designed a new type of steam engine with huge profit potential, asks Wrexford's help in discovering the killer. Z-shaped slashes on the body point to a radical anti-industrial group called the Workers of Zion, but additional clues persuade Wrexford and his detecting partner, artist Charlotte Sloane, that the crime is more complex. Elihu's assistant and the drawings of his invention go missing, a coded message turns up, and everyone from Isobel to Elihu's investors is hiding secrets. Penrose reveals intriguing new aspects of her protagonists' characters and relationship in a story linked to the era's technological and social changes. Agent: Gail Fortune, Fortune Talbot Agency. (Apr.) © Copyright PWxyz, LLC. All rights reserved.

A daring pair of Regency sleuths tackle a series of coldblooded murders.The Earl of Wrexford met Charlotte Sloane when they were forced to work together to solve a dastardly crime (Murder on Black Swan Lane, 2017). Wrexford is a wealthy, easily bored aristocrat with a scientific bent. For her part, the mysterious Charlotte, under the nom de plume A.J. Quill, which she took over from her late husband, uses her artistic talents and sharp wit to sell her satirical drawings. When Wrexford and his friend Christopher Sheffield stumble over the brutally murdered body of well-known inventor Elihu Ashton, he can't refuse the widow's request to find the killer. Isobel Ashton suspects that her husband's killer wanted to steal the rights to his new invention, which could make the first person to file a patent very wealthy indeed. Charlotte, meanwhile, is moving to a larger house in a better neighborhood along with Raven and Hawk, the chief boys among the street urchins she uses to keep up with the latest gossip and misdeeds that provide grist for her satires. After Wrexford enlists Charlotte's network to help track down Ashton's killer, their suspicions are divided among the widow, who is stunningly attractive but amazingly cool; Ashton's secretary and assistant; and investors hungry to enrich themselves. Gabriel Hollis, who had something to do with the note that lured Ashton to his death, is the next to die. Although the murders have been set up to look like the work of a group of radical workers whose jobs have been taken over by machines, the sleuths feel more personal relationships hold the key to the case.Penrose deftly combines a Regency romance with a tricky mystery that delves into social unrest and the darker side of this storied period. Copyright Kirkus Reviews, used with permission.
More book reviews at iDreamBooks.com