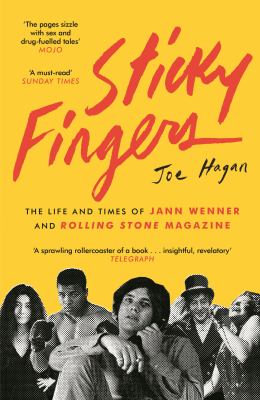 Sticky fingers : the life and times of jann wenner and rolling stone magazine.

Genre/Form: BiographiesDDC classification: 070.5092 Summary: "Sticky fingers: the Life and Times of Jann Wenner and Rolling Stone Magazine is the story of how one man's ego and ambition captured the 1960s youth culture of rock and roll and turned it into a hothouse of fame, power, politics, and riches that would last for fifty years. Drawn from dozens of hours of interviews with Wenner, who granted Joe Hagan exclusive access to his vast personal archive of correspondence, rare documents, recordings, and never-before-seen images, and featuring conversations with many of the greatest superstars of our time, this biography tells how Wenner partnered with such rock luminaries as John Lennon, Mick Jagger, and Bob Dylan to manufacture an unforgettable cultural mythology in words and images every other week for five decades."-- Back cover.
Tags from this library: No tags from this library for this title. Log in to add tags.

You've heard the controversy, now read the book:Sticky Fingers is Joe Hagan's pulsing account of 50 years of rock'n'roll excess from Jann Wenner, founder of Rolling Stone magazine and one of the best-connected men of the twentieth century. Featuring exclusive interviews with Mick Jagger, Bruce Springsteen, Paul McCartney, Yoko Ono, Tom Wolfe, Bette Midler and many more, Hagan's book captures the spirit of the age and paints an unforgettable portrait of one of the most significant cultural forces of our time.

"Sticky fingers: the Life and Times of Jann Wenner and Rolling Stone Magazine is the story of how one man's ego and ambition captured the 1960s youth culture of rock and roll and turned it into a hothouse of fame, power, politics, and riches that would last for fifty years. Drawn from dozens of hours of interviews with Wenner, who granted Joe Hagan exclusive access to his vast personal archive of correspondence, rare documents, recordings, and never-before-seen images, and featuring conversations with many of the greatest superstars of our time, this biography tells how Wenner partnered with such rock luminaries as John Lennon, Mick Jagger, and Bob Dylan to manufacture an unforgettable cultural mythology in words and images every other week for five decades."-- Back cover.

Journalist Hagan's biography of Jann Wenner, the ambitious and contentious founder of Rolling Stone, marks the 50th anniversary of the magazine's debut in San Francisco during the Summer of Love in 1967. Wenner cultivated a swath of cultural icons, including photographer Annie Leibovitz and journalist Hunter S. Thompson. As an editor, he fostered their careers and sometimes bitterly alienated them. Born in New York City in 1946, Wenner was the son of a California businessman and an indifferent mother; a difficult child, he was often asked to leave the private schools he attended. His childhood was disrupted by his parents' divorce, and enduring a strained parental relationship, he began to exhibit his lifelong desire for social climbing. During his years at the University of California at Berkeley, he fell in with alternative journalists. At 23, with money borrowed from family, he launched Rolling Stone. Although Wenner ran the magazine into near bankruptcy several times, the publication's unique place in American culture is largely owing to his overt drive, which Hagan skillfully recounts using primary source documents, personal letters, and exclusive interviews. VERDICT This biographical chronicle of the cultural evolution from the 1960s to the present is a must-read for counterculture enthusiasts and historians.-John Muller, Washington, DC, P.L. © Copyright 2017. Library Journals LLC, a wholly owned subsidiary of Media Source, Inc. No redistribution permitted.

As freelance writer Hagan posits in this searingly honest biography, Rolling Stone and its founder, Jann Wenner, turned rock stars into celebrities, fed salacious fare to slavering fans, and assembled a staff of writers (including Ralph Gleason, Greil Marcus, and Jon Landau) who elevated rock music criticism into serious writing. Wenner, who founded the magazine in 1967, was a schmoozer who was equally capable of making close friends and repelling them, as adept at publishing gushing profiles of his favorite artists as firing at those he disliked or against whom he held a grudge. Drawing on hundreds of hours of interviews with Wenner (who exercised no control over the book), his family and friends, writers who've worked for the magazine, and musicians, Hagan, who has written for Rolling Stone, chronicles Wenner's fawning over Mick Jagger and aborted attempt to start, with Jagger, a British edition of Rolling Stone; Keith Richards describes Wenner and Jagger as "very guarded creatures," but wonders if "there's anything worth guarding." Hagan has provided an entertaining insider's history of a legendary magazine. (Oct.) © Copyright PWxyz, LLC. All rights reserved.

Hagan, New York and Rolling Stone contributor, wrote this biography at Wenner's request. Hagan had access to 500 boxes of personal papers and Wenner himself; he conducted 240-plus interviews. In sordid detail, Hagan covers Wenner's youth through his co-founding of Rolling Stone and his publisher/editor role thereafter. Hagan emphasizes Wenner's betrayals and narrow-mindedness in his take on, e.g., MLK's murder and his limited interest in punk and black artists. Hagan does praise Wenner's ability to attract talent (e.g., Hunter S. Thompson, Tom Wolfe) and in-depth coverage of, e.g., politics and Altamont. Hagan examines the decline of Rolling Stone from the late 1970s onward. Two earlier works, Robert Anson's Gone Crazy and Back Again (CH Sept '81 80-5448) and Robert Draper's Rolling Stone Magazine (Doubleday, 1990), paint similar pictures. What's new in this book is coverage of Wenner's homosexuality and a plethora of anecdotes, especially about sex and drugs. Hagan devotes just 10 percent of the book's 511 pages to covering 1990-2017 (with primary emphasis on the serious fact-checking lapse of the debunked UVA story "A Rape on Campus"). He concludes by comparing Wenner ("a pioneer of the age of the narcissism") to Trump. Summing Up: Recommended. All readership levels. --Robert A. Aken, University of Kentucky

*Starred Review* The first issue of Rolling Stone appeared in November 1967. Its founder was an ambitious kid whose goal in life was to become bigger and more important than Hugh Hefner: specifically, to become the Henry Luce (the founder of Time) for the counterculture. Wenner dared to take rock seriously (Rolling Stone popularized rock criticism) while also reinventing the idea of celebrity and fame around youth culture. He built up a network of important writers and photographers and published articles that covered the movers and shakers of pop culture and politics. It was a potent and popular mix, and it made Wenner, according to Hagan, the most important magazine editor in America in the 1970s. Anecdotes about musicians, including Lennon, Springsteen, and Jagger, among others, abound as well as stories involving some of the magazine's finest writers and photographers, including Hunter S. Thompson, Ben Fong-Torres, Cameron Crowe, Tom Wolfe, Richard Avedon, and Annie Leibovitz. Drawing from more than 100 hours of conversation with Wenner as well as interviews with musicians, writers, publishers, friends, lovers, and past and present employees of the magazine, Hagan has fashioned a fascinating biography of a controversial figure and the iconic publication he started.--Sawyers, June Copyright 2017 Booklist

The definitive biography of Rolling Stone founder Jann Wenner (b. 1946).Much like its spiritual cousin Saturday Night Live, Rolling Stone magazine has been a murderers' row of talent for decades, from the groundbreaking Lester Bangs to the gonzo engine of Hunter S. Thompson to political wunderkind Matt Taibbi. Here, former Rolling Stone contributing editor Hagan provides the most complete portrait ever of the man who has firmly gripped the magazine's helm the whole time, a man whose thumbprint on the American culture was matched only by a vacillating stew of ego and insecurity. For fans, newbies, and journalism junkies alike, the iconic stories are heree.g., Patti Hearst's Stockholm syndrome, the assassination of John Lennon, and the combative, brotherly bond between Wenner and Thompson in the latter's heyday (Wenner's response to his first meeting with Hunter is priceless: "I know I'm supposed to be the youth representative in the culture, but what the fuck is that?"). The author also explores the heavily drug-fueled work ethic among Wenner and contemporaries like Annie Leibovitz, Wenner's infamously combative marriage, and his long, painful struggle with his sexuality. To his credit, Hagan doesn't trade on his access to his subject's celebrity friends; when Mick Jagger or Michael Douglas pop up in the narrative, it's because they're substantive eyewitnesses to the scene at the time. Working with his subject's full consent and participation, the author manages to create a far deeper portrait than many readers will expect. In capturing Wenner's legend, Hagan creates a moving portrayal of a complicated, brilliant, flawed man who genuinely moved the needle on American culture. "He was the fame maker but also the flame keeper," Hagan writes of Wenner's evolution after Lennon's death. "The success and power of Rolling Stone made him the de facto architect of rock's cosmology, but it was his attention to the legends that made him the indispensable man." An engaging doorstop of a biography and a lasting legacy for the keeper of rock-'n'-roll's watchtower. Copyright Kirkus Reviews, used with permission.
More book reviews at iDreamBooks.com