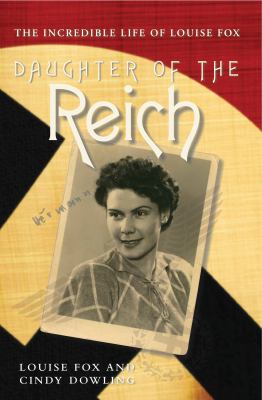 Daughter of the Reich : the incredible life of Louise Fox / Louise Fox and Cindy Dowling.

This is a story of an ordinary girl from Germany who became caught up in the inner workings of the Nazi war machine. Louise Fox had grown up while the Nazis steadily took full control of the country and like so many of her age group Nazism was considered to be just normal. As a teenager she was first involved in the effort to provide anti-aircraft equipment for the Luftwaffe and to kit out Rommel for the North African campaign. She was a hard worker and was promoted to the rank of captain in the Luftwaffe's supreme command headquarters in Potsdam, near Berlin. She caught Herman Goering's eye when he awarded her a medal for bravery in the capture of a downed British airman, and was sent to work in the Air Ministry making appointments and assisting Goering. As the war intensified on two fronts Louise was transferred back to Potsdam to manage the huge task of securing appropriate ammunition supplies for the Luftwaffe, a job she held for the rest of the war.She married an airman who three weeks later was killed in action. Louise was posted with her colleagues to the Eastern front and escaped with them all in Hitler's 'strategic retreat' ahead of the Red Army. In the last few months of the war she was captured and imprisoned by the Americans. She escaped and began an event-filled 1,000-kilometre hike to the safety of relatives. Life was difficult after the war and Louise entered the black market and was imprisoned. She eventually found a pen pal in Tasmania and much to the amazement of friends migrated there - selling Volkswagens to make a living. She still lives in Australia.Goering was the Deputy Vice Chancellor of the Third Reich. Louise was his secretary.