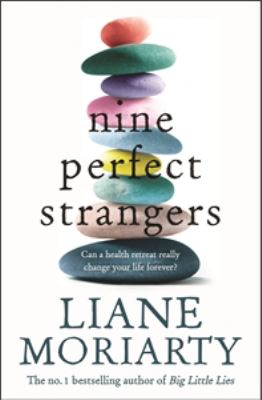 DDC classification: 823/.92 | A823.4 Summary: The retreat at health and wellness resort Tranquillum House promises total transformation. Nine stressed city dwellers are keen to drop their literal and mental baggage, and absorb the meditative ambience while enjoying their hot stone massages. Watching over them is the resort's director, a woman on a mission to reinvigorate their tired minds and bodies. These nine perfect strangers have no idea what is about to hit them.
Tags from this library: No tags from this library for this title. Log in to add tags.
Total holds: 0

From the no. 1 New York Times bestselling author of The Husband's Secret and Big Little Lies. The retreat at health and wellness resort Tranquillum House promises total transformation. Nine stressed city dwellers are keen to drop their literal and mental baggage, and absorb the meditative ambience while enjoying their hot stone massages. Watching over them is the resort's director, a woman on a mission to reinvigorate their tired bodies and minds. These nine perfect strangers have no idea what is about to hit them.With her wit, compassion and uncanny understanding of human behaviour, Liane Moriarty explores the depth of connection that can be formed when people are thrown together in... unconventional circumstances. LONGLISTED FOR THE ABIA GENERAL FICTION BOOK OF THE YEAR 2019 LONGLISTED FOR THE INDIE BOOK AWARD FOR FICTION 2019 PRAISE FOR NINE PERFECT STRANGERS"She is...both hugely popular yet subversive...Nine Perfect Strangers shows Moriarty still taking risks with fiction...weighty issues writ with humour and a light touch. The hammer is still in the handbag, ready to smash a glass window or two." Lucy Sussex, The Australian "Welcome to Tranquillum House where those Perfect Strangers ... have come to sort out their lives ...This gives Moriarty the opportunity to do what she does best, write about the human condition and connections that bind us all, with wicked humour, empathy and compassion - and a little bit of danger thrown in." Frances Whiting, Courier MailPRAISE FOR LIANE MORIARTY"One of the few writers I'll drop anything for. Her books are wise, honest, beautifully observed..." Jojo Moyes"Moriarty is a deft storyteller who creates believable, relatable characters." Washington Post"Moriarty is brilliant at her craft, all the time cranking up the suspense." The Age"funny and scary" Stephen King"Sharply intelligent" Entertainment Weekly"Mistress of the razor-sharp observation" Kate Morton

The retreat at health and wellness resort Tranquillum House promises total transformation. Nine stressed city dwellers are keen to drop their literal and mental baggage, and absorb the meditative ambience while enjoying their hot stone massages. Watching over them is the resort's director, a woman on a mission to reinvigorate their tired minds and bodies. These nine perfect strangers have no idea what is about to hit them.

Despite a frustrating check-in experience leading to doubts over whether to stay at Tranquillum House or return home, romance writer Frances Welty is intrigued enough by the remote Australian health resort's owner, staff, and eight fellow guests to stay. Frances ruminates upon the reason(s) the guests, owner, and staff have for attending (and holding) the ten-day retreat. The person who intrigues her the most is the strange and charismatic owner of the resort, but Frances isn't sure whether to put aside her doubts and immerse herself in everything Tranquillum House has to offer, or run while she still can? The book is long, but Moriarty (Big Little Lies) effectively places the listener in Frances's mind. Caroline Lee's nicely paced, clear, distinct speech and British accent suits this Australia-set novel. Lee does an admirable job of differentiating among all characters' voices-particularly male voices and the owner's Russian accent. Verdict Loaded with suspenseful psychological thrills, comedy, and dark humor, this genre-crossing work will appeal to a wide range of listeners as it is a little bit Maeve Binchy, Dean Koontz, and Lisa Scottoline. ["The story drags a bit in the middle, but the last third is on fire, with intense issues and a roller-coaster plot that will leave readers breathless": LJ 11/15/18 review of the Flatiron: Macmillan hc.]-Laurie Selwyn, formerly with Grayson Cty. Law Lib., Sherman, TX © Copyright 2019. Library Journals LLC, a wholly owned subsidiary of Media Source, Inc. No redistribution permitted.

Send a motley crew of hurting but comfortably heeled Aussies to a secluded resort for a pricey 10-day "Mind and Body Total Transformation Retreat" and what happens? In this cannily plotted, continually surprising, and frequently funny page-turner from bestseller Moriarty (Big Little Lies), nothing like the restorative reset they're anticipating. The nine guests at Tranquillum House include middle-aged romance writer Frances Welty, her normal spunkiness shaken by recent personal and professional setbacks, and 20-year-old Zoe Marconi, there with her parents on the anniversary of the family tragedy that shattered their lives. What they haven't reckoned on is Tanquillum House's messianic but precariously stable director, whose secret agenda could be dangerous to their health. It would be unsporting to disclose more about Moriarty's largely endearing cast, since her progressive revelations about them contribute so much toward making this such a deeply satisfying thriller. Moriarty delivers yet another surefire winner. Author tour. Agent: Faye Bender, Faye Bender Literary. (Nov.) © Copyright PWxyz, LLC. All rights reserved.

Moriarty (Truly Madly Guilty, 2016) continues her exploration of characters with comfortable lives who can't help but make themselves uncomfortable. This time she takes on nine guests at a wellness retreat: a romance writer who is fading in popularity; a young married couple; a very handsome lawyer; a teacher, his wife, and their adult daughter; a divorced mother; and a familiar-looking middle-aged man. Tranquillum House, a nineteenth-century mansion in the middle of nowhere in Australia, has been converted to a well-guarded sanctuary, with yoga rooms, fruit smoothies, and an aggressively beautiful leader. Masha Dmitrichenko, emboldened by past success, plans to initiate this group into her new protocol, one that will shake up the wellness world. It's hard to share details, since each reveal is a delicious surprise. Like she did in Big Little Lies (2014), Moriarty uses several narrators to tell the whole tale, and though some story lines get more attention than others, readers will find themselves flipping through the nearly 500 pages. But even at that length, Nine Perfect Strangers is so well written and slyly constructed that it won't feel like enough. HIGH-DEMAND BACKSTORY: Moriarty's considerable fan base has waited two long years for this one, so be prepared.--Susan Maguire Copyright 2018 Booklist

Nine people gather at a luxurious health resort in the Australian bushland. Will they have sex, fall in love, get killed, or maybe just lose weight?Moriarty (Truly Madly Guilty, 2014, etc.) is known for darkly humorous novels set in the suburbs of Sydneythough her most famous book, Big Little Lies (2014), has been transported to Monterey, California, by Reese Witherspoon's HBO series. Her new novel moves away from the lives of prosperous parents to introduce a more eclectic group of people who've signed up for a 10-day retreat at Tranquillium House, a remote spa run by the messianic Masha, "an extraordinary-looking woman. A supermodel. An Olympic athlete. At least six feet tall, with corpse-like white skin and green eyes so striking and huge they were almost alien-like." This was the moment when the guests should probably have fled, but they all decided to stay (perhaps because their hefty payments were nonrefundable?). The book's title is slightly misleading, since not all the guests are strangers to each other. There are two family groups: Ben and Jessica Chandler, a young couple whose relationship broke down after they won the lottery, and the Marconis, Napolean and Heather and their 20-year-old daughter, Zoe, who are trying to recover after the death of Zoe's twin brother, Zach. Carmel Schneider is a divorced housewife who wants to get her mojo back, Lars Lee is an abnormally handsome divorce lawyer who's addicted to spas, and Tony Hogburn is a former professional footballer who wants to get back into shape. Though all these people have their own chapters, the main character is Frances Welty, a romance writer who needs a pick-me-up after having had her latest novel rejected and having been taken in by an internet scamshe fell in love with a man she met on Facebook and sent money to help his (nonexistent) son, who'd been in a (nonexistent) car accident. How humiliating for a writer to fall for a fictional person, Frances thinks, in her characteristically wry way. When the guests arrive, they're given blood tests (why?) and told they're going to start off with a five-day "noble silence" in which they're not even supposed to make eye contact with each other. As you can imagine, something fishy is going on, and while Moriarty displays her usual humor and Frances in particular is an appealing character, it's all a bit ridiculous. Fun to read, as always with Moriarty's books, but try not to think about it or it will stop making sense. Copyright Kirkus Reviews, used with permission.
More book reviews at iDreamBooks.com