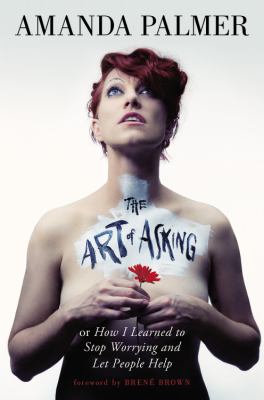 The art of asking, or, How I learned to stop worrying and let people help / Amanda Palmer ; foreword by Brené Brown.

DDC classification: 782.42164 PAL Summary: The lead singer of The Dresden Dolls reveals how she has used the power of social networking to meet basic survival needs, make friends, and strengthen communities by raising awareness and funds.
Tags from this library: No tags from this library for this title. Log in to add tags.
Fiction notes: Click to open in new window

Rock star, crowdfunding pioneer, and TED speaker Amanda Palmer knows all about asking. Performing as a living statue in a wedding dress, she wordlessly asked thousands of passersby for their dollars. When she became a singer, songwriter, and musician, she was not afraid to ask her audience to support her as she surfed the crowd (and slept on their couches while touring). And when she left her record label to strike out on her own, she asked her fans to support her in making an album, leading to the world's most successful music Kickstarter.

Even while Amanda is both celebrated and attacked for her fearlessness in asking for help, she finds that there are important things she cannot ask for-as a musician, as a friend, and as a wife. She learns that she isn't alone in this, that so many people are afraid to ask for help, and it paralyzes their lives and relationships. In this groundbreaking book, she explores these barriers in her own life and in the lives of those around her, and discovers the emotional, philosophical, and practical aspects of The Art of Asking.

Part manifesto, part revelation, this is the story of an artist struggling with the new rules of exchange in the twenty-first century, both on and off the Internet. The Art of Asking will inspire readers to rethink their own ideas about asking, giving, art, and love.

The lead singer of The Dresden Dolls reveals how she has used the power of social networking to meet basic survival needs, make friends, and strengthen communities by raising awareness and funds.

Singer-songwriters are by trade confessional artists. Palmer, once a member of the Dresden Dolls, further invades the fourth wall with this book, which expands her million-hit TED Talk with insights as to why it's hard to ask for help and how this reluctance can freeze-frame one's life and relationships. The writing can be nakedly emotional (complete with musical interludes), but her narration of the book avoids the bathetic, elides mawkish, and motors deep into the practicalities of an interconnected, inter-dependent life, both on a personal and professional level. VERDICT Recommended for fans of the author and anyone interested in getting help for one's creative pursuits. [See a Q&A with the author on this page.]-Kelly Sinclair, Temple P.L., TX © Copyright 2015. Library Journals LLC, a wholly owned subsidiary of Media Source, Inc. No redistribution permitted.

Palmer, well-known in the alternative music scene for her work with the Dresden Dolls and her groundbreaking use of social media and crowdsource funding to support her creative endeavors, offers a fusion of autobiography and self-help, presenting a message of empowerment for those afraid to ask others for help in furthering personal and professional goals. Palmer in particular has had to find peace with accepting various forms of support from her financially successful spouse, the bestselling author Neil Gaiman. The narrative is interspersed with related songs from Palmer's own repertoire and musical appearances by singer-songwriter and friend Ben Folds. Palmer's transitions between speaking and singing flow effectively, and she provides a warm and quirky conversational style. Granted, some listeners who are looking primarily for personal development may not take to the artistic facets of the recording, but Palmer's talent cannot be denied. The renderings of her famous husband's calm and collected British delivery are especially entertaining. A Grand Central hardcover. (Nov.) © Copyright PWxyz, LLC. All rights reserved.
More book reviews at iDreamBooks.com