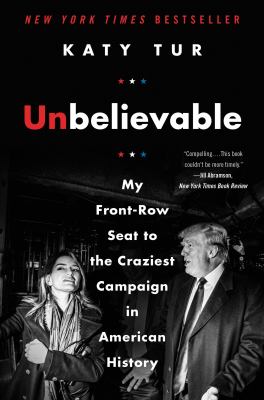 Unbelievable : my front-row seat to the craziest campaign in American history / Katy Tur.

DDC classification: 324.973/090512 | 324.973 Summary: The NBC news correspondent assigned to cover the Trump campaign for the 2016 presidential election shares her perspective on witnessing Trump's unexpected campaign successes.
Tags from this library: No tags from this library for this title. Log in to add tags.
Fiction notes: Click to open in new window

Katy Tur lived out of a suitcase for a year and a half, following Trump around the country, powered by packets of peanut butter and kept clean with dry shampoo. She visited forty states with the candidate, made more than 3,800 live television reports, and tried to endure a gazillion loops of Elton John's "Tiny Dancer"--a Trump rally playlist staple.

From day 1 to day 500, Tur documented Trump's inconsistencies, fact-checked his falsities, and called him out on his lies. In return, Trump repeatedly singled Tur out. He tried to charm her, intimidate her, and shame her. At one point, he got a crowd so riled up against Tur, Secret Service agents had to walk her to her car.

None of it worked. Facts are stubborn. So was Tur. She was part of the first women-led politics team in the history of network news. The Boys on the Bus became the Girls on the Plane. But the circus remained. Through all the long nights, wild scoops, naked chauvinism, dodgy staffers, and fevered debates, no one had a better view than Tur.

Unbelievable is her darkly comic, fascinatingly bizarre, and often scary story of how America sent a former reality show host to the White House. It's also the story of what it was like for Tur to be there as it happened, inside a no-rules world where reporters were spat on, demeaned, and discredited. Tur was a foreign correspondent who came home to her most foreign story of all. Unbelievable is a must-read for anyone who still wakes up and wonders, Is this real life?

The NBC news correspondent assigned to cover the Trump campaign for the 2016 presidential election shares her perspective on witnessing Trump's unexpected campaign successes.

NBC News political journalist Katy Tur offers an entertaining personal account of the nearly two years she spent covering Donald Trump's rise to the presidency, "the most unlikely, exciting, ugly, trying, and all-around bizarre campaign in American history." Trump's presidential run was a surreal experience for many Americans, but for Tur it was also life-changing: she was a relatively unknown London-based foreign correspondent enjoying quiet weekends in Paris and a self-described "political novice" when she got the call to go on the road with Trump in the spring of 2015. "Six weeks, tops," her bosses told her. Overnight, Tur's life became a blur of planes, cars, buses, hotel rooms, dry shampoo, bad food, rowdy and often disturbing campaign rallies, and headline-grabbing tweet storms. Some 500 grueling days later, Trump was president-and Tur had emerged as a battle-tested fixture of the NBC News political team. She was a frequent target of Trump's, who famously nicknamed her "Little Katy" and whipped his crowds into such an antimedia frenzy that she occasionally required a security detail. While Tur recalls many of the campaign's unusual moments (Trump defending his penis size in a presidential debate; his hawking of steaks and bottled water at a press conference; the Access Hollywood tape) Tur's narrative is light on political analysis, and it mostly avoids the central question pundits will be exploring for years to come: how did Trump actually win? But Tur's brisk behind-the-scenes account humanizes the press corps, illuminates life on the campaign trail, and delivers on its promise: "I won't pretend to explain it," Tur writes, but "I will tell you what I saw." (Sept.) © Copyright PWxyz, LLC. All rights reserved.

NBC reporter Tur was the road warrior who followed Donald's Trump campaign from beginning to end. Those who watched her reports know that little Katy was sometimes called out by Trump at rallies, where she was penned in with the rest of thepress corps and insulted by the crowd. In her introduction, Tur says about the Trump phenomenon, I won't try to explain. I will just tell you what I saw. And this becomes frustratingly true, as the book goes on. This is a travelogue through Trump '16, and it only covers what Tur covered herself. There's very little about policy issues, Hillary Clinton, even behind-the-scenes campaign backstabbing. What the book does well, however, is capture the blur of a campaign and the buffeting of journalists' personal lives (though, as Tur, who broke up with her boyfriend and left London for the chance to follow the Trump train, understands, a campaign can be a career maker). Tucked within the well-trod territory is the book's strongest element: the disturbing on-site reports of how deep the hatred ran at the rallies. Tur communicates how shocking it was to see ordinary people become unleashed in crowds, calling Clinton the c-word, or even screaming assassinate the bitch. She writes about what it feels like to need private security and to have a Trump supporter spit in her face, and that resonates powerfully. A thin but very personal first draft of history.--Cooper, Ilene Copyright 2017 Booklist

One of Donald Trump's favorite media targets tells how she attained that distinction in this spry look at the 2016 campaign.NBC News correspondent Tur covered the presidential campaign from the very start, with Trump in her sights for more than 500 grueling days. At the beginning, she writes, she informed the disbelieving hosts of Today that, even after Trump's opening remark that "when Mexico sends its people, they're not sending their best," he was polling strongly in bellwether New Hampshire. "Trump wasn't part of anyone's plan," she writes, adding, "for that matter, neither was I." However, Trump managed to tap into a deep well of resentment and anger among disaffected voters who were content to trade in old notions of truth and decency for Trump's wild ride. Trump's own encounters with Tur were just as resentful and angry: he complained that she wouldn't look at him and was distorting words she was quoting verbatim, and she had a special knack for upsetting him. "His rage didn't register in the moment," she writes in a post-mortem of an early encounter. "I thought it was all part of his shtick. The reality show star. But watching his face on-screen, it's clear Trump isn't playing." Still, praise came from the author's colleagues, and even, on occasion, from Trump himself, who grudgingly allowed that Tur was better than most reporters. In Tennessee, "he tried to introduce me to a crowda hand on my shoulder like I was his wife." Trump's anger, page after page of it, is discomfiting, and Tur's reactions to it seem to verge on symptoms of PTSD. Even so, her own back-of-the-envelope analyses are borne out by subsequent events, as when she writes, "Trump is crude, and in his halo of crudeness other people get to be crude as well." A thoughtful account of covering what the author rightly calls "the most unlikely, exciting, ugly, trying, and all-around bizarre campaign in American history." Copyright Kirkus Reviews, used with permission.
More book reviews at iDreamBooks.com