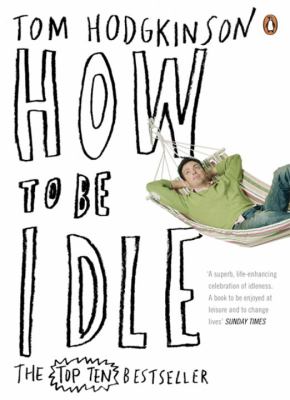 How to be idle / Tom Hodgkinson.

How to be Idle is Tom Hodgkinson's entertaining guide to reclaiming your right to be idle.
As Oscar Wilde said, doing nothing is hard work. The Protestant work ethic has most of us in its thrall, and the idlers of this world have the odds stacked against them. But here, at last, is a book that can help. From Tom Hodgkinson, editor of the Idler , comes How to be Idle , an antidote to the work-obsessed culture which puts so many obstacles between ourselves and our dreams. Hodgkinson presents us with a laid-back argument for a new contract between routine and chaos, an argument for experiencing life to the full and living in the moment. Ranging across a host of issues that may affect the modern idler - sleep, the world of work, pleasure and hedonism, relationships, bohemian living, revolution - he draws on the writings of such well-known apologists for idleness as Dr Johnson, Oscar Wilde, Robert Louis Stevenson and Nietzsche. His message is clear- take control of your life and reclaim your right to be idle.
'Well written, funny and with a scholarly knowledge of the literature of laziness, it is both a book to be enjoyed at leisure and to change lives' Sunday Times
'In his life and in this book the author is 100 per cent on the side of the angels' Literary Review
'The book is so stuffed with wisdom and so stuffed with good jokes that I raced through it like a speed freak' Independent on Sunday
Tom Hodgkinson is the founder and editor of The Idler and the author of How to be Idle , How to be Free , The Idle Parent and Brave Old World . In spring 2011 he founded The Idler Academy in London, a bookshop, coffeehouse and cultural centre which hosts literary events and offers courses in academic and practical subjects - from Latin to embroidery. Its motto is 'Liberty through Education'.
Find out more at www.idler.co.uk.

In these stress-filled times of dashing from one meeting to another and often running behind, we should all give ourselves the gift of reading this debut by the founding editor of Idler magazine. Arguing that the modern work ethic enslaves us all and that joy and wisdom have been replaced by work and worry, Hodgkinson insists that we can create our own paradise by defending our right to be lazy. Quoting literature, poetry, and philosophy, he offers a humorous peek at the worth and wonders of slowing down. The chapters are cunningly arranged according to the hours of the day, illustrating that every minute offers opportunities for idleness. Hodgkinson revels in the pleasures of sleeping in, taking leisurely lunches, napping, and other such pursuits. Artfully combining British and American perspectives, this book promises to be just as big a hit here as it was in the United Kingdom. Recommended for most public libraries.-Wendy Lee, Marshall-Lyon Cty. Lib., MN (c) Copyright 2010. Library Journals LLC, a wholly owned subsidiary of Media Source, Inc. No redistribution permitted.

When your alarm clock jolts you awake in the morning, do you wish you could just lie in bed, read a book, sip a cup of tea and be idle all day? Hodgkinson, founder of the Idler magazine, does. And in this book he presents 24 essays defending life's idle pleasures, which are, he says, vilified by our modern society. He meditates on sleeping in, fishing, smoking and drinking, and even waxes poetic about the hangover. The whole book is soaked with nostalgia for the turn-of-the-century English gentleman's lifestyle; Hodgkinson defends his arguments by quoting Jerome K. Jerome, G.K. Chesterton and, of course, that icon of British foppery, Oscar Wilde. Although billed as tongue-in-cheek witticisms about the idle life, the book fails to maintain the comic tone. In his chapter on the evils of the 9-to-5 job ("wage slavery," as the author calls it), Hodgkinson cites Heinrich Himmler as a spokesperson for the defense of work, tacitly comparing shuffling papers in a cubicle for 40 hours a week to the horrors of Auschwitz. The book gives tantalizing anthropological insights into society's views on those lazy habits that the author so enjoys, but the viewpoint is so antiquated and condescending toward the poor slobs who must actually go to work every day that readers will often find themselves staring aghast at the page. B&w line illus. Agent, Cat Ledger. (May 15) (c) Copyright PWxyz, LLC. All rights reserved

An intelligent slugabed, bemoaning the modern world's love affair with productivity, presents 24 meditations on the art of being idle, one for each hour of the day. Hodgkinson, co-publisher of the British magazine The Idler, begins at 8 a.m. with a discussion of the alarm clock and the horrors of waking up in general. (Here, he makes the first of many references to Victorian idler and humorist Jerome K. Jerome, whose essay "On Being Idle" appeared in 1889.) Other topics the author contemplates as the day goes by are "Sleeping In" (John Lennon and Yoko Ono's week in bed), "The Ramble," "The First Drink of the Day" and so on. "The Death of Lunch" is bemoaned. "Smoking" is celebrated. "The Pub" is praised. "Time for Tea" cites a lovely 16th-century Chinese poem that lists occasions on which to drink England's favorite beverage: "Before a bright window and a clean desk. / With charming friends and slender concubines." Each piece addresses the delights of a particular aspect of doing nothing, its literary and social precedents, and the regrettable reasons for its fall from favor. Capitalism and the Industrial Revolution both come in for censure as chief villains; Barbara Ehrenreich's Nickel and Dimed and E.P. Thompson's The Making of the English Working Class are cited, among countless others. So many others, in fact, that it is nearly impossible to believe the author is a true adherent of his creed. A great amount of (gasp) work must have gone in to researching this paean to the pleasures of doing little; the bibliography alone comprises nearly 150 items. Indeed, with all of these literary citations and closely argued points, How to be Idle becomes rather heavy going after three or four sections. No matter: no idler worth his salt will read it in a single sitting--there's too much fishing, tea drinking and napping to be done. Charming, as all idlers should be. Copyright ©Kirkus Reviews, used with permission.
More book reviews at iDreamBooks.com