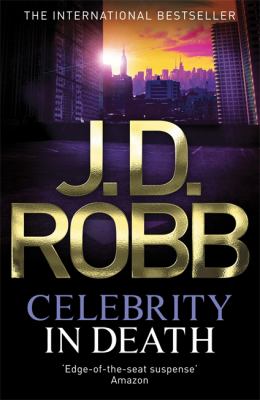 Celebrity in death / by J.D. Robb.

Genre/Form: Detective and mystery fiction.DDC classification: 813.6 Summary: Lieutenant Eve Dallas is no party girl, but she's managing to have a reasonably good time at the celebrity-packed bash celebrating The Icove Agenda, a film based on one of her famous cases. It's a little spooky seeing the actress playing her, who looks almost like her long-lost twin. Not as unsettling, though, as seeing the actress who plays Peabody drowned in the lap pool on the roof of the director's luxury building. Now, she must step into the role she was born to play: cop.
Tags from this library: No tags from this library for this title. Log in to add tags.
Fiction notes: Click to open in new window

'We've got a corpse that looks like one of the investigators, a houseful of Hollywood and a media machine that's going to eat it like gooey chocolate.'

Lieutenant Eve Dallas is panicking - and she's not at a crime scene. Forced to attend a celeb-packed party for a new movie based on her most famous case, she is surrounded by actors who look like everyone in her life. Just as the end is in sight, brutal reality crashes through the sparkly façade.

There's been a murder.

The obnoxious actress playing Eve's partner, Peabody, has been found face down in the pool. As Eve hastily interviews the guests, it's hard to find anyone who didn't have a motive for the crime. But with a murdered Personal Investigator, a missing tape recording and a hugely expensive movie in the mix, Eve must fight to keep a clear head and stop a calculated killer.

Lieutenant Eve Dallas is no party girl, but she's managing to have a reasonably good time at the celebrity-packed bash celebrating The Icove Agenda, a film based on one of her famous cases. It's a little spooky seeing the actress playing her, who looks almost like her long-lost twin. Not as unsettling, though, as seeing the actress who plays Peabody drowned in the lap pool on the roof of the director's luxury building. Now, she must step into the role she was born to play: cop.

Murder, sex, and blackmail all figure in bestseller Robb's smart, well-crafted 35th Eve Dallas novel set in mid-21st-century New York City (after 2011's Dallas to New York). Lt. Eve Dallas feels a little uneasy attending a party at Hollywood mogul Mason Roundtree's Park Avenue townhouse to celebrate The Icove Agenda, the movie adaptation of a high-profile murder case solved by Eve and her police cohorts. Eve has even more cause for concern after 28-year-old actress K.T. Harris, who makes a drunken scene at dinner, later turns up dead in the lap pool on the townhouse roof. Could K.T. have fallen into the pool by accident? Or was it foul play? K.T. had plenty of enemies, including Marlo Durn, who plays Eve in the film and could pass for Eve's sister: "I hated her. She was a sick, bitter bully." Eve's wealthy and charming husband, Rourke, lends support while Eve and Detective Peabody pursue yet another gripping case. Agent: Amy Berkower. (Feb.) (c) Copyright PWxyz, LLC. All rights reserved.

NYPD lieutenant Eve Dallas doesn't do glitz or glam, but she has no choice when Hollywood director Mason Roundtree and his wife, Connie Burkette, issue an invitation to dine with the cast of The Icove Agenda. Based on one of Eve's earlier cases, the movie is just wrapping up production, and everyone wants face time with the real Lieutenant Dallas. Everyone except actress K. T. Harris, who plays the part of Eve's partner, Delia Peabody, onscreen but in real life is just as bitchy to Eve as she is to everyone else. So when K. T.'s body is found floating in the Roundtree and Burkette's penthouse lap pool, it really isn't that big of a surprise. The real challenge for Eve will be narrowing down her list of suspects since practically everyone at the dinner party had at least one motive for murder. Readers count on Robb to deliver the goods, and her thirty-fourth (!) Eve Dallas book will not disappoint. The plot is cleverly conceived, cinematically riveting, and sexily charming, and Eve is her usual no-nonsense self.--Charles, John Copyright 2010 Booklist

Treachery in Death, 2011, etc.) to Joel Steinburger's Big Bang Productions, the cameras are rolling on Marlo Durn, playing Eve; K.T. Harris, playing Peabody; and Julian Cross, playing Eve's husband Roarke, the world's sexiest millionaire. But the onscreen mayhem is topped by the news that K.T. has stepped out of a dinner party bringing the lead actresses together with the two detectives they're playing, gone upstairs for a smoke and ended up dead in a rooftop swimming pool. K.T. is soon unmasked as a conniving blackmailer who'll be missed mainly by her bewildered parents back home. With so many potential victims of her craft--director Mason Roundtree, his wife Connie Burkette, publicist Valerie Xaviar, Marlo's lover, actor Matthew Zank--literally in the same room, how can Eve and Peabody possibly spot a killer who's already moved on by eliminating a potential witness? Only by getting a hunch to dig deeper into one suspect's background and find a trail of homicide leading back from the future to the early 2020s. Their discovery leads to a long, long wrap-up--leaning on possible accomplices, inducing one of them to wear a wire, trapping the killer into another attempted murder, parading the array of evidence after a high-profile arrest--all of it eminently routine. Robb does all too little with the promising notion of doubling the cops with the actresses who play them, or indeed with any other elements of this futuristic, but surprisingly retro, closed-circle game of Hollywood squares.]] Copyright Kirkus Reviews, used with permission.
More book reviews at iDreamBooks.com