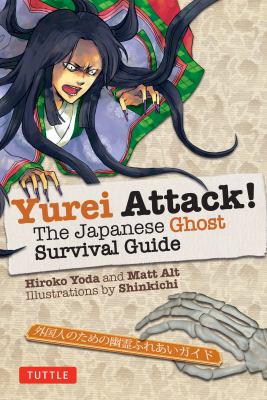 DDC classification: 133.10952 Summary: Provides information and history on Japanese ghosts and hauntings, including Lady Rokugo, Emperor Sutoku, and the Okiku doll.
Tags from this library: No tags from this library for this title. Log in to add tags.

Yurei Attack! is a nightmare-inducing one-stop guide to Japan's traditional ghosts and spirits.

Surviving encounters with angry ghosts and sexy specters. Haunted places. Dangerous games and how to play them. And more importantly, a guided tour of what awaits in the world of the dead.

Yurei is the Japanese word for "ghost." It's as simple as that. They are the souls of dead people, unable--or unwilling--to shuffle off this mortal coil. Yurei are many things, but "friendly" isn't the first word that comes to mind. Not every yurei is dangerous, but they are all driven by emotions so uncontrollably powerful that they have taken on a life of their own: rage, sadness, devotion, a desire for revenge, or even the firm belief that they are still alive.

This book, the third in the authors' bestselling Attack! series, after Yokai Attack! and Ninja Attack! gives detailed information on 39 of the creepiest yurei stalking Japan, along with detailed histories and defensive tactics should you have the misfortune to encounter one.

Japanese ghosts include: Oiwa, The Horror of Yotsuya Otsuyu, The Tale of the Peony Lantern The Lady Rokujo, The Tale of Genji Isora, Tales of Moonlight and Rain Orui, The Depths of Kasane
Book 3 of 3 in the Yokai Attack! series. Others include Ninja Attack! and Yokai Attack!.

Provides information and history on Japanese ghosts and hauntings, including Lady Rokugo, Emperor Sutoku, and the Okiku doll.

Gr 8 Up-For anyone who's ever wondered how they would fare against a kappa, kitsune, or the dreaded kuchisake onna, these lively volumes are structured as handbooks for surviving encounters with Japan's legendary monsters, spirits, assassins, and spies. Ninja Attack! dispels stereotypes while filling in the real history of these infamous spies and assassins. Yokai Attack! catalogs demons and monsters, and Yurei Attack! focuses on gruesome ghost stories. Action-packed tales of vengeful spirits and shape-shifting badgers are accompanied by historical background, regional origins, and related trivia, while profiles of well-known ninja are interspersed with details of their daily lives, such as housing and food. Each book includes appendixes with recommended books, movies, and websites for further research. Gleefully gory manga-style illustrations in full color add to the creep-out factor of the texts, and eye-catching layouts with photographs and reproductions of woodblock prints make for a visually appealing reading experience. Japanese names and words are seamlessly integrated into the texts, with Japanese characters appearing alongside English translations and pronunciation guides. An engaging blend of information and entertainment, this trilogy is a fantastic reference for budding manga artists who want to incorporate Japanese legends into their own stories, or anyone who simply enjoys a good scare.-Allison Tran, Mission Viejo Library, CA (c) Copyright 2013. Library Journals LLC, a wholly owned subsidiary of Media Source, Inc. No redistribution permitted.
More book reviews at iDreamBooks.com