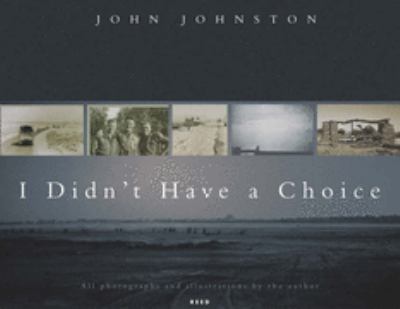 I didn't have a choice / John Johnston.

John Johnston makes no bones about the fact that he was 'an ordinary soldier' during his time in the NZ Army in the Second World War. He says his book is 'about soldiers, but not about fighting...', it is about 'the ordinary, everyday soldier, and there were thousands of them, just like me. It's about how we spent our spare time, what we ate, where we slept. It's about our thoughts and our longings and what we endured. We didn't have a choice.' Pre-war John was a professional photographer, and it only figures that he carried his passion to battle. This images is this stunning book are the images he took as he travelled through Egypt and the surrounding areas. Not only are there the amazing images that portray his time as 'an ordinary solider', there is the amazing story of how he was able to avoid censorship during the war by developing his images himself using his battledress as a darkroom John's images were put into storage when he returned from Egypt. When he began writing this book he knew he would need images to accompany his story.To his delight, and with a little help from modern technology, the images, in storage for 60 years, are able to be reproduced, resulting in this fascinating record of his 'ordinary' war days.

"An ordinary soldier's story of the Second World War"--Cover.