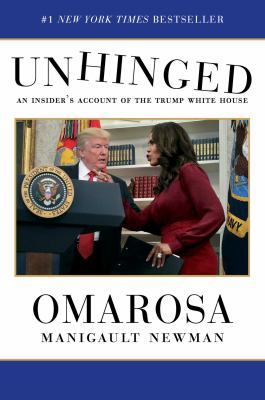 Genre/Form: Autobiographies.DDC classification: 973.933 | B Summary: Former Director of Communications for the Office of Public Liaison in the Trump administration, Omarosa Manigault Newman discusses how her personal and professional relationships with Donald Trump have changed from the time she was a contestant on "The Apprentice" to her public ousting from White House.
Tags from this library: No tags from this library for this title. Log in to add tags.
Fiction notes: Click to open in new window

The former Assistant to the President and Director of Communications for the Office of Public Liaison in the Trump White House provides an eye-opening look into the corruption and controversy of the current administration.

Few have been a member of Donald Trump's inner orbit longer than Omarosa Manigault Newman. Their relationship has spanned fifteen years--through four television shows, a presidential campaign, and a year by his side in the most chaotic, outrageous White House in history. But that relationship has come to a decisive and definitive end, and Omarosa is finally ready to share her side of the story in this explosive, jaw-dropping account.

A stunning tell-all and takedown from a strong, intelligent woman who took every name and number, Unhinged is a must-read for any concerned citizen.

Former Director of Communications for the Office of Public Liaison in the Trump administration, Omarosa Manigault Newman discusses how her personal and professional relationships with Donald Trump have changed from the time she was a contestant on "The Apprentice" to her public ousting from White House.

In this venomous tell-all, the Trump presidency resembles the reality show that birthed it. Newman recounts her journey from a 2004 turn on the Trump-hosted television competition The Apprentice-where, she candidly recounts, she crafted a provocative, troublemaking persona to succeed-to her work on his presidential campaign and 2017 stint in the White House Office of Public Liaison, where, as one of the administration's few African-American staffers, she struggled to spin his policies to women and minorities. She describes her gradual emergence from blind loyalty to the "cult" of "Trumpworld" into viewing the president as "a racist, a bigot and a misogynist" who is "just this side of functionally illiterate" and suffering "mental decline," which she blames for his tweets. Newman is similarly cutting about other administration figures like Kellyanne Conway ("a calculat[ing] swamp monster") and first daughter Ivanka, who, Newman alleges, manipulates Trump's purported quasi-incestuous infatuation with her. Few of these accusations are new; Newman's splashiest revelation is her unverified claim to have a tape of Trump using the n-word. (She has released tapes that confirm her account of her firing and contradict what Trump and White House Chief of Staff John Kelly said about it.) This entertaining, gossipy memoir of White House dysfunction will be catnip to scandal lovers. (Aug.) © Copyright PWxyz, LLC. All rights reserved.

Omarosa may call Donald Trump unhinged, but by her own admission, she was complicit in the antics of his administration. Although it's her disclosures about Trump that have made the headlines he didn't want to be left by himself at an African American church; he can't remember bullet points; he drinks eight Diet Cokes a day (the latter, Omarosa claims, leads to dementia) this book is in many ways more the story of someone who happily gives up her principles to pursue a greater public image. An Obama supporter who was active in Hillary Clinton's primary campaign, Omarosa was peeved when no call came from Hillary's team asking her to work in the general election. So, principles tossed, she threw in with Trump and, as she admits here, ignored what was going on around her when it came to the African American outreach she was charged with performing. In fact, she ignored most everything else going on around Trump, too. After the Access Hollywood tape dropped, for instance, she says, "But because of my blind spot, or my history with him, or just because I couldn't allow myself to believe it, I tried to rationalize it. Some combination of those words follows when she discusses nearly every disturbing Trump incident during her time in the administration. Even though she writes that Charlottesville was the last straw, she stayed on until fired by General John Kelly in December 2017. Readers can be forgiven if they have the impression that, without Kelly's push, she'd be there still. Like many books of this ilk, this one is likely to have a short shelf life hot at first and then quickly very cold. On the other hand, it's reported that Omarosa has taped 200 or so conversations with Trump, and when those are released, we'll be hearing more from her.--Ilene Cooper Copyright 2018 Booklist

The one-time reality TV contestant and player in an ongoing White House drama bares alland hints at more.According to Newman, there's a recording out there with the N-word spilling out of the mouth of the sitting president. "During production," she writes, "he was miked, and there is definitely an audio track." That she or some other former staffer hasn't brought forth such a thing, she suggests, is just a matter of time, but no matter. Here, the former Apprentice cast member dishes on Donald Trumpand just about everyone else in the White House in the last couple of years. A few are spared: Anthony Scaramucci, for instance, was "cocky and arrogantbut oddly likable," while Trump referred to Kellyanne Conway's contrarian husband as "Flip," for "f*cking little island people," a reference to his Filipino heritage. As for first daughter Ivanka? "Like her father," writes the author, "Ivanka was thin-skinned and could not seem to take a joke." But most of the news, such as it is, in this memoir is about Trump himself, and there's not much that even the casual observer wouldn't know: Trump thrives on chaos? Check. He has anger issues? Check. The White House is a mess? Check. The memoir serves as reinforcement, in other words, rather than as fresh meat, and as such, it's fairly dispensable, especially as the author attempts to explain why she went to the Trump side in the first place: She came from a rough side of town where wealth and power were aspirations and those who had them were role models, and as for his aberrations, well, "he was just overwhelmed, as we all were, by the awesome responsibility of leading the nation." Once the veil is lifted and she escapes "from the cult of Trumpworld," things get a little more criticalRacist? Check. Rattled? Checkbut no more newsworthy.Firmly in the secondary tier of books about the bizarre, chaotic crew at 1600 Pennsylvania Ave. Copyright Kirkus Reviews, used with permission.
More book reviews at iDreamBooks.com