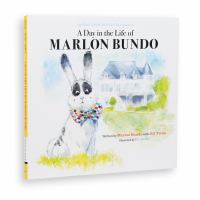 DDC classification: [E] Summary: "Meet Marlon Bundo, a lonely bunny who lives at the Naval Observatory with his Grandpa, the Vice President of the United States. But on this Very Special Day, Marlon's life is about to change forever ..."-- Front dust jacket flap.
List(s) this item appears in: Banned and Challenged Books Fiction notes: Click to open in new window
Total holds: 0

100 percent of Last Week Tonight 's proceeds will be donated to The Trevor Project and AIDS United. <br> <br> HBO's Emmy winning Last Week Tonight with John Oliver presents a children's book about a Very Special boy bunny who falls in love with another boy bunny.<br> <br> Meet Marlon Bundo, a lonely bunny who lives with his Grampa, Mike Pence the Vice President of the United States. But on this Very Special Day, Marlon's life is about to change forever...<br> <br> With its message of tolerance and advocacy, this charming bunny book for kids explores issues of same sex marriage and democracy. Sweet, funny, and beautifully illustrated, this better Bundo book is dedicated to every bunny who has ever felt different.

"Meet Marlon Bundo, a lonely bunny who lives at the Naval Observatory with his Grandpa, the Vice President of the United States. But on this Very Special Day, Marlon's life is about to change forever ..."-- Front dust jacket flap.

Last Week Tonight with John Oliver staffer Twiss debuts with an accomplished parody of Charlotte and Karen Pence's Marlon Bundo's Day in the Life of the Vice President (Regnery Kids). Bow tie-wearing bunny Marlon Bundo lives with his "grampa," Vice President Mike Pence, "in an old, stuffy house on the grounds of the U.S. Naval Observatory." He is lonely and bored until the day he falls in love with bunny Wesley: "He was bunny-beautiful." Readers are sure to agree: Wesley is floppy-eared, butterscotch colored, and wears a geeky-chic pair of blue eye glasses. After a perfect day together, Marlon and Wesley announce plans to marry. Animal friends, including a badger, a bejeweled turtle, and a hedgehog, work together to defeat-via casting their ballots-the Stink Bug, an impish green figure in a suit and tie who insists that "Boy Bunnies Don't Marry Boy Bunnies!" While the most likely readers will initially be the adults who pick up on the allusions to Trump-era politics, there's much for kids to like in Keller's (a pseudonym of Gerald Kelley) funny, earnest cast of anthropomorphic animals. A portion of proceeds from sales go to the Trevor Project and AIDS United. Ages 5-8. (Mar.) © Copyright PWxyz, LLC. All rights reserved.

Vice President Pence's daughter's (real-life) pet bunny relates falling in love with another boy bunny, to the consternation of overbearing, obnoxious, in-charge (read: president) Stink Bug: "Boy Bunnies Marry Girl Bunnies...This Is the Way It Has Always Been. You. Are. Different. And Different Is Bad." As satire, this is lots of fun (and effective: "Stink bugs are temporary. Love is Forever"); as a picture book, it's a little scattered. Adorable progressive-leaning critters populate the illustrations. (c) Copyright 2019. The Horn Book, Inc., a wholly owned subsidiary of Media Source, Inc. No redistribution permitted.

In direct response to Charlotte Pence and Karen Pence's anodyne Marlon Bundo's A Day in the Life of the Vice President (2018), a lifted middle finger to Vice President Mike Pence's homophobia.Informing readers that "this story isn't going to be about [the vice president], because he isn't very fun," black-and-white bunny Marlon Bundo relates the events of his Very Special Day, which really begins when he espies Wesley, a "bunny-beautiful" lop-eared, bespectacled brown rabbit, in the garden. (In Keller's accompanying illustration, Wesley is depicted heroically from a low perspective, enhaloed in the sun's golden rays.) They hop happily together through house and garden and then decide to marry, at which point The Stink Bug (bearing a head of recognizable white hair) appears on the scene to tell them that "Boy Bunnies Don't Marry Boy Bunnies!" Marlon Bundo, Wesley, and their animal friends discuss their various differences and then vote The Stink Bug "not in charge." Attended by "two handsome grooms-otters," Marlon Bundo and Wesley are then married by a lesbian cat minister. Adult viewers of the satirical TV show Last Week Tonight with John Oliver, which is behind this stunt, will love it. However, even as it delivers its message, the story takes easy jabs at the format it's delivered in, and the result is yet another tiresome political picture book that's nominally for children but really winks at other adults over their heads. Proceeds go to the Trevor Project and AIDS United.Good for a chuckle for adults who support LGBTQ rights, but those who want to share inclusive stories with children should look elsewhere. (Picture book. 3-7) Copyright Kirkus Reviews, used with permission.