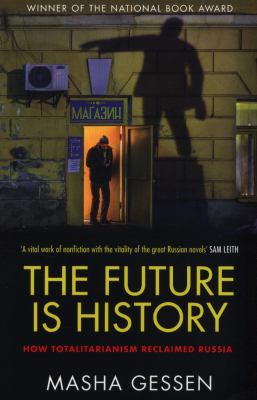 The future is history : how totalitarianism reclaimed Russia / Masha Gessen.

DDC classification: 320.947090512 Summary: In The Future is History Masha Gessen follows the lives of four Russians, born as the Soviet Union crumbled, at what promised to be the dawn of democracy. Each came of age with unprecedented expectations, some as the children or grandchildren of the very architects of the new Russia, each with newfound aspirations of their own as entrepreneurs, activists, thinkers and writers, sexual and social beings. Gessen charts their paths not only against the machinations of the regime that would seek to crush them all (censorship, intimidation, violence) but also against the war it waged on understanding itself, ensuring the unobstructed emergence of the old Soviet order in the form of today's terrifying and seemingly unstoppable mafia state. The Future is History is a powerful and urgent cautionary tale by contemporary Russia's most fearless inquisitor.
Tags from this library: No tags from this library for this title. Log in to add tags.

The sweeping, revelatory history of post-Soviet Russia from the great dissident exile.

In The Future is History Masha Gessen follows the lives of four Russians, born as the Soviet Union crumbled, at what promised to be the dawn of democracy. Each came of age with unprecedented expectations, some as the children or grandchildren of the very architects of the new Russia, each with newfound aspirations of their own as entrepreneurs, activists, thinkers and writers, sexual and social beings. Gessen charts their paths not only against the machinations of the regime that would seek to crush them all (censorship, intimidation, violence) but also against the war it waged on understanding itself, ensuring the unobstructed emergence of the old Soviet order in the form of today's terrifying and seemingly unstoppable mafia state. The Future is History is a powerful and urgent cautionary tale by contemporary Russia's most fearless inquisitor.

In this latest work, journalist and author Gessen (Where the Jews Aren't) unmasks how Russia, often port rayed as an enigmatic country, reverted back to its totalitarian roots. The author brilliantly details how the Soviets undertook the political movement Perestroika in the 1980s to the entrenchment of the current President Vladimir Putin. The narrative focuses on both the large-scale political processes and the people who were impacted by the new government policies. What is understood is that Russian citizens were ill-prepared for the emergence of democracy. The volatile 1990s created a Russian state yearning for a simpler time when the state controlled daily life. This nostalgia fed the rise of a hard-line political narrative that Putin has used to curtail liberal opposition. Gessen portrays a stark picture of why Russia is bellicose toward the West and the United States, which complements her earlier work The Man Without a Face, and Ben Judah's Fragile Empire. VERDICT A worthwhile read that descries how Putin's powerful grip on Russia developed, offering a dire warning of how other nations could fall under a similar spell of state control.-Jacob Sherman, John Peace Lib., Univ. of Texas at San Antonio © Copyright 2017. Library Journals LLC, a wholly owned subsidiary of Media Source, Inc. No redistribution permitted.

Gessen (The Brothers), the esteemed Russian-American journalist, takes an intimate look at Russia in the post-Soviet period, when the public's hopes for democracy devolved within a restricted society characterized by "a constant state of low-level dread." She structures the book around the experiences of four principal individuals who came of age in the aftermath of the U.S.S.R.'s collapse: Masha, whose activism led her to become a "de facto political prisoner"; Seryozha, the grandson of Alexander Nikolaevich Yakovlev, the politician who spearheaded the reforms of the Gorbachev era; Lyosha, a homosexual academic in a homophobic society; and Zhanna, the daughter of murdered opposition leader Boris Nemtsov. Three other figures also make regular appearances: psychoanalyst Marina Arutyunyan, sociologist Led Gudkov, and far-right ideologue Alexander Dugin. Readers gain a deeply personal view into "what it has felt like to live in Russia"-Lyosha, for instance, has had to grapple with media that "equated pedophilia and sexual violence with homosexuality"-and are presented with unique perspectives on the country during "the privations of the 1980s, the fears of the 1990s, and... the sense of shutting down that pervaded the 2000s." Throughout, Gessen expounds on Russia's development into a "mafia state" with elements of totalitarianism-a state fueled by a revanchist nationalism wherein each member of society must become "an enforcer of the existing order." She presents the somber peculiarities of modern Russia in a well-crafted, inventive narrative. Agent: Elyse Cheney, Elyse Cheney Literary. (Oct.) © Copyright PWxyz, LLC. All rights reserved.

*Starred Review* Award-winning journalist and author of a scathing biography of Vladimir Putin (The Man without a Face, 2012), Gessen is a Soviet-born daughter of dissidents who came to the U.S. as a teenager, then, drawn by the optimism of the 1990s, returned to Russia, only to come back to America after the nascent democratic movement was crushed by Putin and his cronies. She has now written an angry and sorrowful account of the gradual but relentless destruction of aspirations for democracy and freedom under Putin, tracking the broad outlines of what she sees as a descent into a new and vicious totalitarianism. Opposition political parties are marginalized. Opposing voices are silenced by murder, intimidation, or exile. The economy is again under government control, as are the mass media. Gessen also views these developments through the prism of several young Russians who were born in the mid-1980s and can bear witness to the despair and even hopelessness that now infect those who envisioned something much better. Most disturbingly, she suggests that the rise of this new mafia state was accepted and even facilitated by a general population that neither embraced nor desired freedom or democracy. This is a devastating, timely, and necessary reminder of the fragility and preciousness of all institutions of freedom.--Freeman, Jay Copyright 2017 Booklist

A brilliant if somber look at modern Russia, a failed democracy, by prizewinning journalist Gessen (The Brothers: The Road to an American Tragedy, 2015, etc.). First there were the serfs, and then "Homo Sovieticus," the gloomily obedient men, women, and children who waited in bread lines and slaved in mines and factories. Are they the avatars of the good old days? With Vladimir Putin's rise and increasingly absolutist rule, there may be something to the old saw that the Russian soul craves authoritarianism. Yet, as Gessen, who has written extensively on Putin, writes, that may flat out not be so. As she notes in this urgent chronicle, examining the Russian character through sociological instruments was frowned on, even banned, until the late 1960s, when Yuri Levada, who turns up at several points in this long narrative, began to look at how ordinary Russians thought about their society. For one thing, later surveys showed that although some wanted "rockers," "hippies," and "pederasts" (read: homosexuals) to be "liquidated," a far larger number advocated tolerance, especially younger Russians. Those younger Russians are the focus of the author's character-driven approach, a kind of nonfiction novel that compares favorably to the work of Svetlana Alexievich. One of Gessen's cases in point, a still-youngish woman named Masha, has learned to work every angle thanks to a resourceful mother who, among other things, figured out ways to "teach Soviet Jews to beat the anti-Semitic machine." By all rights, Masha, entrepreneurial and smart, ought to be in the forefront of Russian development, but having run afoul of Putin's regime, she is effectively a nonperson, "a de facto political prisoner." So it is with Zhanna, whose father, opposition leader Boris Nemtsov, was gunned down on a Moscow bridge in 2015, "with the Kremlin as the backdrop for the murder." All Gessen's players harbor the low-level dread on which totalitarian regimes thriveand all, a refrain has it, believe that their country is dead. A superb, alarming portrait of a government that exercises outsize influence in the modern world, at great human cost. Copyright Kirkus Reviews, used with permission.
More book reviews at iDreamBooks.com