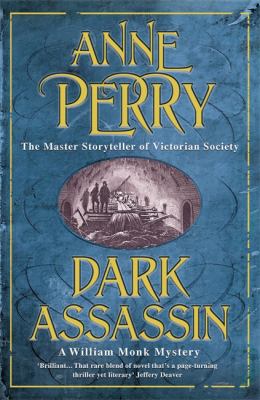 | Monk, Hester (Fictitious character) -- Fiction | London (England) -- Social conditions -- 19th century -- FictionGenre/Form: Historical fiction. | Detective and mystery fiction.DDC classification: 823.914 Subject: Two figures had been on the bridge. He had grasped hold of her. To save her, or to push her? Murder, suicide or accident? Inspector William Monk of the Thames Valley Police watches helplessly as the man and woman fall to their deaths.
Tags from this library: No tags from this library for this title. Log in to add tags.
Fiction notes: Click to open in new window

The two figures had been on the bridge. He had grasped hold of her. To save her, or to push her?

Murder, suicide or accident? Inspector William Monk of the Thames River Police watches helplessly as the man and woman fall to their deaths. Still feeling his way in a new post, Monk knows he must solve the mystery to gain the respect of his men. Soon both he and Hester find themselves powerfully involved in the story of the dead woman, Mary Havilland, and her quest to vindicate her father.

Two months previously, James Havilland had been found dead. An engineer working for the Argyll Construction Company, he was convinced that a major disaster was about to happen in the tunnels where London's desperately needed new sewer system was being built. Maddened by his obsession, he'd apparently shot himself. Mary had never accepted that. And now she was dead too. Was it chance or more sinister than that?

Two figures had been on the bridge. He had grasped hold of her. To save her, or to push her? Murder, suicide or accident? Inspector William Monk of the Thames Valley Police watches helplessly as the man and woman fall to their deaths.

Perry's 15th William and Hester Monk title finds the Victorian detective joining the Thames River police. The tale opens with his witnessing young Mary Havilland and Toby Argyll falling from Waterloo Bridge to their deaths. Was it an accident, suicide, or murder? William learns that Mary's father recently committed suicide and that the deaths are tied to a massive construction project to create modern sewer lines beneath London's streets. Both William and Hester eventually make their way into the dangerous sewers in search of the truth. The various strands linking the story elements are even more complex than usual for Perry, and the atmosphere of the sewer subculture is compelling. As usual, David Colacci narrates with a mid-Atlantic accent but handles the cockney characters and the suspense quite well. Recommended for popular collections. Michael Adams, CUNY Graduate Ctr. (c) Copyright 2010. Library Journals LLC, a wholly owned subsidiary of Media Source, Inc. No redistribution permitted.

William Monk faces special challenges in bestseller Perry's absorbing 15th novel to feature the Victorian policeman (after 2005's The Shifting Tide), as he must convince skeptical fellow officers of his competence to lead the corruption-ridden Thames River Police during a rampant crime wave. In a fogbound setting evocative of Conan Doyle, newly appointed Superintendent Monk and his river patrol watch helplessly as two young lovers plunge to their deaths from a bridge. Monk's exhaustive investigation, aided by his activist wife, Hester, soon reveals a deadly conflict between the two lovers' families over the hasty construction of a vast sewer complex built to prevent a recurrence of the "Great Stink" and typhoid epidemic of 1863. A riveting pursuit of an unknown assassin brings Monk in contact with the city's most destitute, one of several incidents highlighting the growing conflict between the abject poor and those whose houses have such luxuries as sewers and gas pipes. Some readers may have trouble with the cockney dialogue, but all will relish the last-minute twists that lead to a compelling resolution. (Mar.) (c) Copyright PWxyz, LLC. All rights reserved

Since first making his appearance in Face of a Stranger0 (1990), William Monk has continued to hunt for the memory that vanished following a nearly fatal accident. By now, much of his background has fallen into place, but he still yearns for proof that he's become a better man. His new job, superintendent of the Thames River Police, brings fresh opportunity. On a routine river patrol, Monk and his men watch in horror as a man and a woman plunge off a bridge to their deaths. Was it an accident? Urged on by his beloved wife, Hester, Monk investigates, and discovers that the woman had a mission that made suicide unlikely; she was in the midst of proving that her father's recent death was murder. To close one case, Monk must solve the other, and his pursuit of the truth leads him into the dark, stinking world beneath the streets of Victorian London. A shaky premise notwithstanding, this fifteenth episode once again demonstrates Perry's artful mastery of the period details and social concerns of the times, and series fans will appreciate the fact that Monk's genuinely appealing combination of uncertainty and determination remains largely unchanged. --Stephanie Zvirin Copyright 2006 Booklist

Inspector William Monk, now with Queen Victoria's River Police, serves a most unlikely function in his 15th case: eyewitness to a pair of mysterious deaths. As he and a crew patrol the Thames one chilly December night in 1863, Monk (Death of a Stranger, 2002, etc.) sees a man and woman arguing on Waterloo Bridge. As he watches in horror, the two go over the edge and into the icy waters, where they're drowned before Monk's men can reach them. Was it a hideous accident? Did Toby Argyll push his ex-fiancée Mary Havilland in deliberately? Or did she pull him in with her? This last fatal act remains mysterious, but there's no mystery about the events that led up to it: the shooting two months ago of Mary's father, who worked for Toby and his brother Alan, and growing evidence of corruption on the job at Argyll Brothers' extensive excavation of sewer lines the metropolis desperately needs. Despite an inventive sequence in which Monk's wife Hester Latterly takes a friend to confront a key witness, only to see her authority squelched in a deplorably ingenious way, the seesaw mystery of who killed Toby, Mary and James Havilland remains slight and unconvincing. Even so, the powerful image of subterranean skullduggery tirelessly proceeding beneath the heart of the city, brilliantly exploited in several key scenes, supplies just the right metaphor for the Victorian muckraking Perry might as well have patented. Copyright ©Kirkus Reviews, used with permission.
More book reviews at iDreamBooks.com