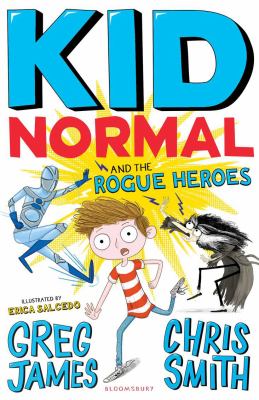 DDC classification: 823.92 Summary: Not all heroes have superpowers. Don't believe us? Well Murph Cooper is living proof. Since becoming Kid Normal, he and the Super Zeroes have been catching baddies all over the place. But being a hero is about to get a whole lot harder ... Far away in a top-secret prison, the world's most feared supervillain has broken a thirty year silence. His first words?
Tags from this library: No tags from this library for this title. Log in to add tags.

'So funny, it's almost criminal' INDEPENDENT
'Outrageous capers' GUARDIAN
The first book in the Kid Normal series was shortlisted for the Waterstones Children's Book Prize 2018

Not all heroes have superpowers.
Don't believe us? Well Murph Cooper is living proof. Since becoming Kid Normal, he and the Super Zeroes have been catching baddies all over the place. But being a hero is about to get a whole lot harder ...
Far away in a top-secret prison, the world's most feared supervillain has broken a thirty year silence. His first words?
'Bring Kid Normal to me!'

Not all heroes have superpowers. Don't believe us? Well Murph Cooper is living proof. Since becoming Kid Normal, he and the Super Zeroes have been catching baddies all over the place. But being a hero is about to get a whole lot harder ... Far away in a top-secret prison, the world's most feared supervillain has broken a thirty year silence. His first words?

In this tongue-in-cheek middle grade adventure, a kid without superpowers nevertheless discovers his true calling when he's accidentally enrolled in a secret school for superhumans. Eleven-year-old Murph Cooper doesn't have high hopes for the school, his fifth one in as many years thanks to his mother's many work-related moves. It doesn't help when he's the only normal human in a place where people can fly, control weather, move at super-speed, and summon tiny horses (not every power, or Capability-"Cape" for short-is a winner). Murph unexpectedly makes friends with some of the school's other misfits, which comes in handy when a bizarre villain attacks the school and captures everyone else. Now only Murph and his friends can save the day. This lighthearted caper from BBC radio stars James and Smith is packed with dry wit, snarky narrative asides, and an unabashed eschewing of subtlety (the school's headmaster, a former superhero, is Mr. Souperman). Salcedo's playfully frenetic illustrations complement James and Smith's silly adventure and its good-natured sense of wonder. Ages 8-12. (June) © Copyright PWxyz, LLC. All rights reserved.

Admitted by mistake to a school for children with special powers, 11-year-old Murph Cooper demonstrates that there's more to being a hero than superpowers. Though a few graduates do indeed go on to earn places in the Heroes' Alliance, it turns out that the school's major mission is shaming students into hiding their capabilities which, more often, are making one's teeth scream or summoning soup, instead of any obviously useful talents in order to lead normal lives. Hardly, though, has Murph begun to feel part of a group of friendly no-hopes, mockingly dubbed the Super Zeroes, then a wasp-man villain swoops in to create instant minions using mind-control helmets. Time for the Super Zeroes to spring into action and, through teamwork, demonstrate that leadership ability, selfless courage, and people skills are as super as any other powers. Salcedo emphasizes the farcical elements here with occasional fine-lined caricatures, but by the end, few readers will fail to see the Zeroes as true heroes, even if they don't look the part.--Peters, John Copyright 2018 Booklist

Eleven-year-old "normal kid" Murph is accidentally enrolled at a secret superhero-training school, where he befriends misfits with seemingly ineffective powers. When a mutant supervillain attacks the school, Murph and company must rescue the brainwashed students and staff. Occasional intrusive narration and tired humor drag down the plot, but fans of parody should enjoy this offbeat superhero adventure, complete with grayscale spot art. (c) Copyright 2019. The Horn Book, Inc., a wholly owned subsidiary of Media Source, Inc. No redistribution permitted.

James and Smith show how an unassuming boy can save the day: with equal parts heart and oddball jokes.Murph is a quiet 11-year-old tired of moving from place to place with his chronically underemployed mother. There's no room in this new town's public schools for Murph, but a chance encounter with an unusually muscled administrator scores him a spot in a school curiously named The School. Murph soon learns that The School is only for children with Capes, or Capabilities, the modern term for superpowers. He's allowed to stay on despite his total lack thereof, making friends with other marginalized kids including Nellie, quiet but powerful, and Mary, who flies using an umbrella. Supervillain Nektar is the absurd but menacing result of a lab accident involving wasp DNA; he is aided by his unctuous henchperson. The lengthy (300-plus pages) story is mostly carried by the goofy humor, including direct appeals to readers to shout things like "I AM THE KING OF THE PINEAPPLE PEOPLE" and other absurdist touches. The humor sometimes tips over into mean-spirited, as in the case of the motley cast of bullies depicted as ugly or fat. Brown-skinned Nellie and Asian Billy are two of the very few characters of color as depicted in Salcedo's illustrations.Funny but flawed, this meandering adventure is an addition to the current crop of not-quite-superhero titles for middle graders. (Adventure. 8-13) Copyright Kirkus Reviews, used with permission.
More book reviews at iDreamBooks.com