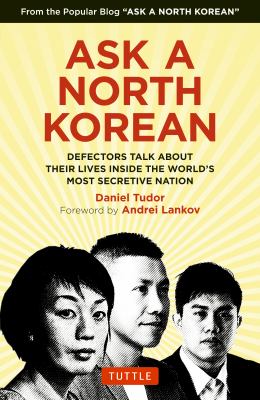 Genre/Form: Personal narratives.DDC classification: 951.9305 | 362.87095193 Summary: The long-running "Ask a North Korean" column produced by NK News in Washington D.C. invites readers to ask questions of recent North Korean defectors about everyday issues that are not generally discussed in the media. Various aspects of life in North Korea are discussed in this book through a series of interviews . These interviews show that even in the world's most authoritarian regime, there is still a degree of normality and continuity.
Tags from this library: No tags from this library for this title. Log in to add tags.

The weekly column Ask A North Korean, published by NK News , invites readers from around the world to pose questions to North Korean defectors . Adapted from the long-running column, these fascinating interviews provide authentic firsthand testimonies about life in North Korea and what is really happening inside the "Hermit Kingdom."

North Korean contributors to this book include: "Seong" who went to South Korea after dropping out during his final year of university. He is now training to be an elementary school teacher. "Kang" who left North Korea in 2005. He now lives in London, England. "Cheol" who was from South Hamgyeong in North Korea and is now a second-year university student in Seoul. "Park" worked and studied in Pyongyang before defecting to the U.S. in 2011. He is now studying at a U.S. college.
Ask A North Korean sheds critical light on all aspects of North Korean politics and society and shows that, even in the world's most authoritarian regime, life goes on in ways that are very different from what outsiders may think. Begin to understand North Korea through the eyes of those who know it best--its defectors.

"From the popular blog "Ask a North Korean""--Cover.

The long-running "Ask a North Korean" column produced by NK News in Washington D.C. invites readers to ask questions of recent North Korean defectors about everyday issues that are not generally discussed in the media. Various aspects of life in North Korea are discussed in this book through a series of interviews . These interviews show that even in the world's most authoritarian regime, there is still a degree of normality and continuity.

Tudor (North Korea Confidential), former Korea correspondent for the Economist, seeks to remedy what he sees as a serious lack of literature on North Korea from North Koreans themselves, compiling the testimonies of North Korean defectors to create an intimate glimpse of everyday life in the country. Using a question-and-answer format, the book allows the defectors to discuss various aspects of daily life, including the rudimentary health-care system, the lack of sex education in schools, and the country's inconsistent electrical grid, in an open and honest way. Interviewees also voice candid opinions of the Kim regime, the United States, and South Korea. While many of the answers confirm outsiders' impressions of the poverty and oppression prevailing in North Korea, other tidbits about North Korean life are surprising, especially concerning the importance that North Koreans place on family over material goods. The defectors are happy to be living freely in South Korea or Europe, but their yearning for the simpler life in North Korea, as opposed to the competitiveness and individualism of capitalist societies, is unexpected. With North Korea once more in the news, this book will enable readers to empathize with a people often forgotten as a result of the bellicosity of their government. (Mar.) © Copyright PWxyz, LLC. All rights reserved.

For Western readers, most North Korea-focused titles cover two categories, writes Tudor, former Korea correspondent for The Economist: politics and testimony-style books written by defectors who tell horror stories. What's missing are the real daily experiences of the vast majority of the North Koreans due to a remarkable shortage of North Korean voices. Proliferating defections, however, have enabled the success of the website, NK News, and its Ask a North Korean column, from which this book is drawn. Covering such topics as Media and Promotion, The Outside World, Religion and Spirituality, even Love, Sex, Relationships, a panel of defectors answers questions about the quotidian (jobs, taxes, cars), the expected (secret service, censorship, reunification), and the surprising (funerals, the military's pretty-boy privates, skinny jeans). Given current headlines, historical and sociopolitical interest, and even schadenfreude-laden curiosity, this is a valuable book, even as Tudor's contributions go beyond providing context and ultimately, and ironically, suppress the very North Koreans he purportedly champions, especially as he repeatedly and unnecessarily asserts that North Koreans are human. Nonetheless, these voices deserve attention, compassion, and respect.--Hong, Terry Copyright 2018 Booklist
More book reviews at iDreamBooks.com