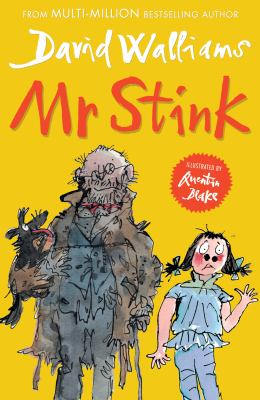 Summary: Chloe's a bit unpopular, a little lonely and completely overshadowed by her disgustingly talented sister. But then Chloe meets Mr Stink, the local tramp. Yes, he smells a bit. But he's the only person who's ever been nice to her and that includes her awful snob of a mother. So when Chloe's mother stands for election, promising to rid the town of tramps, it looks like Chloe might be about to lose her only friend.
Tags from this library: No tags from this library for this title. Log in to add tags.

The second original, touching, twisted, and most of all hilarious novel for children from David Walliams, number one bestseller and fastest growing children's author in the country - beautifully illustrated by Quentin Blake.

"Mr Stink stank. He also stunk. And if it was correct English to say he stinked, then he stinked as well..."

It all starts when Chloe makes friends with Mr Stink, the local tramp. Yes, he smells a bit. But when it looks like he might be driven out of town, Chloe decides to hide him in the garden shed.

Now Chloe's got to make sure no one finds out her secret. And speaking of secrets, there just might be more to Mr Stink than meets the eye... or the nose.

Chloe's a bit unpopular, a little lonely and completely overshadowed by her disgustingly talented sister. But then Chloe meets Mr Stink, the local tramp. Yes, he smells a bit. But he's the only person who's ever been nice to her and that includes her awful snob of a mother. So when Chloe's mother stands for election, promising to rid the town of tramps, it looks like Chloe might be about to lose her only friend.

Twelve-year-old Chloe does not fit in at her "posh" all-girls school or at home with her withdrawn father, social-climbing mother, and sickeningly perfect sister. Chloe befriends Mr. Stink (a homeless "tramp" named for his powerful smell) and his dog, Duchess, because he appears to be full of stories and to understand being misunderstood ("She wasn't homeless like him, but she felt homeless in her heart"). Mr. Stink fancies himself a "wanderer," and his lack of concern with society's judgments gives Chloe confidence. But when she invites him to move into her shed, she is not prepared for the complications. As in Walliams's The Boy in the Dress, Blake provides his trademark scrawly artwork; his images are as caricatured as the author's over-the-top characterizations, particularly Chloe's mother and Britain's prime minister, who both try to take advantage of Mr. Stink. Walliams relies heavily on gross-out humor (the references to Mr. Stink's stench are numerous) and Britishisms, which nearly overwhelm an already heavy-handed theme that everyone has secrets, flaws, idiosyncrasies, and a unique history that is of value. Ages 8-12. (Sept.) (c) Copyright PWxyz, LLC. All rights reserved.

Gr 3-6-A lonely 12-year-old girl and a local tramp hit it off, and thus begins this delightful tale. Perhaps Chloe would not need to turn to Mr. Stink (he bathes once a year) if her overbearing mother accepted her for who she is and did not seem to prefer her sister. Chloe, however, is very good at taking people for who they are. She provides Mr. Stink with shelter, food, and friendship, and in the process unburdens herself to him and learns his secrets. This British import is reminiscent of Roald Dahl's books in its silly, exaggerated storytelling, and while some words may be unfamiliar to American readers and the ending is a bit melodramatic, the characters are appealing, the situations are hilarious, and the plot moves quickly. Blake's charming illustrations appear throughout.-Mariela Siegert, Westfield Middle School, Bloomingdale, IL (c) Copyright 2010. Library Journals LLC, a wholly owned subsidiary of Media Source, Inc. No redistribution permitted.

*Starred Review* Not to put too fine a point on it, but Mr. Stink stinks! He was, author Walliams tells us, the stinkiest stinker who ever lived. Why? Well, perhaps it's because he is homeless unless you can call the old wooden bench on which he spends all his time a home. No one ever speaks to him until the day that a sweet-natured little girl named Chloe says hello. This sets in motion a series of often hilariously funny events that involve not only Chloe but her politically ambitious mother, her insufferable younger sister, a pompous television host, and even, yes, the prime minister himself (who turns out to be pretty insufferable, too). Walliams a British comedian-actor-writer has a gift for crafting memorable scenes and, in the person of Mr. Stink, has created a delightfully offbeat character who may have a secret past. The cheerfully rude tone that informs most of his story takes a sharp and rather jarring turn for the sentimental at the end, but young readers won't care, while readers of all ages will be thrilled by the in-a-word perfect illustrations of the great Quentin Blake (who else could draw a picture of stink?).--Cart, Michael Copyright 2010 Booklist

'Tis the season of Christmas and British parliamentary elections when twelve-year-old Chloe Crumb meets homeless Mr. Stink. Their friendship yields life lessons for Chloe and her family, especially politico wannabe Mrs. Crumb, or "Croooome" as she, the queen of keeping up appearances, pronounces it. Walliams's comedy of manners is full of laugh-out-loud moments, many brought to life in Blake's lively, loose-handed sketches. (c) Copyright 2011. The Horn Book, Inc., a wholly owned subsidiary of Media Source, Inc. No redistribution permitted.

A reeking vagrant instills homey togetherness in a family ruled by a domineering mother in this uneven production from the team behind The Boy in the Dress (2009). Sure that Mr. Stink's intriguing combination of gentle, refined speech and eye-watering personal hygiene signals a tragic past (which it actually does, as it turns out), 12-year-old Chloe secretly invites him to move into the shed behind her home. This touches off a series of events that lead to Chloe's pretentious mother becoming a public laughingstock on national television, provide a chance for Chloe to meet and be rude ("stick it up your fat bum!") to the oily Prime Minister and finally induce sudden, radical transformations in both of her parents as well as her villainous little sister just in time for Christmas. Refusing to change himself, Mr. Stink thereupon rambles off into the night. The funny bits, including Blake's occasional spot sketches, are really funny, but the rest of the trite tale comes off as no more than a convenient framework on which to hang them and a set of typecast characters. (Fiction. 10-12)]] Copyright Kirkus Reviews, used with permission.
More book reviews at iDreamBooks.com