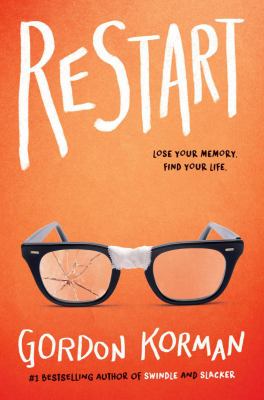 | Bullying -- Fiction | Interpersonal Relations -- Fiction | Bullies -- Juvenile fictionGenre/Form: Psychological fiction. | Fiction. | Juvenile works. | Psychological fiction.DDC classification: 813/.54 Summary: Chase does not remember falling off the roof, in fact he does not remember anything about himself, and when he gets back to middle school he begins to learn who he was through the reactions of the other kids--trouble is, he really is not sure he likes the Chase that is being revealed, but can he take the opportunity amnesia has provided and restart his life?
Tags from this library: No tags from this library for this title. Log in to add tags.

#1 New York Times bestselling author Gordon Korman harkens back to his No More Dead Dogs days in this stand-alone that takes a tone more serious than you've ever seen from him before.

He knows he's Chase. But who is Chase? When he gets back to school, he sees that different kids have very different reactions to his return.

Some kids treat him like a hero. Some kids are clearly afraid of him.

One girl in particular is so angry with him that she pours her frozen yogurt on his head the first chance she gets.

From the #1 bestselling author of Swindle and Slacker , Restart is the spectacular story of a kid with a messy past who has to figure out what it means to get a clean start.

Chase does not remember falling off the roof, in fact he does not remember anything about himself, and when he gets back to middle school he begins to learn who he was through the reactions of the other kids--trouble is, he really is not sure he likes the Chase that is being revealed, but can he take the opportunity amnesia has provided and restart his life?

When a middle school bully suffers amnesia after a bad fall, it gives him the chance to start fresh, but rebuilding his life is an uphill battle when everyone else still remembers the sins of his past. Eighth-grader Chase Ambrose attempts to reconstruct himself based on what his friends and family tell him, but the more he learns about how he mistreated others, the less he likes the old Chase. Unable to play football while he's healing, Chase joins the video club, whose members have good reason to distrust him. And while his former self did community service at a local retirement home, the new Chase comes to enjoy spending time with the residents-especially a grumpy veteran whose stories he values. In this compelling and sometimes humorous tale of nature and identity, Korman (Slacker) offers an intriguing exploration of the potential for redemption. By telling the story from multiple perspectives (Chase's, as well as those of several classmates), he conveys a complex, thorough picture of Chase's influence and impact on those around him. Ages 8-12. Agent: Elizabeth Harding, Curtis Brown. (May) © Copyright PWxyz, LLC. All rights reserved.

Gr 3-6-What would it be like to forget your whole life, your family, your friends, and even who you are? After falling off his roof, 13-year-old Chase Ambrose learns the hard way that reinventing himself can be pretty hard, especially when his past is not what he wants for his future. Before his fall, Chase was a jock, captain of the football team, following in his father's footsteps. He was also the biggest bully in his middle school, had made many students' lives miserable, and was serving a community service sentence for the damage that his bullying had caused. Even Chase's little stepsister was afraid of him. If it were up to his dad and his former best friends, Bear and Aaron, Chase would go right back to his bully-jock ways. However, the new Chase is a kinder, more sympathetic person who struggles with his past and becomes friends with his former victims. As he works with the video club geeks, he forms a relationship with elderly Mr. Solway. Korman juxtaposes Mr. Solway's sharing of his Korean War memories with Chase's search for his own past. Despite the strong antibullying theme, the story is never preachy or trite but thoughtfully presents questions about loyalty, identity, and the possibility of a new start in a way that appropriately fits the middle school setting. VERDICT A fresh approach to the familiar topic of bullying, kept credible by believable characters and events, with typical Korman humor and just the right touch of mystery. An excellent addition for all middle grade collections.-MaryAnn Karre, Binghamton, NY © Copyright 2017. Library Journals LLC, a wholly owned subsidiary of Media Source, Inc. No redistribution permitted.

Recovering after a fall, Chase regains consciousness in a hospital bed surrounded by complete strangers including his mother and brother. After he returns to school, he struggles to regain what amnesia has erased, but what he learns isn't reassuring. His two old buddies from the football team are bullies. The kids he wants to hang out with now, like those in the video club, were often their victims, and they're understandably wary of the new Chase. If he regains his memory, will he become the jerk he was before? Chapter by chapter, the very readable first-person narration shifts among seven students, giving readers access to many points of view. Their reactions to the changes in Chase's outlook vary according to their personalities and their prior relationships with him. The characters are well drawn, and the scenes in which Chase befriends an elderly veteran at an assisted facility are nicely integrated into the novel. A talented storyteller, Korman shows bullying, regret, and forgiveness from various perspectives and leaves readers with ideas to ponder.--Phelan, Carolyn Copyright 2017 Booklist

Will a bully always be a bully? That's the question eighth-grade football captain Chase Ambrose has to answer for himself after a fall from his roof leaves him with no memory of who and what he was. When he returns to Hiawassee Middle School, everything and everyone is new. The football players can hardly wait for him to come back to lead the team. Two, Bear Bratsky and Aaron Hakimian, seem to be special friends, but he's not sure what they share. Other classmates seem fearful; he doesn't know why. Temporarily barred from football because of his concussion, he finds a new home in the video club and, over time, develops a new reputation. He shoots videos with former bullying target Brendan Espinoza and even with Shoshanna Weber, who'd hated him passionately for persecuting her twin brother, Joel. Chase voluntarily continues visiting the nursing home where he'd been ordered to do community service before his fall, making a special friend of a decorated Korean War veteran. As his memories slowly return and he begins to piece together his former life, he's appalled. His crimes were worse than bullying. Will he become that kind of person again? Set in the present day and told in the alternating voices of Chase and several classmates, this finding-your-middle-school-identity story explores provocative territory. Aside from naming conventions, the book subscribes to the white default. Korman's trademark humor makes this an appealing read. (Fiction. 9-14) Copyright Kirkus Reviews, used with permission.
More book reviews at iDreamBooks.com