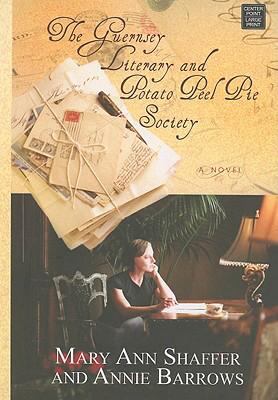 Genre/Form: Domestic fiction.DDC classification: 813/.6 Summary: In 1946, as London emerges from the shadow of World War II, author Juliet Ashton is having a terrible time finding inspiration for her next book. Then she receives a letter from Guernsey Island, and learns of a unique book club formed on the spur of the moment as an alibi to protect its members from arrest by the occupying Germans during the war. Captivated, she sets sail for Guernsey, and what she finds there will change her life forever.
Tags from this library: No tags from this library for this title. Log in to add tags.
Fiction notes: Click to open in new window

It's January 1946, and London is emerging from the shadow of World War II. Author Juliet Ashton is having a terrible time finding inspiration for her next book when she gets a letter from Dawsey Adams from Guernsey, a British island that had been occupied by the Nazis. He found her address in an old Charles Lamb volume and thinks she might be able to help him learn more about the author.

As Juliet and Dawsey exchange letters, she learns about the Guernsey Literary and Potato Peel Pie Society, a unique book club formed on the spur-of-the-moment, as an alibi to protect its members from arrest by the Germans. Captivated, Juliet sets sail for Guernsey, and what she finds there will change her life forever.

In 1946, as London emerges from the shadow of World War II, author Juliet Ashton is having a terrible time finding inspiration for her next book. Then she receives a letter from Guernsey Island, and learns of a unique book club formed on the spur of the moment as an alibi to protect its members from arrest by the occupying Germans during the war. Captivated, she sets sail for Guernsey, and what she finds there will change her life forever.

In January 1946, London is beginning to recover from World War II, and Juliet Ashton is looking for a subject for her next book. She spent the war years writing a column for the Times until her own dear flat became a victim of a German bomb. While sifting through the rubble and reconstructing her life, she receives a letter from a man on Guernsey, the British island occupied by the Germans. He'd found her name on the flyleaf of a book by Charles Lamb and was writing to ask if she knew of any other books by the author. So begins a correspondence that draws Juliet into the community of Guernsey and the members of the Literary and Potato Peel Pie Society. Named to protect its members from arrest by the Germans, the society shares their unique love of literature and life with a newfound friend. Seeing this as the subject of her next book, Juliet sails to Guernsey--a voyage that will change her life. Reminiscent of Helene Hanff's 84 Charing Cross Road, this is a warm, funny, tender, and thoroughly entertaining celebration of the power of the written word. This marvelous debut novel, sure to have book club appeal, is highly recommended for all collections. [See Prepub Alert, LJ 4/1/08.]--Susan Clifford Braun, Aerospace Corp., El Segundo, CA (c) Copyright 2010. Library Journals LLC, a wholly owned subsidiary of Media Source, Inc. No redistribution permitted.

The letters comprising this small charming novel begin in 1946, when single, 30-something author Juliet Ashton (nom de plume "Izzy Bickerstaff") writes to her publisher to say she is tired of covering the sunny side of war and its aftermath. When Guernsey farmer Dawsey Adams finds Juliet's name in a used book and invites articulate--and not-so-articulate--neighbors to write Juliet with their stories, the book's epistolary circle widens, putting Juliet back in the path of war stories. The occasionally contrived letters jump from incident to incident--including the formation of the Guernsey Literary and Potato Peel Pie Society while Guernsey was under German occupation--and person to person in a manner that feels disjointed. But Juliet's quips are so clever, the Guernsey inhabitants so enchanting and the small acts of heroism so vivid and moving that one forgives the authors (Shaffer died earlier this year) for not being able to settle on a single person or plot. Juliet finds in the letters not just inspiration for her next work, but also for her life--as will readers. (Aug.) (c) Copyright PWxyz, LLC. All rights reserved

Winding up her book tour promoting her collection of lighthearted wartime newspaper columns, Juliet Ashton casts about for a more serious project. Opportunity comes in the form of a letter she receives from Mr. Dawsey Adams, who happens to possess a book that Julia once owned. Adams is a member of the Guernsey Literary and Potato Peel Pie Society no ordinary book club. Rather, it was formed as a ruse and became a way for people to get together without raising the suspicions of Guernsey's Nazi occupiers. Written in the form of letters (a lost art), this novel by an aunt-and-niece team has loads of charm, especially as long as Juliet is still in London corresponding with the society members. Some of the air goes out of the book when she gets to Guernsey; the humorous tone doesn't quite mesh with what the islanders suffered. But readers should enjoy this literary soufflé for the most part, and curiosity about the German occupation of the British Channel Islands will be piqued.--Quinn, Mary Ellen Copyright 2008 Booklist

The German occupation of the Channel Islands, recalled in letters between a London reporter and an eccentric gaggle of Guernsey islanders. This debut by an "aunt-niece" authorial team presents itself as cozy fiction about comfortably quirky people in a bucolic setting, but it quickly evinces far more serious, and ambitious, intent. In 1946, Juliet, famous for her oxymoronic wartime humor column, is coping with life amid the rubble of London when she receives a letter from a reader, Dawsey, a Guernsey resident who asks her help in finding books by Charles Lamb. After she honors his request, a flurry of letters arrive from Guernsey islanders eager to share recollections of the German occupation of the islands. (Readers may be reminded of the PBS series, Island at War.) When the Germans catch some islanders exiting from a late-night pig roast, the group, as an excuse for violating curfew and food restrictions, invents a book club. The "Literary and Potato Peel Pie Society" is born, affording Guernseyites an excuse to meet and share meager repasts. (The Germans have confiscated all the real food.) Juliet's fractious correspondents, including reputed witch Isola, Booker, a Jewish valet who masquerades as a Lord, and many other L&PPPS members, reveal that the absent founder of their society, Elizabeth, loved Christian, a German captain. No one accuses Elizabeth of collaboration (except one crotchety islander, Adelaide) because Christian was genuinely nice. An act of bravery caused Elizabeth's deportation to France, and her whereabouts remain unknown. The Society is raising four-year-old Kit, Elizabeth's daughter by Christian. To the consternation of her editor and friend, Sidney, Juliet is entertaining the overtures, literary and romantic, of a dashing but domineering New York publisher, Markham. When Juliet goes to Guernsey, some hard truths emerge about Elizabeth's fate and defiant courage. Elizabeth and Juliet are appealingly reminiscent of game but gutsy '40s movie heroines. The engrossing subject matter and lively writing make this a sure winner, perhaps fodder for a TV series. Copyright ©Kirkus Reviews, used with permission.
More book reviews at iDreamBooks.com