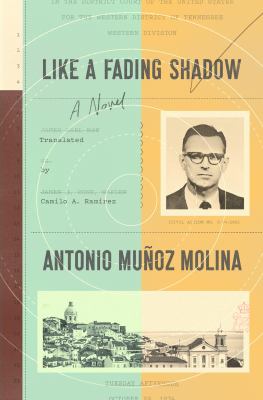 Like a fading shadow / Antonio Mu�noz Molina ; translated from the Spanish by Camilo A. Ramirez.

A hypnotic novel intertwining the author's past with James Earl Ray's attempt to escape after shooting Martin Luther King Jr.

The year is 1968 and James Earl Ray has just shot Martin Luther King Jr. For two months he evades authorities, driving to Canada, securing a fake passport, and flying to London, all while relishing the media's confusion about his location and his image on the FBI's Most Wanted list. Eventually he lands at the Hotel Portugal in Lisbon, where he anxiously awaits a visa to Angola. But the visa never comes, and for his last ten days of freedom, Ray walks around Lisbon, paying for his pleasures and rehearsing his fake identities.

Using recently declassified FBI files, Antonio Muñoz Molina reconstructs Ray's final steps through the Portuguese capital, taking us inside his feverish mind, troubled past, and infamous crime. But Lisbon is also the city that inspired Muñoz Molina's first novel, A Winter in Lisbon , and as he returns now, thirty years later, it becomes the stage for and witness to three alternating stories: Ray in 1968 at the center of an international manhunt; a thirty-year-old Muñoz Molina in 1987 struggling to find his literary voice; and the author in the present, reflecting on his life and the form of the novel as an instrument for imagining the world through another person's eyes.

Part historical fiction, part fictional memoir, Like a Fading Shadow masterfully explores the borders between the imagined, the reported, and the experienced past in the construction of identity.

"A hypnotic novel intertwining the author's past with James Earl Ray's attempt to escape after shooting Martin Luther King Jr"-- Provided by publisher.

1968. After shooting Martin Luther King Jr., James Earl Ray has evaded authorities, driven to Canada, secured a fake passport, and flew to London, all while relishing the media's confusion about his location and his image on the FBI's Most Wanted list. At the Hotel Portugal in Lisbon, he anxiously awaits a visa to Angola. For his last ten days of freedom Ray walks around Lisbon, paying for his pleasures and rehearsing his fake identities.

Translated from the Spanish.

Although this is not at all a rehabilitation of Martin Luther King assassin James Earl Ray, history-loving Molina (In the Night of Time; Manuscript of Ashes) steeps readers in the details of Ray's life, such as his clumsy handling of guns despite being a crack shot and the contradictions in how people recalled him. The novel focuses on his ten-day stay in the magically luminous city of Lisbon, Portugal, after killing King and awaiting passage to some colonial African state where his white supremacism will be appreciated. Years after 1968, Molina travels to Lisbon in search of literary enlightenment and finds it in Ray's brief association with the city; this, too, becomes part of the narrative. There is a veritable cascade of detail with multiple possibilities for moments when Ray's actions are uncertain. The result is a dual portrait of a writer seeking inspiration and then examining the clouded mind of that inspiration. VERDICT The author feels that the novel is somehow consecrated by the facts of history, and those readers who feel the same as he does will revel in this work. Others may complain of too many individual trees and not enough forest. [See Prepub Alert, 2/6/17.]-Jack Shreve, Chicago © Copyright 2017. Library Journals LLC, a wholly owned subsidiary of Media Source, Inc. No redistribution permitted.

Blurring fiction, memoir, and biography, the absorbing latest from Molina tells two stories: James Earl Ray's 10-day excursion to Lisbon while on the run after assassinating Martin Luther King Jr. in 1968, and the author's own research trip to the same city in 1987 when writing his first novel, A Winter in Lisbon. Ray, living under an alias, travels using a Canadian passport and chooses Lisbon on a whim. Once there, he sleeps with prostitutes, drinks, and attempts to gain passage to Rhodesia, where he believes the colony's white supremacist movement will embrace him. Nearly 20 years later, Molina, a new father, travels to Lisbon for the first time, looking for literary inspiration. As his travels to Portugal continue over the years, his marriage dissolves, he takes up with a new partner, and he becomes interested in Ray's brief stay. The novel reconstructs the past with incredible detail, and Molina spins multiple possibilities for moments when Ray's actions are uncertain. The result is a fascinating dual portrait of a writer looking into the clouded mind of a murderer. (July) © Copyright PWxyz, LLC. All rights reserved.

*Starred Review* The criminal eluding capture for just over one year, trying to disappear by making himself unmemorable; the writer tracking him years later, erasing himself to follow another person's journey, physical and emotional a fascinating premise made all the more intriguing by the autobiographical elements of the novel. Molina, a highly respected and award-winning Spanish author (In the Night of Time, 2013), tells the story of James Earl Ray's attempt to escape after killing Martin Luther King, Jr., in 1968; Ray's flight eventually takes him to Lisbon, where Molina was struggling to launch his writing career. Mixing the account of Ray on the run with his own coming-of-age story, Molina ponders deep philosophical questions: How does our experience of history, or our collective memory, affect our future? Do our lives and actions have lasting meaning? This is a stylistically complex novel, with shifts of perspective and time, and gorgeously layered language, a book in which to lose oneself, like Italo Calvino's If on a Winter's Night a Traveler (1979). Molina's compelling tale also evokes comparisons to Don DeLillo's historiographic metafiction, especially in Libra (1988), which explores Lee Harvey Oswald much in the manner that Molina writes about James Earl Ray.--Baker, Jen Copyright 2017 Booklist

In the days after his assassination of Martin Luther King Jr., a frantic James Earl Ray knocks around Lisbon.Spanish author Muoz Molina's (In the Night of Time, 2016, etc.) latest work is not a typical retelling of an important moment in history. Closely following Ray's path but intertwining it with Muoz Molina's own writing process, the book delicately oscillates between an author's quest for truth and a criminal's search for safety. Through short but dense narrative fragments, Muoz Molina explores the mind of a killer by comparing it to his own. "A novel is a state of mind, a warm interior where you seek refuge as you write, a cocoon that is weaved from the inside, locking you within it, showing you the world outside through its translucent concavity. A novel is a confession and a hideout," Muoz Molina writes. Readers will follow Ray through his various identities in Lisbon, London, and the United States, during the moments leading up to the assassination, through his escape, hiding, and capture. But the reader will also be witness to Muoz Molina's writing process, the moment he fell in love with his wife, his discovery of Ray's trajectory, and, finally, the completion of his project. Interestingly enough, Muoz Molina does not seem concerned with humanizing Raythis will come as a relief for some readers. Instead, the author focuses on understanding the novel as a mind, one that can be interwoven with that of other individuals and ultimately hybridized to create a body of work that "subjects life to its own limits and at the same time opens it up to an exploration of depths that are within and without you and that only you were meant to discover." A tragically poetic study of the calamity that set back the civil rights movement. Copyright Kirkus Reviews, used with permission.
More book reviews at iDreamBooks.com