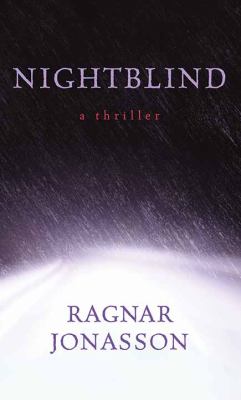 Genre/Form: Psychological fiction. | Thrillers (Fiction) | Detective and mystery fictionDDC classification: 839/.6934 Summary: "With the dark arctic winter closing in on a quiet fishing village in Northern Iceland, a policeman is murdered and it falls to Ari Thór Arason to piece together a puzzle that involves tangled local politics, a compromised new mayor, and a psychiatric ward in Reykjavik where someone is being held against their will"-- Provided by publisher.
Tags from this library: No tags from this library for this title. Log in to add tags.
Fiction notes: Click to open in new window

Ari Th#65533;r Arason: a local policeman, whose tumultuous past and uneasy relationships with the villagers in an idyllically quiet fishing village in Northern Iceland - where no one locks their doors - continue to haunt him.

First published in Iceland under the title Nattblinda by Ver�old.

"With the dark arctic winter closing in on a quiet fishing village in Northern Iceland, a policeman is murdered and it falls to Ari Thór Arason to piece together a puzzle that involves tangled local politics, a compromised new mayor, and a psychiatric ward in Reykjavik where someone is being held against their will"-- Provided by publisher.

Set five years after the action of Snowblind, Jónasson's excellent second thriller featuring Ari Thór Arason to be published in the U.S. finds Ari Thór passed over for the position of inspector in the small Icelandic town of Siglufjördur, a setback mitigated by his reunion with his girlfriend, Kristín, and the birth of their son, Stefnir. When Herjólfur, the man who got the inspector's position, dies after being blasted at close range by a shotgun near an abandoned house, Ari Thór's former superior, Tómas, oversees the investigation. Ari Thór and Tómas step on some powerful toes as they follow leads pointing to the town's mayor, Gunnar Gunnarsson; phone records show that Herjólfur called Gunnarsson late at night shortly before the attack. The mayor's claim that the conversation was about traffic strikes the pair as implausible. Ari Thór soon begins to feel like a "stranger in a place where everyone was connected and no one could be trusted completely." Jónasson plants clues fairly before a devastatingly unexpected reveal, without sublimating characterization to plot. Agent: David Headley, DHH Literary Agency (U.K.). (Dec.) © Copyright PWxyz, LLC. All rights reserved.

Ari Thór Arason (Snowblind, 2017), resentful about being passed over for promotion to inspector with the Siglufjördur, Iceland, police force, hasn't developed a warm relationship with his new boss, Herjólfur. But when Herjólfur is shot on duty, he hunts the killer with guilt-fueled vigor. Ari Thór and Tómas, Siglufjördur's previous inspector, begin by investigating rumored drug activity at the abandoned house where Herjólfur was shot. But their investigation becomes complicated when Ari Thór discovers buried secrets about a decades-old suspicious death, the town's new mayor proves suspiciously evasive about his conversation with Herjólfur the night he died, and the deputy mayor's past comes back to confront her in a violent clash. Complicating matters further, the isolated fishing village is suddenly under a media spotlight driven by the rarity of shootings in Iceland and by Herjólfur's family's police royalty status. A layer of foreboding creeps in through a psychiatric patient's well-placed journal entries, and Jónasson's sharp-edged style lends a somber, haunting note to this exposé of domestic abuse. Recommend this one which is the fifth in the series, though the second to be released in the U.S. to Arnaldur Indridason fans.--Tran, Christine Copyright 2017 Booklist

A second case looms for Ari Thr Arason, half the police force of the north Icelandic town of Siglufjrdur, when the other half gets shot in an abandoned house.Nothing much has happened in the house near the entrance to the Strkar tunnel since 1961, when one of the twins living there took a fatal header from its balcony. And Inspector Herjlfur, a recent arrival to the community, wouldn't even be investigating the report of someone seen inside if Ari Thr weren't down with the flu. As it is, his patrol ends abruptly with a shotgun blast that sends him to the hospital, hovering between life and death. Will it also send Ari Thr, who campaigned unsuccessfully for the position of inspector, into Herjlfur's place? Not a chance. Instead, the powers that be summon Tmas, the boss who preceded Herjlfur, back from Reykjavk to take charge of the case. So Tmas is also on hand when an even more recent arrival is stabbed to death. To Ari Thr's chagrin, his old chief insinuates himself into this case as well. It looks as if the eternal second fiddle (Snowblind, 2017) will have enough time on his hands to take care of his son, Stefnir, who's almost a year old, when his physician wife, Kristn, accedes to the local hospital's pleas that she return to her job. Maybe Ari Thr will even have the leisure to notice that corruption threatens the local political establishment and that Kristn is thinking seriously of leaving him. The plotting is rudimentary, but the final surprise carries a real shock; the excerpts from a 1982 diary pack a punch of their own; and of course the advent of the Icelandic winter is likely to chill hearts even below the Arctic Circle. Copyright Kirkus Reviews, used with permission.
More book reviews at iDreamBooks.com